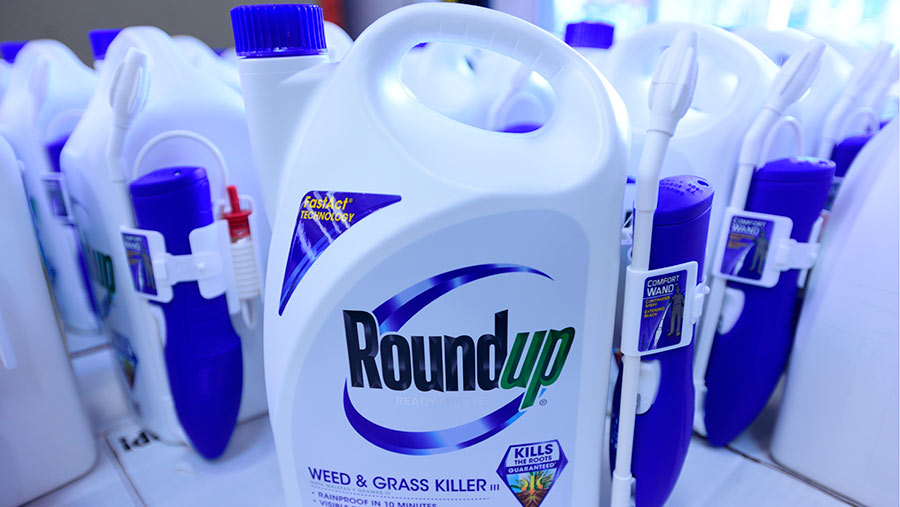 People who have high exposure to pesticides containing glyphosate have an increased risk of contracting a certain type of cancer, scientists say.

Researchers at the University of Washington (UW) have published a new scientific analysis of glyphosate (PDF), the active ingredient in Monsanto-owned Bayer’s Roundup, the world’s most popular weedkiller.

They concluded that evidence supports a “compelling link” between glyphosate and non-Hodgkin lymphoma (NHL), a type of blood cancer.

See also: Opinion – Life without glyphosate is hard to contemplate

But Bayer, which manufactures Roundup weedkiller, has rejected the findings of the meta-study and labelled it as “flawed“. A spokesman said it provides no new scientifically valid evidence and contradicts the conclusions of the extensive body of science demonstrating that glyphosate-based herbicides are not carcinogenic.

Sarah Mukherjee, CEO at the UK Crop Protection Association (CPA) said: “These independent expert regulators take their responsibility to public health incredibly seriously and apply the highest and most up to date scientific standards.

“The debate around the safety of glyphosate is more about politics and activism from those opposed to modern productive agriculture than it is about science.”

For the review, the UW researchers examined epidemiological studies published between 2001 and 2018 to determine that exposure to glyphosate may increase the risk of contracting NHL by as much as 41%.

The authors focused their review on epidemiological research in humans, but also considered the evidence from laboratory animals.

“This research provides the most up-to-date analysis of glyphosate and its link with non-Hodgkin lymphoma, incorporating a 2018 study of more than 54,000 people who work as licensed pesticide applicators,” said co-author Rachel Shaffer, a UW doctoral student.

“These findings are aligned with a prior assessment from the International Agency for Research on Cancer, which classified glyphosate as a ‘probable human carcinogen’ in 2015,” Dr Shaffer added.

In a trial last August, a US court in California awarded damages and costs against Monsanto of US$289m, to 46-year-old park worker Dewayne Johnson, who was diagnosed with cancer after using the chemical.

A jury concluded that use of the weedkiller contributed to Mr Johnson’s terminal cancer. The verdict has opened the door to potentially thousands more lawsuits against the company.

Bayer/Monsanto is appealing the judge’s decision.

The US Environmental Protection Agency (EPA) classifies glyphosate as “not likely” to cause cancer when used according to the label.

A number of international food safety regulators, including the European Food Safety Authority (Efsa), have determined that glyphosate poses minimal risk to non-target plants and animals when used appropriately.

In the UK, the Soil Association said the study was “further proof” that the UK government “needs to support farmers to end reliance on potentially harmful chemicals”.

Rob Percival, head of policy for food and health at the organic farming lobby, said: “Pesticide use in the UK has increased markedly over the past few decades, with farmers given little support to innovate and transition to more agro-ecological systems and practices, such as agroforestry and organic farming.

“By using ecosystem services first and chemicals last we can produce plentiful, healthy food while supporting wildlife – with much reduced reliance on pesticides.”

Glyphosate was introduced as a herbicide in 1974. Usage in the agricultural industry has soared, particularly since the mid-2000s when the practice of “green burndown” was introduced, in which glyphosate-based herbicides are applied to crops shortly before harvest.