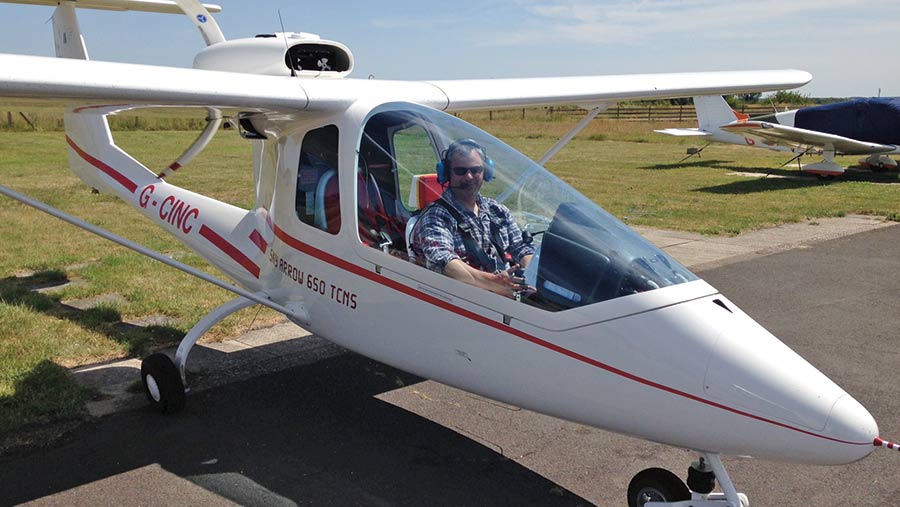 A recent tie-up that brings together agronomy and aviation expertise will provide growers with highly accurate and cost-effective aerial imagery to improve on-farm decision making.

The use of aerial imagery in precision agriculture is not a new concept – a number of service providers have been using satellites and unmanned aerial vehicles (UAVs) to provide such data for more than a decade.

Satellites can provide cost-effective crop monitoring on a landscape scale, but resolution, reliability and timeliness can all be less than desirable to meet the demand for increasingly precise application of crop inputs.

Conversely, drones can be highly accurate – depending on the sensors on board – and allow the operator to fly on demand, depending on conditions.

However, short flight times and regulations mean that UAVs can only cover small areas and are also labour intensive, which drives up cost. 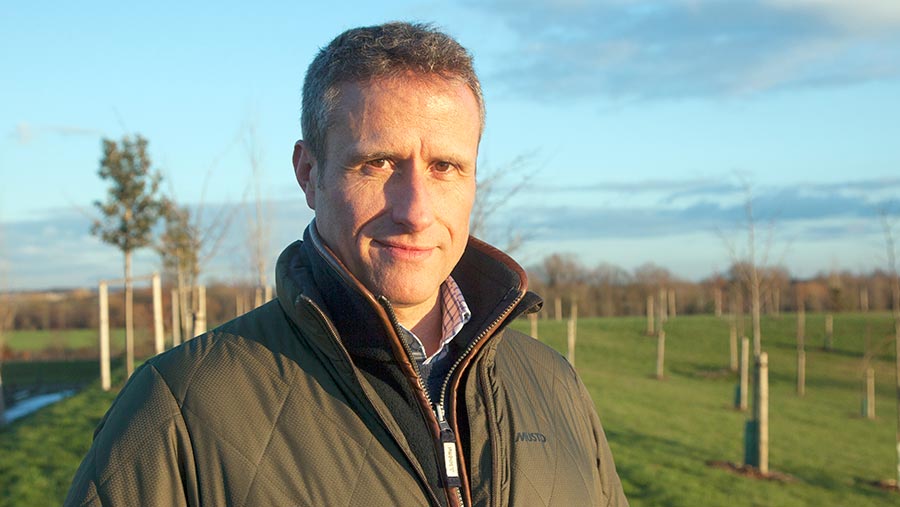 The aim is to balance the three key elements of cost, capability and availability – something he believes neither satellites or drones can achieve.

VLAs can cover vast areas of up to 10,000ha a day, which is about 100 times greater than the drones and this scaleability dilutes costs, which is passed on to the customer.

The aircraft also have the capability to fly under cloud cover on request, with a 45kg payload that includes optical, multispectral, Lidar and thermal-imaging equipment.

All have GPS systems with almost-RTK accuracy of +/-5cm and images at 7cm pixel resolution.

“There are huge efficiencies to be had from the placement of chemical, nutrient and water inputs, so we’ve made sure that the quality of the data we are gathering can match that accuracy requirement and therefore maximise the efficiency we get,” explains Mr Wright.

Spectrum Aviation has been working with major vegetable growers including G’s Fresh on crop-performance monitoring and yield prediction for some time, resulting in more accurate planting and harvesting schedules and significantly reduced waste.

In 2017, the company was acquired by AB Agri, the parent company of agronomy and grain marketing group Frontier. However, the company has retained its independence and while Frontier is a key customer and collaboration partner, Spectrum Aviation is also working in the wider sector.

Frontier’s digital commercial manager Tom Parker says since the deal, the two parties have been working on integrating the aerial imagery data into its existing business model to improve its “digital agronomy” offering.

It now allows flights to be launched at critical points or crop growth stages during the growing season, dictated by the agronomist on the ground.

For autumn-sown crops, this might include three or four flights in the autumn to monitor establishment, then from mid- to late February onwards, there are weekly flights until late June when input programmes cease.

This real-time data can be layered with all existing field information, such as soil type zones, pH and nutrient maps in the MySoyl module, which is part of Frontier’s MyFarm online farm management platform.

“It gives us a context in which to view how this season’s crop is developing and can be related to previous years as well. As your dataset gets bigger, it gets richer,” explains Mr Parker.

Mr Wright believes the accuracy of the offering will build confidence in the data and its on-demand nature, while its fast turnaround time – about 48 hours from flight scheduling to a shape file being available in the farm office – will have practical advantages, too.

It will enable the grower and/or the agronomist to pick up on any crop development problems quickly and give a better chance of successful intervention or positive adjustment of management strategy.

Examples of where the service will have an immediate effect are in areas such as crop establishment, with the imagery able to accurately detect oilseed rape plants from as early as the two-leaf stage.

This will facilitate a rapid decision on the economic viability of a crop in the face of flea beetle attack, potentially saving unnecessary and costly inputs to a crop that won’t survive.

In cereals and oilseed rape, variable-rate plant growth regulators (PGRs) based on green area index (GAI) maps are also possible and can have significant cost and yield benefits.

The maps can ensure less developed areas aren’t stunted by unnecessary or over-application and larger plants will benefit from more robust treatment, all while saving chemical.

Similarly, at the end of the season when field access is difficult, a desiccation map can be created, which helps target in-field sampling and helping to ensure the timing of glyphosate sprays are correct for optimum yield.

Mr Wright stresses that the system will not replace conventional agronomy, but complement it, and this is particularly so when considering plant disease control.

There has been much discussion and research on detecting pre-symptomatic disease infection and being able to target fungicide programmes accordingly.

However, as many diseases are so dynamic – potato blight being one example that can decimate a crop in days – working with imagery in the confines of a protectant programme is more realistic.

The sensor technology on board Spectrum Aviation’s aircraft can pick up a small patch of underperforming plants, which could indicate a localised yellow rust outbreak or early Septoria tritici infection, for example.

An agronomist can then be guided right to the area of concern to investigate and adjust future fungicide inputs according to risk.

“Instead of people wasting time walking a ‘W’ pattern and potentially missing the problem, it is much more targeted and that is important,” adds Mr Wright. 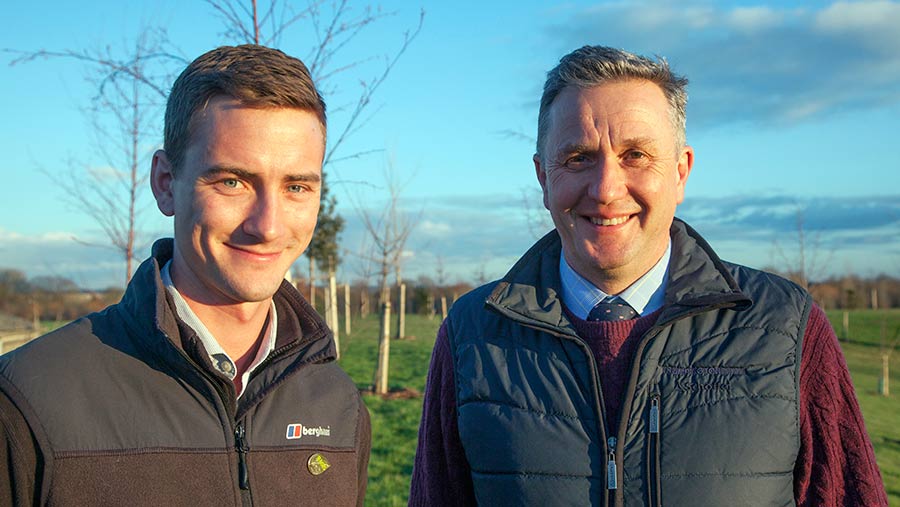 Grower David Knott and his Frontier agronomist Dom Chatwin have been trialling Spectrum Aviation’s imagery since spring 2018 and hopes it will make the estate’s crop management more efficient.

Mr Knott, who manages the 2,500ha Trumpington Estate near Cambridge, has been an early adopter of technology, having used GPS technology to variably apply P&K and seed for some time.

He had been trialling drone imagery to monitor crops for several seasons, but found that turnaround time was slow and reliability poor.

The compatibility of maps with SOYL software programme was also unsatisfactory and large file sizes a struggle to download with slow broadband speeds, so was looking for an alternative solution.

It is hoped that the switch to Spectrum Aviation’s service will remedy these issues, with more regular flights and a seamless dovetailing of data into existing platforms the two chief benefits, according to Mr Knott.

The farm will be utilising variable-rate nitrogen maps in wheat, barley and oilseed rape this spring and hopes to add variable-rate PGR applications in due course, based on lodging risk data.

Maps of blackgrass infestations have also provided a useful tool, with the distinct patches showing up on images as the grassweed was flowering last summer.

“It’s a bit retrospective, but we will be able to look at the patches year on year and see whether what we are doing is making an impact,” explains Mr Knott.

Similar insights from the imaging are also helping Mr Chatwin make more efficient use of his time on the estate, targeting areas of concern during his fieldwalking and fixing potential problems before they become critical.

One example has been the identification of compaction caused by the sugar beet harvester (see image) and have the potential to allow the targeting of remedial action, such as subsoiling. 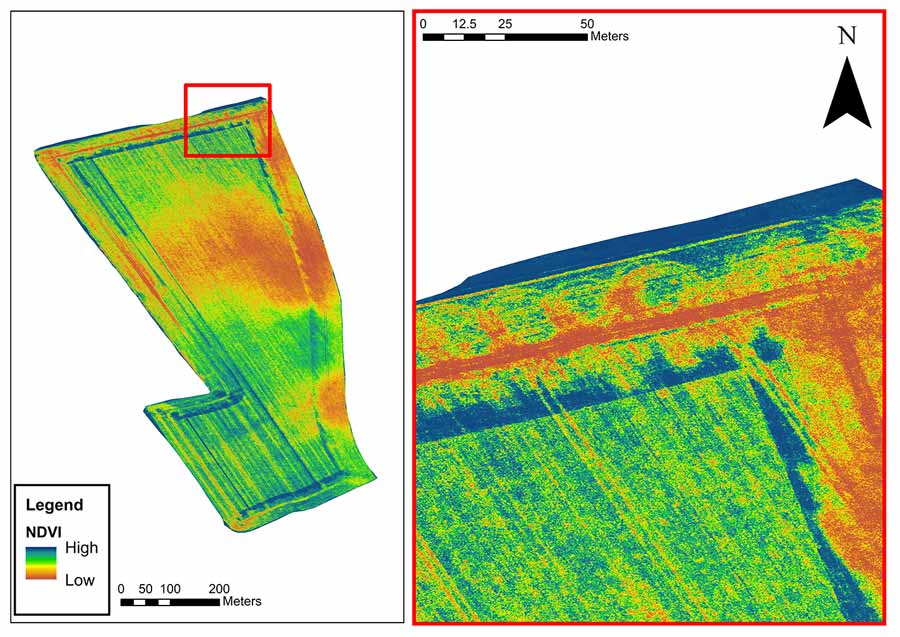 “[The maps] are a facilitator for discussion around a particular problem. They aren’t necessarily going to tell you what it is or what to do about it, but they might point out something you haven’t seen.

“You can then get to the bottom of it and it might change a decision you make next time,” explains Mr Chatwin.

In addition to agronomic benefits, Mr Knott also says the aerial surveys can accurately account for margins and environmental schemes, which may become more important post-Brexit as the farm subsidy system is overhauled.