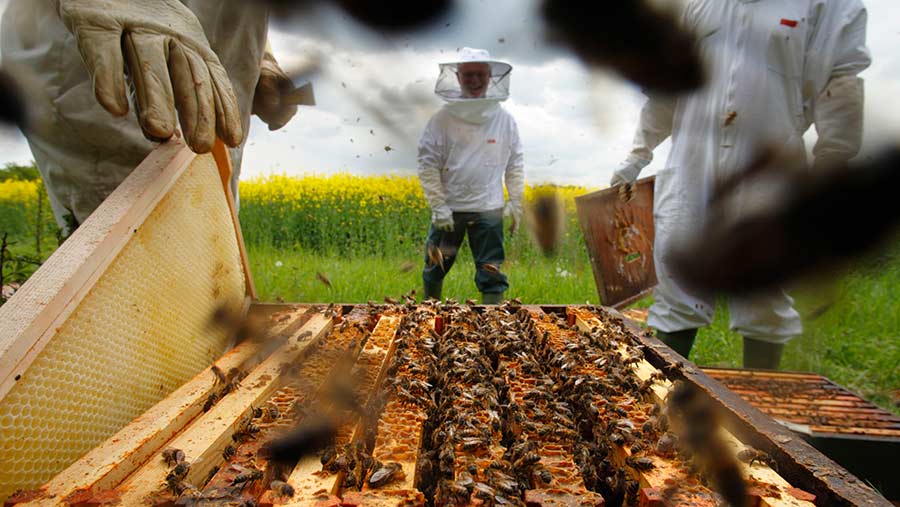 A blanket ban on a class of pesticides linked to harming bees could make growing sugar beet in the UK unviable, the NFU has warned.

Representatives from EU member states are due to meet in Brussels on 12-13 December to discuss the future of three neonicotinoids that are currently banned for use on flowering crops such as oilseed rape and sunflowers.

The European Commission Standing Committee on Plants, Animals, Food and Feed (Scopaff) will discuss a proposal to further restrict the use of these insecticides by imposing a total ban for use on all outdoor crops.

Member states may be asked to vote on the commission’s proposal for an outright ban.

Last month, in a reversal on the government’s previous position, Defra secretary Michael Gove said he would support a commission proposal to extend the ban to non-flowering crops.

Writing in the Guardian, Mr Gove said the evidence had “grown” that the risk to bees and other pollinators from neonics was “greater than previously understood”.

However, the NFU said Mr Gove’s comments are “deeply worrying” and extending the neonics ban to cover all cereals and sugar beet could seriously damage yields.

Emma Hamer, NFU senior plant health adviser, said: “In our view, the weight of evidence is not enough to condemn neonics and we cannot understand the U-turn by Michael Gove.

“Rothamsted Research and the pan-European study on neonics by the Centre for Ecology and Hydrology have both concluded the evidence is not strong enough for a total ban.”

Under a total ban, Ms Hamer said more growers would have to resort to using insecticide sprays, such as pyrethroids, which could be worse for the environment.

“It’s a massive concern, particularly for sugar beet, because there is nothing else available that can control aphids, which spread virus yellows disease in sugar beet,” she added.

“Neonics have done a great job at controlling aphids. Without them, we could see a 30-40% yield depression in sugar beet, which would then not be viable to grow in the UK.”

Better crop breeding technologies and better insecticides could be an alternative to replace neonics. But for now, neither are options, said Ms Hamer.

“If you have no alternative available, you might be forcing people to use something older that is worse, or forcing them towards something new that might turn out to be worse,” said Prof Dobermann.

More than 80 European NGOs in the “Save The Bees Coalition”, which includes Friends of the Earth Europe and Buglife UK, have signed a letter urging EU decision-makers to completely ban outdoor neonicotinoid seed treatments without further delay.