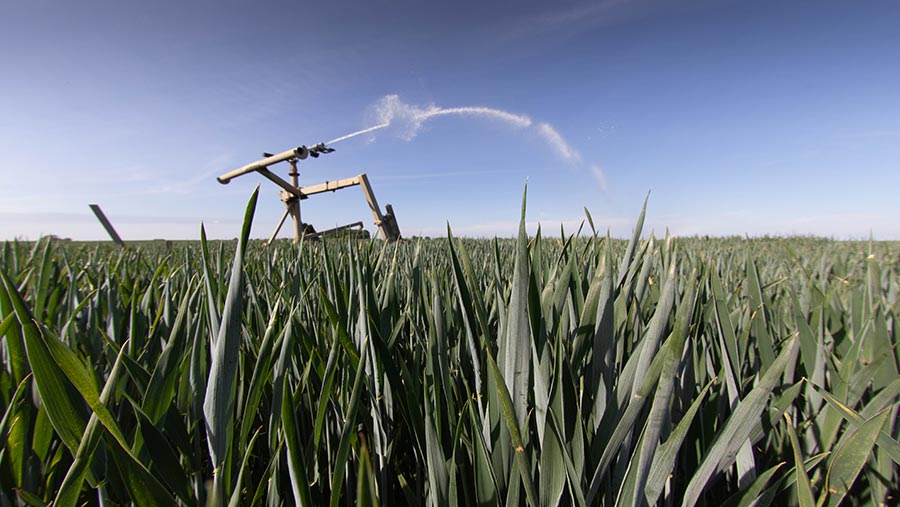 After receiving no rain in the whole of May, Lincolnshire grower Nicholas Watts and his son-in-law Robert Golland have taken drastic measures, irrigating their winter wheat crop in order to combat the dry conditions and maximise yields.

The pair, who farm at the 1,000ha Vine House Farm, near Spalding, say most of their 240ha wheat crop on organic clay loam soils is tolerating the drought well, but 32ha of wheat on their lighter more gravelly soils was struggling, after rooting and tillering was limited during the exceptionally dry April and May.

“Crops were compromised coming into the spring, with poor root structure limiting their ability to find water, making it worthwhile for us to irrigate,” says Mr Golland.

“There has been a small window of opportunity to use the irrigation equipment on the winter wheat that needs it, before we start irrigating our potato crops.”

Water was pumped from an over-winter store and an on-farm watercourse, and was applied to the crop at a rate of 248cu m/ha.

Mr Watts admits this year has been the most difficult one for farming he can remember.

“I have never experienced anything like this before here in south Lincolnshire,” he says. “We have gone through periods of too dry and too wet, and now too wet and too dry.”

After nine months of excessive rain and the disastrous winter deluge, Mr Watts says 29 February saw the last of the winter rain.

Since then, the farm has gone through three months of sunshine, drying winds and little rain, with a particularly dry April and May and temperatures reaching highs of 27C.

“It took just two months before the soils dried out. Nobody could believe just how quickly it could. We had 20 days of continuous sunshine from dawn to dusk in April, which completely dried the soil out,” he adds.

He admits that they were lucky to get crops planted last autumn because of their diverse rotation.

“We were able to get 60% of our autumn cereals in while many farmers have far less sown. Now a large slice of eastern England, the grain basket of England, are desperate for some good rain,” he says.

Winter wheat usually yields about 10t/ha on the farm, with both Mr Watts and Mr Golland hoping for improved weather in June so crops can have a final splash before harvest kicks in.