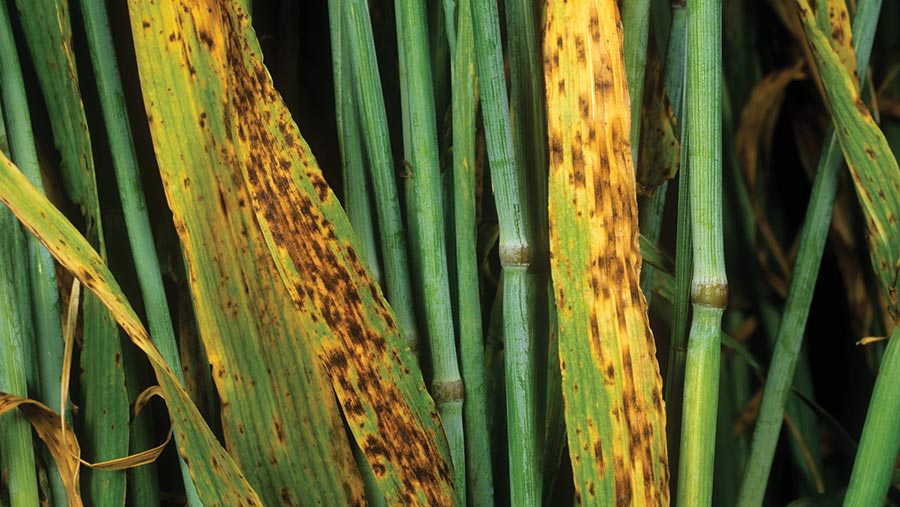 Adding a multisite fungicide to spring barley T2 flag leaf sprays in June can give a yield advantage of up to 0.5t/ha due to the control of ramularia disease.

With the banning of the popular multisite chlorothalonil, attention is focusing on folpet, which, while not matching chlorothalonil’s efficacy, is giving some control.

Iain Hamilton, field technical manager at agrochemical giant Syngenta, says a multisite such as folpet is important to reduce the incidence of ramularia leaf spot.

“It is not as good as chlorothalonil, but it has very useful activity against ramularia,” he says.

The inclusion of folpet into a standard SDHI-azole T2 spray could add 0.25-0.5t/ha to the yield of spring barley, depending on the potential severity of the disease.

Single-site systemic fungicides, such as SDHIs and azoles, can be prone to disease resistance, while no resistance has been detected in multisites such as chlorothalonil, although they are protective rather than systemic in activity.

Ramularia is often present in barley crops, but only becomes recognisable and yield-limiting after periods of plant stress, such as at flowering and in drought.

The price of folpet is about 50% higher than chlorothalonil at £9/ha in a litre-for-litre comparison, but there are only two other fungicides with good activity against the disease.

Folpet is marketed by agrochemicals group Adama as Arizona and other brands, while Syngenta has recently developed its own folpet brands, Mirror and Lamast.

Syngenta and Adama are both controlled by the same state-owned Chinese chemicals group, but operate as separate companies in the UK.

Independent trials in the ramularia hotspot of Ireland by advisory group Teagasc showed chlorothalonil was marginally ahead of folpet for controlling ramularia at T2, but folpet use still gave a £18/ha margin advantage when added to a standard SDHI-azole mix.

Work at Scotland’s Rural College (SRUC) has seen more mixed results, showing the new azole mefentrifluconazole (as in Revystar) and azole prothioconazole are the best for ramularia control, while folpet has some activity.

In such dry weather, some spring barley growers may have opted to miss out a T1 spray, and if ramularia risk is high, Mr Hamilton recommended an early T2 spray at growth stage 39 to 45, or flag leaf emerged to mid-booting.

In this situation, Mr Hamilton advises adding 1.5 litres/ha of folpet to an SDHI-azole mix. If the risk is low, he suggests 1 litre/ha at a wider window of GS39-49 or up to awns emerging.

If a T1 spray was applied with no multisite, he recommends using folpet at 1.5 litres/ha at the earlier (GS39-45) timing, and if a T1 multisite was used, apply 1 litre/ha at the wider timing window.