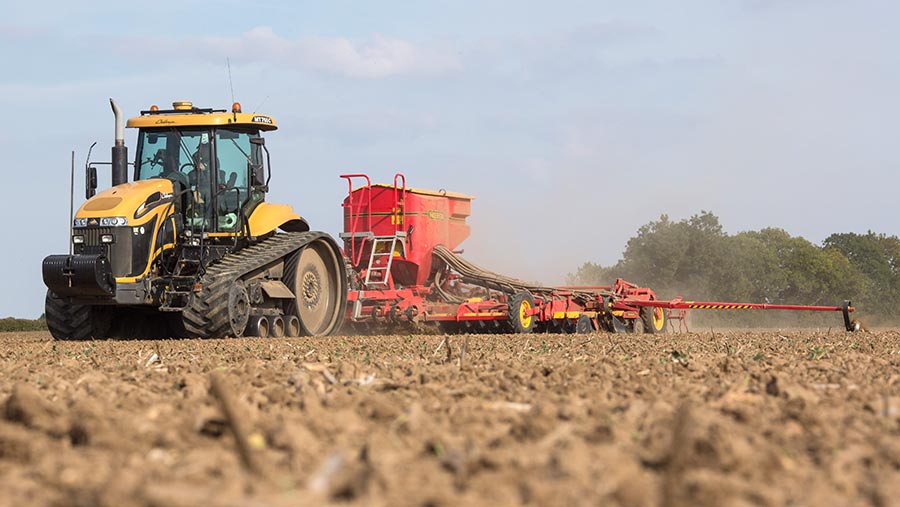 Good variety selection, improved soils and the use of seed dressings has paid off for Kent grower Terry Metson by keeping take-all at bay and lifting his second wheat yields to match those of his first.

The arable farm manager for FGS Agri farms 809ha around Pluckley on soils which range from pure sand to loamy clay, and is achieving around 9-9.5t/ha for both his first and second wheat crops.

Despite a fairly serious blackgrass problem across the mainly rented land, wheat remains an integral part of the rotation, which consists of two wheats and then a break crop of either oilseed rape, beans, maize or spring oats.

This is largely due to Mr Metson successfully managing the risk of take-all, the soil-borne fungus which is endemic across the UK and can cut yields by as much as 50%.

His approach has three key elements: variety selection, soil management and the use of seed dressing. This season Mr Metson is growing two varieties which have a proven track record as second wheats – Skyfall and Zyatt.

While data is somewhat limited on second wheat performance, some have been shown to consistently deliver as second wheats and this should be the deciding factor, not their performance as first wheats.

A good second wheat will be a vigorous grower in the autumn to build root architecture which can cope with a dry season later on.

This early growth is crucial as root function will be impeded by the fungus as levels in the soil increase, leading to necrosis of the roots and limiting water and nutrient uptake.

Mr Metson also tries not to exacerbate the take-all problem with his first wheat varieties.

KWS product development manager John Miles says that while the theory is still in academia, there appears to be a relationship between how first wheat varieties cope with take-all themselves and the level of the fungus being built-up in the soil, which will affect the following crop. 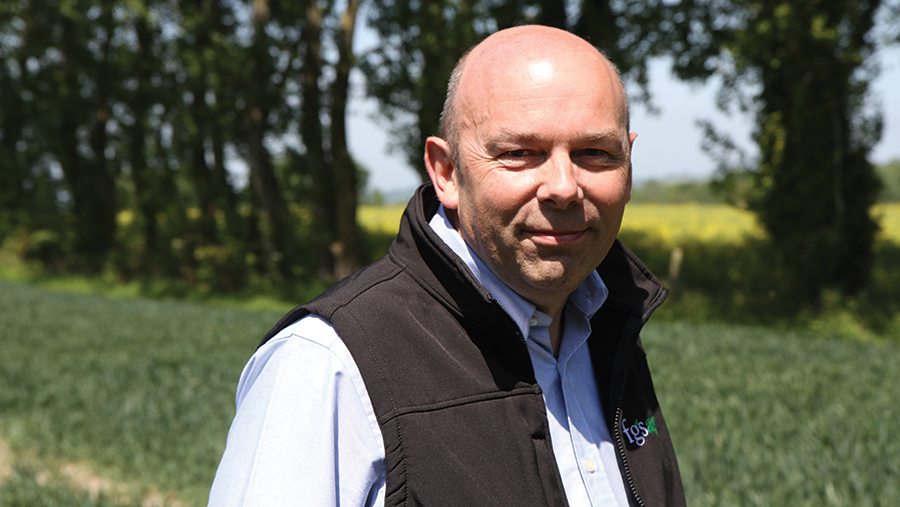 While the right variety is a crucial, soil condition is the most important factor for a successful crop, he says.

Drilling later on better land with improved drainage, rather than drilling early on marginal land which is compacted and a bit wet, is the key to limiting take-all.

Therefore to improve soil condition he is applying organic matter in the form of paper waste.

Two types are being incorporated, one with a high carbon-to-nitrogen ratio, and the other with more phosphate, more nitrogen and less carbon.

The farm has also just started applying anaerobic digestate from food waste, which has the potential to halve nitrogen use.

Feeding the crop at the right time is also important, with 50kg/ha applied in the middle of February to stimulate rooting and offset the disease.

An early dose of nitrogen followed by a main application later in the season avoids leaching losses due to root inefficiency.

However, the wet and cold conditions this season meant crops received this early application two weeks late, but would have been unlikely to be able to use it effectively any earlier.

The mild autumn and wet conditions experienced this year mean lazy rooting could be a problem and could affect how nitrogen is taken up by crops.

In the past it was traditional to plough in front of a second wheat, but now Mr Metson tries not to plough as part of his efforts to control blackgrass by exhausting the seed in the top few inches of the soil.

A Sumo Trio one-pass disc and press cultivator is instead used to achieve good consolidation around the roots to get the crop growing.

“The ground here isn’t the kindest,” his Agrii agronomist Neil Harper says. “We would like to be lower-disturbance if we could, but we need to incorporate organic matter as all the straw produced is baled and sold.”

The move away from ploughing and rolling is achieving better seed beds with a lot less work and cost, as the take-all fungus is less able to move through the soil as easily as it does through ploughed land.

Although the combination of the right variety on properly managed soils is keeping the lid on take-all, Mr Metson always uses seed dressing Latitude (silthiofam) to protect roots in the autumn during this important growth stage.

With the same fungicide programmes, this seed dressing insurance is the only additional input for second wheats on the farm.

“I treat all my second wheats with Latitude,” he says. “It’s a valuable insurance policy and has to be done. Take-all is always there ready to bite you.”

David Leaper, seed technical manager at Agrii, says: “Every other year we see a high infection. Take-all is endemic and will always build-up, but Latitude has the potential to recover half of the lost yield whatever the variety.”

This season the crop is looking much better than expected given the difficult weather. The benefits of using Latitude could be particularly evident this season as hot weather, such as that experienced recently, could see untreated crops burn out.

Although an additional cost, Latitude is helping Mr Menton aim for the top of the market by protecting the quality of his wheat and allowing him to take advantage of local outlets for milling wheats.

Around 75% of both his first and second wheats make milling wheat protein specification. “With Brexit we need to be growing crops with value and that we have a market for, and that’s milling wheats,” he says.

5 tips to keep on top of take-all

Move away from drilling early on marginal land. Instead ensure drainage is good and seedbeds are well consolidated after ploughing by rolling to enable roots to get a good start before the winter.

However, there is a difference between compaction and consolidation.

This season, heavy rain will have brought on compaction due to sitting water, so take the opportunity to map out those areas and improve them before next season.

Grow a variety which is proven as a second wheat, although data is somewhat limited.

Good second wheat varieties should be able to grow vigorously from an October drilling date to establish good root architecture which will cope in drier conditions later in the season.

Also look to grow a first wheat variety which can cope with take-all on its roots as this can help keep levels in the soil low.

Early sowings exacerbate the disease due to the warmer soils and present a longer potential period for infection, so delay until October.

While the take-all risk will be reduced, root structure also has the potential to be reduced. In a dry season poor roots will result in a yield penalty, but this can be negated using a seed dressing.

Short-term grass leys contain beneficial organisms which can protect a following second wheat, but take-all will increase drastically after a long-term grass ley.

Also be aware of including host species in cover crops, and the effect of grassweeds and cereal volunteers on maintaining the level of the fungus in the soil during the rotation.

5. Use a seed dressing

With take-all endemic in UK soils and very weather-dependent – favouring a dry autumn and winter, followed by a wet spring, growers should be prepared to invest properly in the crop to ensure good results.

It has the potential to recover up to half of the lost yield and will protect quality, allowing growers to target the milling premium.