High levels of soil residual nitrogen will enable wheat farmers to make some fertiliser savings, but this reduction should be made in later dressings.

Some soil test results are revealing high residual nitrogen levels, being significantly higher than 2016, according to Yara, with some over 300kg/ha.

Mark Tucker, Yara’s head of marketing and agronomy, said these higher levels were due to less winter leaching along with more favourable conditions for nitrogen mineralisation. They also tend to be associated with the use of organic waste materials.

The three key requirements for this process, oxygen, moisture and warmth have all been present. 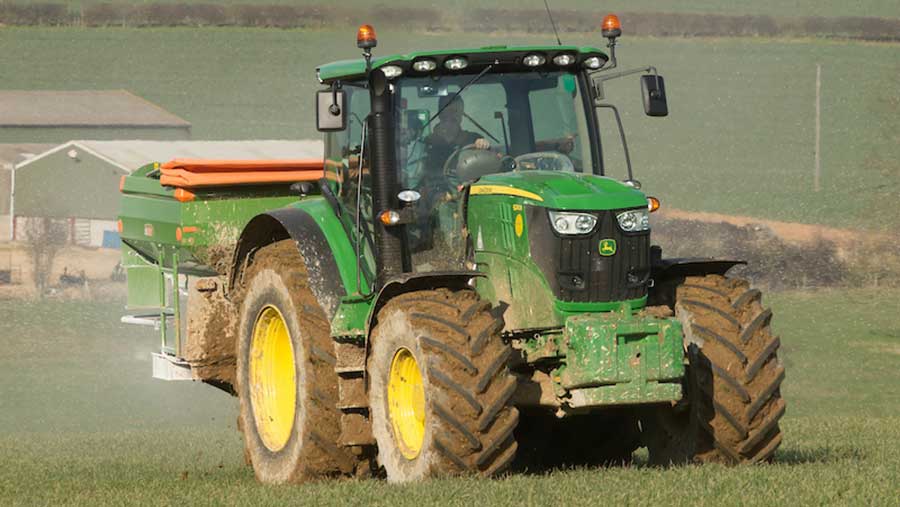 However, he warned against cutting back on early dressings. Nitrogen response data from trials over the past 20 years or more showed that the biggest yield responses were seen at this time of year, rather than later.

The first 100kg gives a return of 8:1 (yield/kg N) while the last 50kg is lower at 2:1. Therefore, he said, he advises farmers who are cutting back to go ahead with 50-70kg split now as planned and then scale back the later applications.

Mr Tucker said another risk of cutting back now was that plants would be less able to cope if there was a dry spell later on. That’s because it’s best to encourage more rooting so that plants can pick up this residual N deeper in the soil profile.

About 75% of the residual N will be below the 30cm soil horizon.

“Once you have banked this residual N, you then can cut back on the third dressing to bring the overall total down, for example from say 220kg to 150kg if soil residual nitrogen levels are 120-160 kg/ha.

The final factor to consider is economics and the RB209 recommendations are based on a breakeven point of 5:1 (cost of nitrogen divided by the value of the crop).

When farmers started out with the current crop, it was close to 5:1, he said. Since then, the increase in wheat prices meant the ratio was nearer 3:1.

So for those farmers who forward bought their fertiliser and can capitalise on the higher wheat prices since the Brexit vote, they should be looking to add an 10-15kg/ha.

Spring barley growers on low nitrogen contracts are being warned that they may need to trim back total fertiliser rates if their soil tests come back abnormally high.

He advised reducing the total amount, while sticking with a 60:40 split between dressing, the first at or shortly after drilling. Again, he advised making the cut on the second application.

Mr Tucker added that where soil residual nitrogen levels were 50-60kg higher than normal, and assuming 50% was taken up by plants, farmers might need to trim back fertiliser by 30kg/ha.

Find out more about crop nutrition and soils at this year’s Cereals event where nutrition specialists will be on hand, as well as the Soil Pit feature covering soil topics including nutrition.

The event is being held in Lincolnshire on 14 and 15 June.