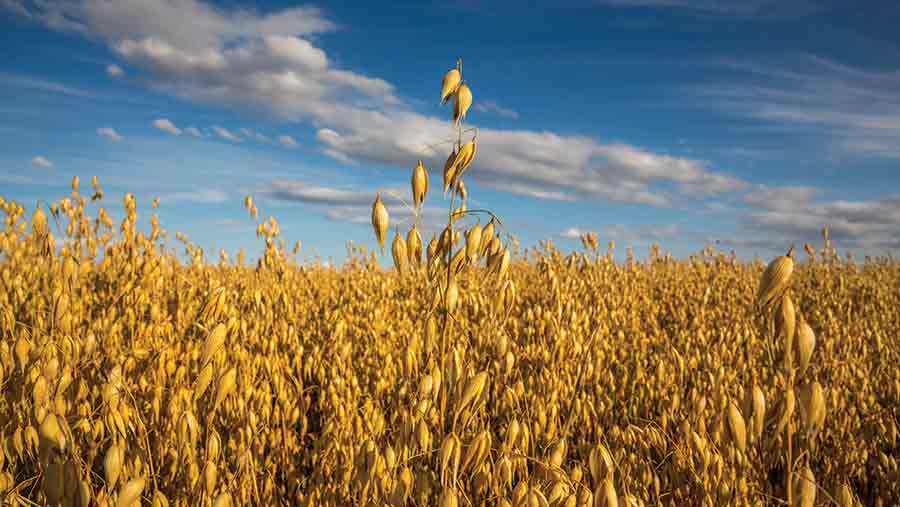 Oats will become just as healthy for growers as they are for consumers, providing the supply chain continues to work together to maintain the pace of improvements in yield, quality and agronomic techniques.

The crop is being increasingly recognised for its health and nutritional properties, as well as its contribution to farm sustainability. Thanks to innovative product development, modern plant breeding techniques and health professional endorsement, oats are on the up.

In the UK, demand for oats is growing at a rate of 4% per annum, and has doubled in the last 20 years, says Helen Plant, market analyst at ADHB.

“We’ve been in an unusual situation as production hasn’t always kept up with the pace of growth in the market,” she points out.

“We’re using a greater amount of the UK’s oat production to supply domestic human consumption and industrial markets, and although more oats are being grown, yields have struggled to rise.”

If milling demand continues to grow at its current rate, there will be a requirement for an additional 120,000t to be produced, she forecasts.

“Already we’re seeing a larger crop area for 2016 of 148,000ha, which represents a rise of 13% on the previous year. There’s plenty of evidence to suggest that growers are revisiting rotations, with many dropping oilseed rape in favour of other break crops.”

Certainly, oats are a good break crop, agrees Sarah Clarke of Adas, who adds that they are often a low input crop too. “They have a good scavenging ability, which means that they may need less nitrogen than other cereal crops, and it is easy and cheap to control any disease.”

She points out a good opportunity to increase oat yields. “The average on-farm yield in 2015 was 6t/ha, but we know that the Recommended List trials are producing yields of 9t/ha. So there’s potential to produce more and make up some of that 3t/ha shortfall.”

Traditionally, low rates of nitrogen have been applied to the crop. “The situation hasn’t been helped by the RB209 recommendations, which put the maximum amount at 140kg of N/ha.”

However, recent work suggests that much more nitrogen should be applied, if the economic optimum was to be achieved. Results of nitrogen response curves found that applications of 200kg/ha and above were showing good yield responses.

Lodging, which used to be a problem with oats, is now almost non-existent, she notes. “It can occur, especially where high seed and nitrogen rates have been used, but the newer, shorter varieties are much better at standing.”

Weeds remain the greatest barrier to the uptake of oats, she admits. “The chemical control options are limited and are unlikely to get any better. So you have to consider rotations, variety choice and cultural control techniques.”

In contrast, diseases can be controlled easily and cheaply with triazoles, with the best control of crown rust coming from two applications of cyproconazole at T1 and T2. “There hasn’t been enough work done to say whether there’s any benefit from using SDHIs on oats.”

The existing knowledge gap could be narrowed through benchmarking, where farm practice and performance with oats is analysed, for the benefit of all, suggests Chris Green of Senova.

The limited amount of agronomy work being carried out on the crop would then be supplemented by harnessing grower experience – so pooling and sharing the knowledge that would lead to improved performance.

The oat breeding programme at Ibers in Aberystwyth has been responsible for the development of over 30 new varieties since 2001, including the newly recommended winter husked oat, Maestro, and the current market leader, Mascani – both of which are marketed by Senova.

Led by Athole Marshall, the programme has introduced varieties with recognised health and nutritional properties, as well as naked oats and those with specific characters such as low lignin lines for inclusion in livestock diets and high beta glucan lines for specialist high value markets.

Oats make up 13% of the total cropped area at Robert Law’s Hertfordshire-based farming business, where they have been successfully grown for 30 years.

Having started with 17ha of the crop in 1985, he now has 160ha of Mascani being grown on a Conservation Grade contract for Jordans, as well as some for seed production on an outlying farm.

Mr Law, who farms 1,600ha on the Hertfordshire/Cambridgeshire border on a mixture of owned, tenanted and contracted land, together with a further 500ha in Nottinghamshire, described oats as a good fit for a farm where environment schemes are in place and key to his business strategy.

“Oats are a low input crop, even when they are being grown well for maximum output,” he says. “That means they have a place on a light land farming business like this, which is well-placed to earn environmental premiums from value-added contracts.”

Recent changes to his rotation have furthered their cause, he adds. “In the last two years, we’ve taken oilseed rape out of the rotation, due to problems with flea beetle control, and increased the area of rye and oats. Both crops have benefited from oilseed rape’s demise.”

He believes that the current situation with the economics of oilseed rape growing is an opportunity for oats, especially as demand for human consumption grade oats is rising and markets are on the up.

“Growers looking for an alternative break crop option will find that they make a good entry for wheat, especially as they are a take-all break. They are also much cheaper and easier to grow well than oilseed rape, and less risky too.”

Alongside their role in reducing soil-borne pathogens such as take-all, oats help to spread his harvest workload and rarely need drying. “We also have local markets for them, which reward us for a high quality, consistent product.”

There has been enormous progress with varieties since he first started growing oats, he adds. “In the old days they were either flat on the floor or taller than the combine at harvest. Now they are barely waist high, remain upright and have good disease resistance.”

The downsides of oat growing include price volatility, acknowledges Mr Law. “That’s probably no different to other crops now, but it is important to always grow them on contract. It gives some stability.”

The lack of alternative markets can be a problem, as can the limited choice of herbicides for grass weed control, he continues. “With a minority crop, there’s been little reason to invest in it. But now that oats are in the ascendancy, hopefully there will be more going into crop research.”

He adds that it has been good to be part of a growing crop and share in its success story.

“Consumer uptake of the healthy lifestyle concept means that markets are expanding and product innovation is taking place at a rapid rate. Oats aren’t getting left behind anymore.”

Mr Law’s contract with Jordans gives him access to the latest crop trials results and agronomy support, which he finds very useful. He starts drilling in the middle of October, using a seed rate of 150-160kg/ha, and continues sowing them into the winter. He applies up to 110kg/ha of nitrogen and makes two PGR applications.

Looking ahead, he is unlikely to put any more area into oats, despite the crop’s prospects. “Our rotation is well-balanced, with a whole range of crops, so it works very well as it is. Oats play a key role.”