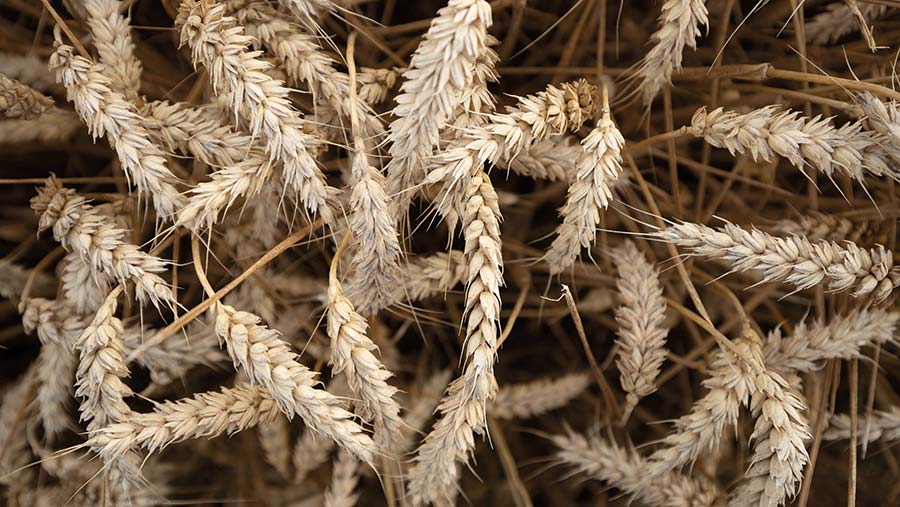 The stakes are much higher and the risk is far greater, but in most situations the margins should still be there, say commentators, when asked about the prospects for next season’s combinable crops.

With growers starting to make plans for the autumn, all are agreed that current market volatility and inflationary pressures mean that a high-investment, high-risk year is on the cards.

While existing grain supplies are still trapped in Ukraine and the conflict continues, high wheat prices are expected to remain.

See also: How growers could benefit from pioneering gene-edited wheat

But the hike in gas bills means that production costs have been soaring too – increasing almost every farm’s requirement for working capital.

With wheat well over £300/t at the time of writing this article, most farm budgets for next year will still show a profit, even accounting for the latest Andersons agricultural inflation figure of 30.6% – a level not seen for decades.

However, today’s high commodity prices are no guarantee of the same in 18-24 months’ time, growers point out.

As farming consultant and Ceres Rural partner Rob Gazely explains, the two biggest expenses on most arable farms – fuel and fertiliser – started to climb long before the Ukraine invasion but have really escalated in the past six months.

Margins will be squeezed next year, estimates AHDB, with both the price paid for fertiliser and any lower fertiliser requirement crops (for example, winter milling oats) showing in the rankings:

While the uplift in crop prices has helped ease the situation for the 2022 harvest, it’s difficult to know where things will go after that, he admits.

“Having a cashflow forecast for the next 12-15 months, a really firm grasp of the figures and an accurate, up-to-date budget is going to be so important.”

Hedging fertiliser purchases against some forward wheat sales at about £280/t for November 2023 is one possible course of action, he suggests.

“The opening price of about £625/t for ammonium nitrate for June/July delivery meant that good margins were still possible, and although that’s since gone up by £85/t for September delivery, the break-even ratio remains favourable.”

There is also help in the form of the advance injection of cash that will be available following the government’s decision that farmers will get half of their BPS early, he adds, with the first payment being made from the end of July.

Short-term loans to fund farm inputs, such as fertiliser, seed and crop protection products, are available from specialist agricultural lender Oxbury Bank, which only operates in the food and farming sector.

The “lumpy” nature of arable cashflows is recognised by the bank’s experienced staff, says Oxbury’s Nick Evans, who are aware than it can be 24 months before there’s any income from a crop of wheat and that farm output can be affected by factors outside of the farmer’s control, such as the weather.

The bank also provides long-term loans for land purchases, diversification projects and productivity improvements and will launching an asset finance product in the coming weeks.

That will go some of the way in helping with inflationary pressures and high input prices, but volatility is here to stay and farm businesses will have to find ways of coping with it, he warns.

“Be conscious of your exposure to grain merchants and other customers,” he says. “When the wheat price varies as much in one day as it used to do in a whole season, there’s good reason to be cautious.”

Nick Anderson, head of crop technology at Velcourt, believes that the prospects are good for next year, but adds that all farming businesses will have to turn over much more money than before, adding to the risk.

“It’s looking as though 2023 will be a cashflow challenge rather than a profit one,” he notes. “The margins are still positive and they haven’t wildly changed between the different crops, despite the steep rise in input costs.”

He emphasises the importance of risk management, advising farmers to take an early position in the fertiliser market and lock in a proportion of their nitrogen requirements, offsetting it against some forward grain sales so that margins are covered.

The same should be done with fuel, where possible. “It’s going to be important to have a plan and to make the best use of any strategic, long-term relationships that you have with suppliers and through buying groups,” he adds.

Rotational changes and knee-jerk reactions shouldn’t be necessary where the right business plans are in place, he continues.

“It’s about maintaining the risk/reward balance. Stewardship income, some low-input crops and having enough wheat in the rotation will all help.”

Navigating input prices and supplies will continue to be tricky while uncertainty remains and there will be a correction in the grain market at some point, he adds.

“Overall, the prospects are good. There are always unknowns at the start of any new cropping season and a crystal ball would be useful right now, but all the fundamentals are strong.”

Countryside Stewardship becomes less appealing when commodity prices are so high, but the opportunity to renew expiring schemes with an enhanced agreement should not be neglected this year.

Options that complement existing systems and help to widen rotations have a place in the current economic climate and will allow growers to build on previous success, as well as paving the way for future schemes and further nature-based solutions.

On more marginal land, the net margin of some stewardship options is better and less risky than some of the mid- to low-performing break crops, notes Katie Arden of Ceres Rural, who adds that the most readily available support payments will be through the new Sustainable Farming Incentive soil standards and Countryside Stewardship.

“Both of these should be taken seriously as revenue streams for next year,” she says. “The other tiers of the Environmental Land Management scheme are behind schedule and too far off to make an immediate difference.”