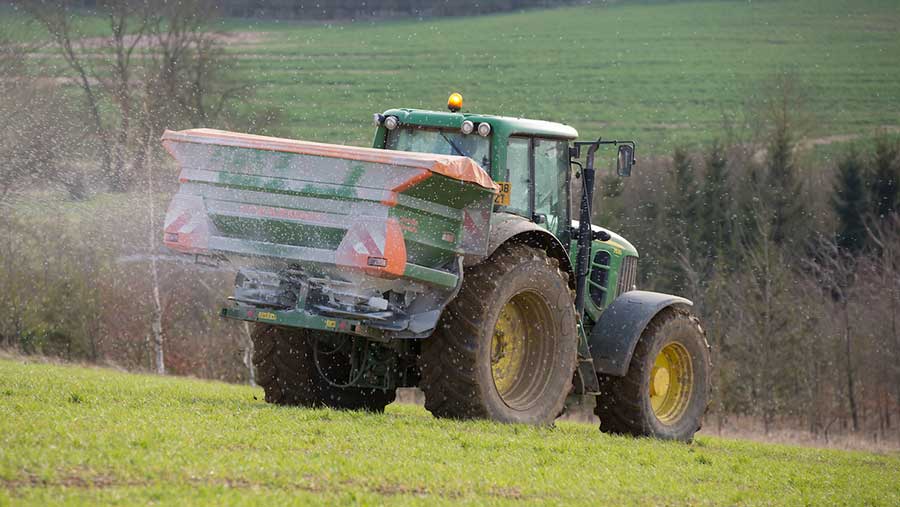 Applying potash and phosphate as part of a compound fertiliser in spring instead of separate autumn applications increases cereal yields by up to 1t/ha, according to on-farm trials.

Two Gloucestershire farms have seen yield increases in both wheat and barley by replacing traditional autumn applications of straight P and K with one spring application of a sulphur-containing NPK compound.

In addition, the switch to spring applications reduced the busy autumn workload.

Traditionally, P and K is applied in the autumn, but when soil indices are at or above 1 there may be benefits of applying it in spring instead when plants need it.

Last season, this was investigated by two growers, using a 28-8-8 NPK compound including sulphur.

For Stuart Batchelor, farm manager of Cirencester Park Farms, getting nutrition to the plant at the right time is a key focus.

“The key to achieving high specific weights and good yields of crops grown on these thin, hungry soils is to receive enough nutrition and moisture at the right time.”

He farms a variety of Cotswolds soils ranging from light brash to silty clay loam, and with topsoil depths falling to just 75mm in places.

While standard practice is to apply P and K in autumn with nitrogen and sulphur in spring, the compound was applied in the spring up to a total of 216kg N/ha across a 32m-wide trial area in a field of Relay wheat.

Ross Leadbeater, business manager (east) for CF Fertilisers, believes the yield increase is down to matching supply with greater crop demand in spring.

“There are advantages to applying these nutrients in the spring, because crops receive the nutrition they require, in the form they need it, when they need it.”

Mr Batchelor also carried out a field comparison with Irina barley, with one field receiving normal autumn-based treatments, one receiving the compound plus a later ammonium nitrate dressing and a third receiving a split dressing of the compound.

The last field yielded highest, coming in at 8.76t/ha compared with 7.8t/ha for the standard field.

“The trial results have been very encouraging, particularly on the spring barley, so we will be extending it over a larger area this season,” said Mr Batchelor.

Similar results were seen in research carried out on the Royal Agricultural University’s farm, comparing the two approaches.

“On these shallow soils there is only a limited amount of volume the plant can draw nutrients from,” said RAU farm manager Tony Norris.

Like many other farms it has focused on applying straights rather than compound fertilisers in a bid to drive up soil indices.

This time the trials were conducted using Revelation wheat and Galation barley. The wheat crop that had received spring applications of P and K again outperformed its autumn counterpart by 1t/ha, while the barley yielded an increase of 0.3t/ha.