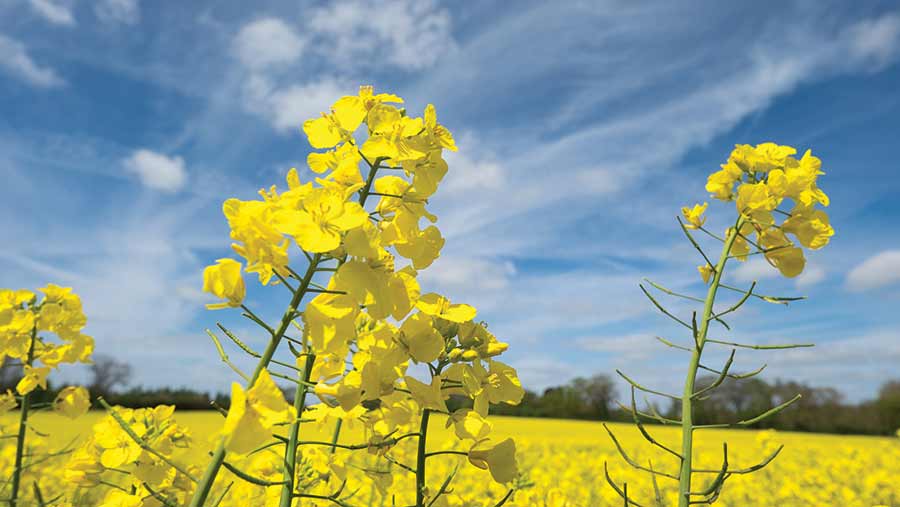 Cambridgeshire oilseed rape grower David Walston is very unlikely to use neonicotinoid-treated seed this summer despite being in a flea beetle pest hotspot. He will opt for companion cropping instead.

After comparing the differences between treated and untreated crops, he believes using neonic-treated seed is not a guarantee to keep pests at bay and only has a small effect on flea beetle populations.

The European Union banned the use of three neonicotinoids on flowering crops such as oilseed rape due to their perceived damage to bees, although their limited use was allowed in four counties badly hit by cabbage stem flea beetles last year.

“Last autumn, I had the chance to use Cruiser-treated seed, as my farm is in one of the four counties covered by the emergency use legislation,” he says.

Learn more about oilseed rape establishment at this year’s Cereals event, which many plant breeders, pesticide manufacturers and advisory groups will be attending.

This year’s event will be held on 15 and 16 June at Chrishall Grange, Cambridgeshire.

For more information and to buy tickets in advance, visit the Cereals event website

“As a result, I opted to have about 40% of the seed treated with neonicotinoids, while the rest just received a standard fungicidal seed treatment,” Mr Walston adds.

In one 18ha field, where the variety Campus was being grown, half of the crop was treated with Cruiser (thiamethoxane).

No follow-up foliar insecticides were used, but a companion crop comprising buckwheat, lentils and fenugreek was sown at the same time.

“The companion crop is simply drilled down the same pipe as the oilseed rape and adds about £20/ha to the cost of the seed,” he explains.

Mr Walston was unable to ascertain any effect of the companion crop on flea beetle numbers, having encountered very high numbers of the pest across the whole field.

“However, I did see some differences with the seed treatments. On the non-neonicotinoid-treated area, there were 10.5 larvae/plant, while the treated area had 8.6 larvae/plant. So it appeared as though the treatment had some effect on numbers,” he says.

But the neonicotinoid-treated area had been drilled a week later at a higher seed rate, so the plants were smaller, he recalls.

“When I took that into consideration and did the maths –  comparing 33 plants/sq m to 58 plants/sq m – there were actually more larvae in the neonicotinoid-treated area. The figures came out at 345 v 503 larvae/sq m,” he says.

In another 45ha field of Picto, where no neonicotinoids were used on the seed, he was able to look at the effectiveness of pyrethroid sprays.

“I was advised to spray the field in September, as thresholds had been reached, so I left about one-quarter of it unsprayed as a comparison. I then treated the whole field about a month later, this time for stem weevil,” he says.

Where just one spray had been applied, there were 3.6 larvae/plant, compared to 1.5 larvae/plant after a two-spray approach.

“Although there does seem to have been an effect from the first spray, I’m happy with the decision not to spray all of the field,” he says.

As a result of his investigations, Mr Walston remains unconvinced about the value of neonicotinoids.

“I won’t be using them this autumn. However, I will be continuing with companion crops,” he confirms.

The fate of neonicotinoid-based seed treatments has been in the headlines since the EU ban on their use on mass flowering crops, such as oilseed rape, came into place at the end of 2013.

Almost two-and-a-half years later, and after two autumn plantings, it has been estimated by the AHDB that 76% of the 2014 oilseed rape crop was affected by adult cabbage stem flea beetle, with 5% of the crop being lost that year.

In 2015, the situation was slightly less severe, as 70% of the national crop was considered to be affected, with 3% being lost.

As a result of these losses, last year’s emergency use legislation gave farms in four English counties access to neonicotinoid-treated seed, allowing a maximum of 30,000ha of oilseed rape plantings to be protected.

The permitted areas, judged to be the hardest hit by the pest, were Suffolk, Cambridgeshire, Bedfordshire and Hertfordshire, where as much as 90,000ha of the crop had been grown before the ban came into place.

This month, the NFU has again submitted an emergency application to allow growers to use the banned treatments on their oilseed rape this coming autumn.

If this application is successful, then like the previous season, the treated seed will only be available for use in fields considered to be at the greatest risk from cabbage stem flea beetle.