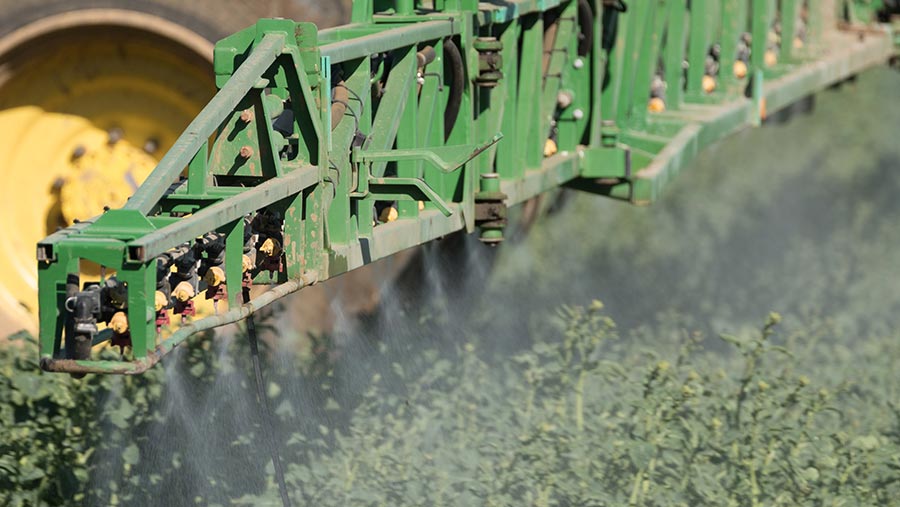 UK farm leaders and agrochemical companies insist that glyphosate remains safe and will continue to be available following a landmark ruling in California which found that the weedkiller had caused cancer in a former gardener.

The case was brought by Dewayne Johnson, who was diagnosed with terminal non-Hodgkin’s lymphoma in 2014 and claimed it was caused by exposure to glyphosate in Monsanto’s Roundup and RangerPro weedkillers.

Mr Johnson’s lawyers also claimed that Monsanto had failed to alert consumers to the health risks associated with glyphosate.

A court in California found Monsanto liable on both counts, accusing the company of “acting with malice”, awarding Mr Johnson $250m (£193m) in damages and ordering a further $39m (£30m) be paid in costs.

Biotech giant Monsanto is to appeal the decision and continues to insist that glyphosate is completely safe to humans.

“This decision does not change the fact that more than 800 scientific studies and reviews – and conclusions by the US Environmental Protection Agency, the US National Institutes of Health and regulatory authorities around the world – support the fact that glyphosate does not cause cancer,” said vice-president Scott Partridge.

A spokesman for the Crop Protection Association insisted that the ruling would have no implications for the continued availability of glyphosate to UK farmers.

“The opinions of the European Food Safety Authority (EFSA) and the European Chemicals Agency (ECHA) are newly on the books, and the EU Commission issued a new five-year licence at the end of last year. The findings of a California jury should not have any impact on that,” the spokesman said.

“Yes, certain lobby groups looking to get the product banned will ramp up their activity and there will be some political pressure. But from a regulatory point of view, glyphosate remains safe and should be available to British farmers.”

This view was echoed by NFU deputy president Guy Smith. “Last year the relevant authorities in Europe reviewed all the evidence and deemed glyphosate safe,” he said.

“EFSA and ECHA are comprised of scientific experts in toxicology, whereas the Californian jury of lay-people in this case are not.

“We see no reason why this US court case should stop UK farmers from using this safe herbicide that delivers environmental benefits by reducing greenhouse gases from extra cultivations, while keeping soil structure in good order.”

But the Soil Association, representing organic farmers in the UK, described the US case as “a dramatic blow to the future use of glyphosate”.

It said the court ruling affirmed the 2015 verdict of the International Agency for Research on Cancer – the World Health Organisation’s cancer agency – which found glyphosate to be a “probable carcinogen”.

Emma Hockridge, head of policy at the Soil Association, said UK farmers should be thinking about how they will manage without glyphosate, adding: “We need to urgently change our systems of weed control to stop relying on herbicides.

“It was disturbing in this case to hear that Monsanto had knowledge of the potentially harmful effects, but the court case also really highlights the problem with relying on chemical pesticides globally, as so little is known about the long-term environmental and health impacts.”

A potted history of glyphosate

The controversy surrounding glyphosate started in 2015 with an opinion from the International Agency for Research on Cancer (IARC), part of the World Health Organisation, that glyphosate was “probably carcinogenic to humans”.

This was disputed later that year by the European Food Safety Authority, which said this was “unlikely” – a view that was endorsed by the UN Food and Agriculture Organisation and the World Health Organisation itself in May 2016.

With political pressure mounting in Europe for a ban on glyphosate, the EU Commission granted an 18-month licence in June 2016, pending a full investigation by the European Chemicals Agency in 2017. This opinion was published in March 2017, giving glyphosate a clean bill of health.

The EU Commission secured enough member state votes in November 2017 to extend the licence for glyphosate for another five years.

In the US, on the back of the original IARC opinion, a number of legal cases were launched against Monsanto by citizens, claiming their cancers were caused by exposure to glyphosate. The case brought by Dewayne Johnson is the first to have reached a verdict.

There have been numerous claims and counter-claims during the legal process.

For example, it was suggested that Monsanto had known about the alleged cancer risk, had ghost-written academic papers supporting the safety of glyphosate, and had worked with the Environmental Protection Agency to block an investigation by the US Department of Health – claims the company denies.

In contrast, the agro-chemical industry suggested that the IARC committee had deliberately ignored material it knew existed which showed thousands of farmworkers in the US who had worked with glyphosate had no greater incidence of cancer than anyone else.

The new ruling in the California court is expected to bolster some of the other 5,000 plaintiffs seeking similar compensation. But Monsanto’s appeal case is likely to be robust.