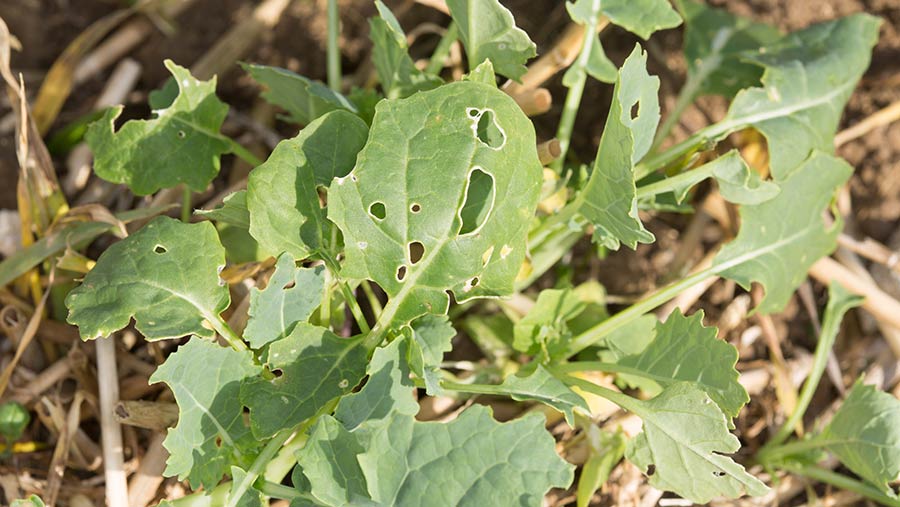 The recent hot weather has triggered an explosion in flea beetle numbers and there are widespread reports of early crop losses.

Arable and beef farmer Joe Stanley has never had problems with flea beetle attacking rape on his Leicestershire farm until this year.

Mr Stanley, a Farmers Weekly columnist, said 95% of his emerging rape plants had “shot holes” caused by the flea beetle, which can wipe out vast swathes of OSR.

The ban on the use of neonicotinoid seed dressings has meant that he, like many other farmers, has had to resort to using pyrethroids in a bid to control the pests.

Due to the #neonic ban, I'm now forced to spray insecticide on my OSR in an attempt to save the £13,000 I've invested so far. That's extra pesticide/diesel/water. I presume that was the intention of the keyboard eco-warriors who got this vital PPP banned? pic.twitter.com/RgEPVeUlYV

But Mr Stanley said this older, “dirtier” chemistry was far less effective and more harmful to wildlife, and resistance was building among the target pests.

“Farmers have had a targeted insecticide [neonicotinoids] taken out of their armoury and are having to resort to using a broad spectrum, foliar spray [pyrethroids],” he added.

“We are trying to run an efficient, productive farm business. But it’s like trying to farm with one arm tied behind your back.”

Mr Stanley said it had cost him £250/ha to establish his oilseed rape crop. He does not want to spray pyrethroids because of the problems with increasing resistance, but feels he has no choice.

“Oilseed rape is the most profitable break crop. But if I lose my 52ha this year, it will certainly make me think twice about growing it again,” he added.

Farmers as far north as North Yorkshire and Lincolnshire have been posting pictures on Twitter of flea beetle damage to emerging OSR plants. Some have reported re-drilling fields.

Psylliodes chrysocephalus causing significant levels of damage in newly emerged OSR this afternoon. This one shot off sharpish once he realised that the game was up but beetle numbers seem to be increasing dramatically by the day. Super slow-mo shows how random their leaping is. pic.twitter.com/3FxlWzS9EW

Mr Sparling said he walked fields of emerging rape crops around the Lincoln area last Wednesday (29 August) and there was minimal damage on the cotyledons. But by Friday (31 August) crops were “being hammered” by the pests and growers had resorted to spraying them with pyrethroids.

“We have significant flea beetle activity up here at the moment. There seems to be an awful lot of pressure this year,” Mr Sparling said.

“It’s very frustrating that no access to neonics seed treatments means farmers are spraying pyrethroids because they have no other choice.”

NFU deputy president Guy Smith said: “Over the last few years as we’ve lobbied for the use of neonics we’ve frequently been accused by the anti-pesticide lobby of exaggeration when it comes to flea beetle damage.

“Judging by the reports we are getting in from many members about damage to emerging rape crops, with growers already writing crops off, it looks like 2018 could turn into a bad year for flea beetle damage.

“This really brings home the importance of insecticides when it comes to growing healthy crops, but what it also reminds us that one key result of the EU/UK neonicotinoid ban is that it simply sucks in more protein imports from parts of the world such as North and South America where there is no political appetite to ban neonics. It’s the economics of the mad-house.”