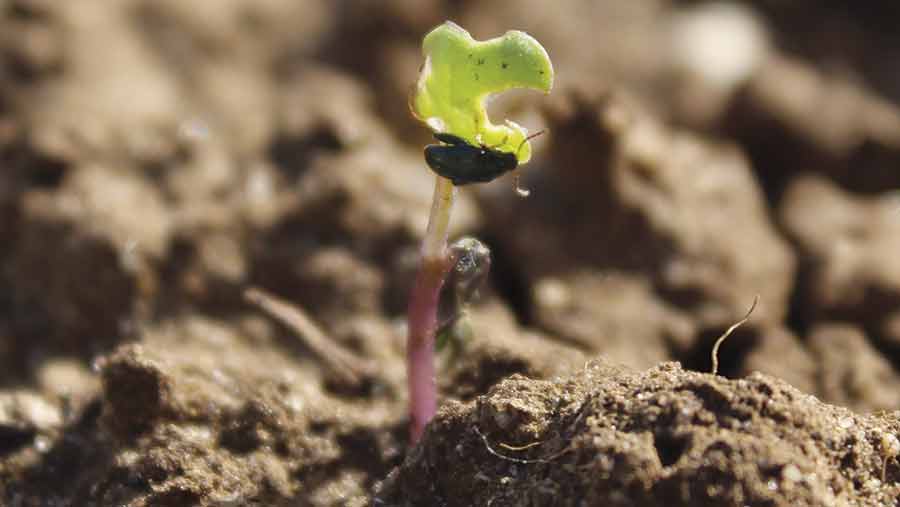 On top of the two key factors, experts at Cereals 2016 had several suggestions of more innovative approaches to the problem – including trap cropping, changes in weed control practices and the use of crop mixes.

Niab Tag’s oilseeds specialist Simon Kightley pointed out that both beetle numbers and growing conditions had to be considered before drilling begins.

“If the weather conditions are favourable and there’s enough moisture for the crop to emerge quickly and establish well, the risk of crop loss is immediately reduced,” he said.

“But seed sitting for two weeks in very dry soil won’t get the head start that is needed.”

In autumn 2015, better establishment came from early drillings and where growers had paid good attention to seed-beds, he reported.

That meant that mid-August sowings fared better than those drilled at the end of August, he added.

Variety effects were harder to pin down, as early vigour scores are not included on the AHDB’s Recommended List for good reason, continued Mr Kightley.

“Early vigour is too variable. It’s down to the season and the seed lot, so it isn’t possible to give reliable guidance on individual varieties and their ability to withstand early attack due to better autumn vigour.”

This year, the NIAB TAG trials sites used trap crops on the headlands, to see if that could help divert the pest, he added. “Time will tell if it worked. Generally, crops fared better in 2015 than in 2014.”

Dave Robinson, agronomist at Crop Dynamics agreed that oilseed rape should be drilled early. “Bigger plants are more able to tolerate pest damage. All the flea beetle pressure seems to come in the first week of September.”

Establishment method has little or no effect on the pest’s ability to cause crop loss, he noted.

“There is some anecdotal evidence that leaving the volunteers in, rather than spraying them off first, changes the crop landscape and the beetles move on. More work is needed, but it’s an interesting concept.”

Using a trap crop on the headlands is another possibility, as is sowing a mix of conventional and Clearfield varieties at a high seed rate, so that some loss can occur, he suggested.

“When it’s sprayed with Cleranda, half of the population [Clearfield varieties] survive. Of course, that depends on the beetles eating both types equally.”

Independent agronomist Jock Willmott of Strutt & Parker agrees that the aim must be for even, quick establishment from an early drilling date.

“It overwhelms the beetles,” he explained. “And by early, I mean in the first week of August.”

That’s because in the Cambridgeshire/Hertfordshire flea beetle hotspot, most of the beetles appear in the third and fourth week of August, he noted.

The downside of such an early start is that none of the grassweeds and volunteers have come through by this stage, he highlighted.

“That means it will all come up in the oilseed rape crop. So as usual there’s a balance to be achieved – you don’t want to swap one problem for another.”

Oilseed rape varieties that are faster to develop before winter and earlier to commence stem elongation can limit damage from cabbage stem flea beetle larvae, according to breeder Dekalb.

The company’s breeding trials in Cambridgeshire were badly affected by the pest for the second year in a row, revealed Anders Christensen, with around 15 larvae/plant on average.

As a result, assessments of stem losses, branching losses, earliness of flowering and plant stunting were added to ratings of speed of development and earliness of stem elongation, so that any correlations between agronomic traits and flea beetle damage could be correlated.

Elsewhere, candidate hybrid variety Dariot was on show and is the first from DSV’s PNN programme to have been bred to deliver strong performance without neonicotinoid seed treatments.

Claimed to be five days faster than Incentive in the autumn, Dariot’s immediate growth response on drilling makes it suitable for high pressure situations, suggested the company.

North Yorkshire grower Richard Wainwright has developed a flea beetle strategy that is effective on his farm.

“We get the crop in early, between 12 and 17 August, and we feed it with farmyard manure so that it gets away quickly,” he revealed. “It needs attention to detail and good timeliness, but it works.”