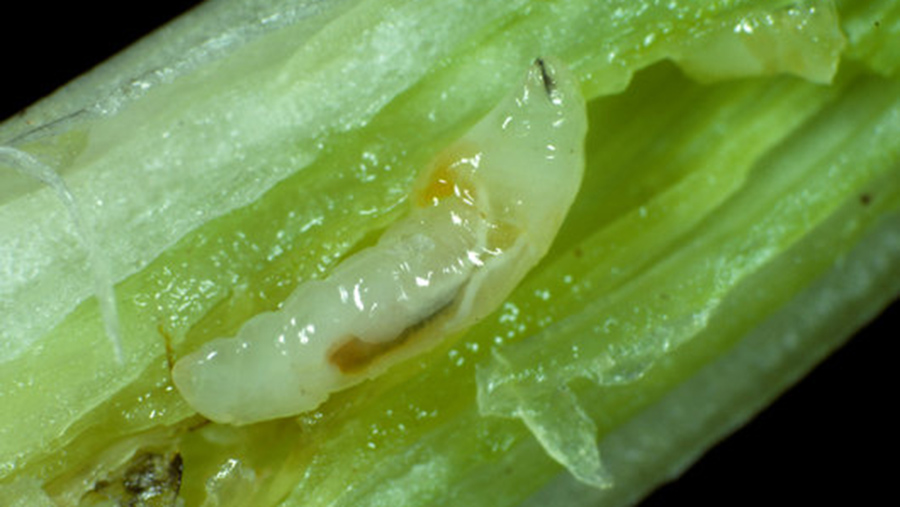 Gout fly eggs have been identified in fields of spring wheat across parts of southern England, with attacks capable of causing yield losses of up to 25%, in extreme situations.

With the area of spring sown crops higher than ever this year, growers are advised to pay particular attention to attacks from the pest, explained Peter Cowlrick, AICC member and CCC Ltd independent agronomist.

“It is quite a common sight to see gout fly eggs widespread in spring wheat crops at the moment. They normally emerge at the end of May, but warmer conditions have caused a slightly earlier emergence,” he said.

See also: Analysis: How the loss of chlorothalonil will affect farmers

However, what had surprised Mr Cowlrick was the relatively high abundance of eggs in some crops, as the area of winter wheat crops is considerably down this season, which adult flies usually use as an over-winter host.

Despite this, he suspected grassy and weedy stubbles may have provided an alternative overwintering site.

The severity of damage from gout fly attack in spring-sown crops depends on the crop’s development stage when the maggots tunnel into plant shoots.

Unlike Autumn sown wheat, where gout fly maggots typically cause the stems and tillers of crops to become stunted and swollen, with a yellow appearance and torn or ragged leaf ends, ultimately reducing the number of ears that develop.

Mr Cowlrick highlighted how spring wheat crops are most at risk during mid-stem extension as maggots migrate and feed on the peduncle, which reduces yield.

“It’s essential to keep a close eye on crops during growth stages 32-37, otherwise the main stems can fail to produce ears as pest attacks disrupt the emerging ear, causing a delayed and uneven emergence.

“Ears that are reluctant to emerge with an uneven appearance is the main symptom of gout fly,” he explained.

He warned that the only chemical that can be used as a control method is an approved pyrethoid, which should be used at a label rate and only when eggs are found on >25-50% of plants.

He also reminds growers to adhere to arthropod buffer zone restrictions and to ideally leave headlands unsprayed to reduce any potential impact on beneficials.