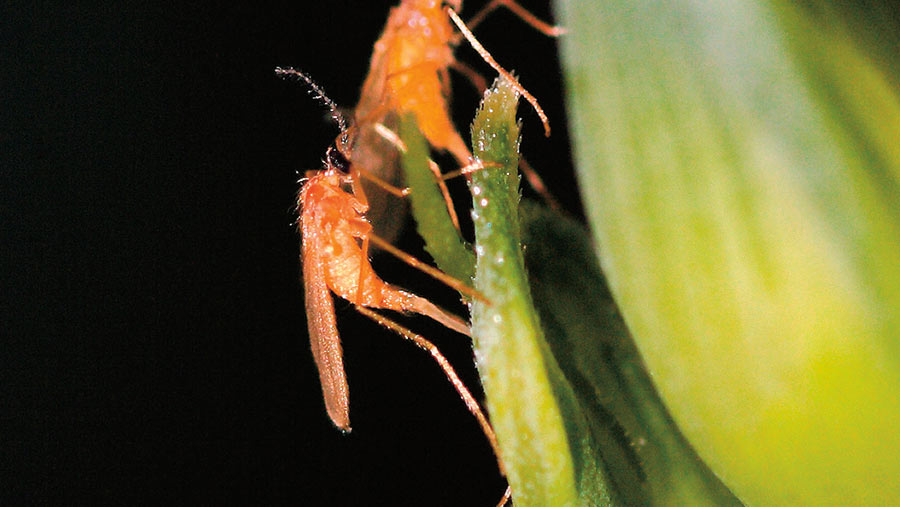 Both the orange and lemon species of wheat blossom midge were found in crops at susceptible growth stages last year, leading to localised economic damage.

However, ADAS entomologist Steve Ellis says the sporadic nature of the midge makes it difficult to predict in advance.

That is because weather conditions play a key role in determining whether the pest’s flight period coincides with the vulnerable time in the wheat crop’s development.

“For that reason, we can’t say whether we should expect a repeat of last year in terms of midge numbers, or if it was just a one-off,” he says. “There are a number of things that have to occur simultaneously for it to be damaging, which is why it’s hit and miss.”

For both the orange and lemon wheat blossom midge, a period of warm, wet weather in May, with soil temperatures above 13C, will activate pupation, with midges then flying when temperatures are above 15C.

Although male midge numbers are used as an early warning of pest activity, it is the female that is the concern – they lay eggs inside emerging wheat ears and fly between fields.

Apart from an obvious colour difference, lemon wheat blossom midge is slightly earlier and tends to emerge as the flag leaf sheath begins to extend.

The females lay eggs in larger batches of 5-20 per floret, which is why the larvae are often seen as large wriggling clusters. They feed on developing flowers, preventing grain from developing and reducing yields. 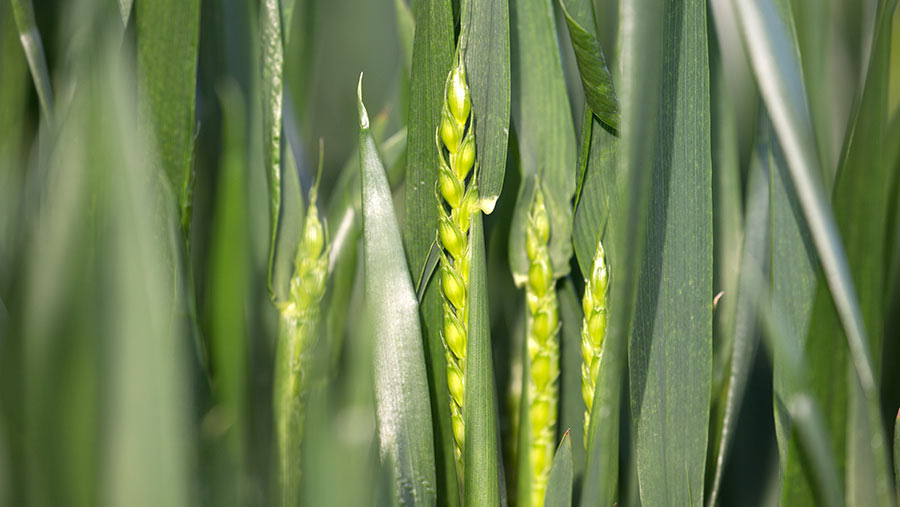 Minor infestations have little impact on yield, due to the pest’s tendency to lays its eggs in one place.

However they are not attracted to the pheromone traps often used for orange wheat blossom midge and spray thresholds have not been tested.

With orange wheat blossom midge, both pheromone and yellow sticky traps can be used where susceptible varieties are being grown and where damage from the pest has been seen in previous years.

Pheromone traps should be in place at crop ear height a week before the first ears emerge at GS45 and remain in position until the crop has reached flowering at GS61.

“These traps only catch the males and give an early warning,” explains Dr Ellis. “So where 30 or more midges are found per day, there’s likely to be a risk to crops from the females in the following week.”

More than 120 midges per trap per day is considered to be very high risk – with treatment to susceptible crops advised as soon as possible.

Yellow sticky traps, which catch both males and females, are used to monitor pest movement. They should be placed at ear height in fields at ear emergence, with a catch of 10 midges per trap indicating an increased risk.

In contrast, all of the currently recommended Group 3 varieties and most of the soft Group 4s are believed to be resistant, as are four of the 10 hard Group 4s.

There are no varieties with genetic resistance to lemon wheat blossom midge.

“They should be combined with the visual inspection method, with the highest risk being the three nights following a rise in trap catches.”

Visual crop inspection involves walking about 30m into crops in the evening and examining up to 100 ears, to see if infestation levels are high.

“In practice, if you part the crop and a cloud of midges emerges, you’re probably at threshold,” Dr Ellis says.

Where insecticides are required, there’s a choice between pyrethroids and a neonicotinoid.

“The spray timing is very tight – larvae cannot be controlled once they have moved down into the ear, only at ear emergence.”

Zantra agronomist Charles Starkings saw an increase in both orange and lemon wheat blossom midge numbers last year, but as in previous years, there was no need to spray for the pest.

He always puts a few sticky traps out in susceptible varieties to monitor for pest activity, and then checks them if the conditions in the first week of June are conducive for midge.

“It’s always worth looking in the shaded and protected parts of fields, such as those bordering woodland,” he says. “And the best time to find them is in the evenings, when the wind has dropped.”

Rainfall followed by warmth is required for the pest’s life cycle, while crops have to be at the susceptible ear emergence stage for eggs to be laid in the florets.

“In most years, the midges appear too late, after the risk has passed. Resistant varieties have been very helpful for midge management and I haven’t had to recommend a spray for years,” Mr Starkings says.

However, he did find lemon wheat blossom midge at high levels on one farm in Bedfordshire in 2018 and estimates that it had a yield penalty of 15%.

“There’s very little guidance on this species and no varietal tolerance. By the time we saw it, the damage had already been done. It needs to be spotted at flag leaf rather than ear emergence.”

Midges trapped in spiders’ webs are a really useful way of identifying activity in a crop, he adds.