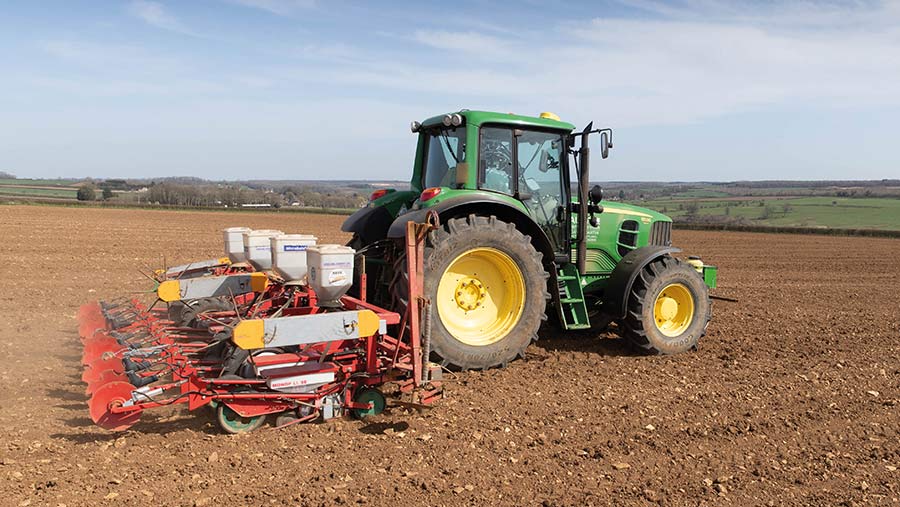 A new granular nematicide containing 45% garlic extract has been authorised for use in sugar beet following promising results against free-living nematodes – the main cause of Docking disorder.

Nemguard DE from Certis is being marketed as a timely replacement for Vydate (oxamyl), which was withdrawn from sale abruptly at the end of 2020.

As a result, the new product becomes the only control option for fields with a history of Docking disorder.

Characterised by stunted plants, root fanging and a reduction in root size, Docking disorder is caused by feeding damage by two nematode species – both of which can be prevalent on light sandy soils where sugar beet is grown.

In the spring, as the larvae hatch in the soil, they are attracted to the emerging crop plants to feed on the tap root.

Although they can be tested for, the best predictor is history – there are known pockets of light land with high nematode numbers where damage is seen if populations are left unchecked, he notes.

At this early stage of crop development, the growing tip is often killed, encouraging lateral roots to grow – giving rise to short, stubby plants and fanging.

The industry estimates that yield losses of up to 17.5t/ha occur in bad years, which tend to be associated with heavy rainfall in the spring.

Given the need for an effective solution, work done by the British Beet Research Organisation (BBRO) in 2021, in conjunction with Ecospray and Certis Europe, looked at the use of Nemguard and tested it against Vydate and an untreated control, in three in-field strip trials.

The work was carried out on free-living nematode vulnerable sites, in a year that had perfect conditions for the pest.

Although it is early days and there is further work to be done, BBRO confirmed that Nemguard worked as well as Vydate for free-living nematode management – having seen better root quality than the untreated control.

“One of the key things with the product is that it requires moisture to be effective – the nematodes have to get moving and pick it up.

The next stage is for BBRO to test it over seasons and on more sites, to see whether the results are repeated, he adds.

“Providing the product is activated, it can give useful reductions in nematode populations.”

There are no sugar beet varieties with tolerance to free-living nematode damage, so the options are very limited.

The British Beet Research Organisation is currently sponsoring a PhD looking at other approaches to reducing nematode numbers in the soil, including the effect of cover crops and biofumigation on the pest.

Nemguard needs a higher application rate than Vydate, advises Dr Bowen, with 10kg/ha being recommended for 2022.

In dry conditions, that may have to go up, as the maximum dose is 20kg/ha, which is one reason why further trials are planned.

Yorkshire beet grower and contractor Graham Liddle provided one of the trial sites for the British Beet Research Organisation’s work on Nemguard, as his farm has some suitable land with a long history of Docking disorder.

Having always made good use of Vydate when it was available, with the odd blocked spout showing up the effect of free-living nematode control on beet yields and quality, he was keen to know whether there were any effective alternatives.

Sampling showed high numbers of the pest, so part of one of his fields was used for three strip trials, comparing Nemguard to Vydate and an untreated control.

Having only just been lifted when he spoke to Farmers Weekly, he was waiting for the yield results.

“You can’t really make any conclusions from the harvester,” he says.

“But there were some visual differences in the spring and summer in the growing crop, so I do expect some positive results.”

Nemguard can be applied with the same applicators that were used for Vydate, he confirms, although they do have to be recalibrated and the hoppers should be emptied daily, or else they tend to block as the granules take up moisture.

“You are dealing with greater volumes of granules with Nemguard,” says Mr Liddle.

“Whereas with Vydate it was 6-7kg/ha, the starting recommended rate for Nemguard is 10kg/ha and could go as high as 20kg/ha as more work is done.”

Being garlic based, it does have a very strong odour, but it is a safer product option to handle, he reports.

Docking disorder has been a threat for years on his sandy loam soils, with occasional testing confirming high numbers of nematodes. Without any tolerant varieties, the only option is to use a nematicide.

“The risk is too high to take a chance,” he adds. “We can’t afford to have a crop failure.”

Growing 140ha of sugar beet at Cawood, south of York, Mr Liddle represents the North East on the NFU Sugar Board.

Beet yields are about 85-90t/ha, with sugar beet remaining an important crop for his 1,000ha business and working well in most seasons.

His only reservation about Nemguard to date is the cost. While the price per kilogramme is very similar to that of Vydate, he will need to use an extra 25% for the 10kg/ha rate.

“So, while it’s reassuring to know that we can still manage free-living nematode populations successfully and use a more environmentally friendly product, it seems as though it will add to our growing costs at a time when all of our other costs are rising.”