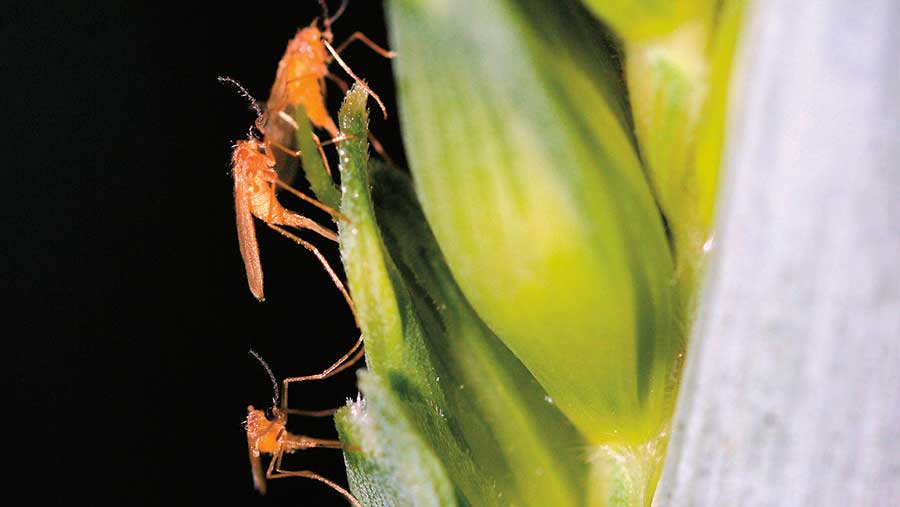 Wet weather is heightening the threat to winter wheat crops from orange wheat blossom midges over the next few weeks, a pest which can hit yields and grain quality.

Pre-flowering wheat crops in England and Wales could be at risk due to the recent rain and warm temperatures, and milling wheat should be prioritised over feed varieties for possible treatment.

David Robinson, technical expert at advisory group Frontier, says crops are vulnerable to the pest from boot splitting, when the wheat ear emerges, to the onset of flowering. Once crops have flowered the larvae don’t tend to survive.

“We are at a critical period when midges could move into crops given the current weather conditions,” he tells Farmers Weekly.

Some wheat varieties such as Skyfall, Zulu, Leeds and Kerrin are resistant the midge.

Mr Robinson says he has seen one case of these midges in a wheat crop in Lincolnshire, and with many arable areas getting 30-40mm of rain recently, crops could now be at risk.

With moist conditions and soil temperatures above 13C, larvae emerge from the ground to pupate and the resultant midges can then fly and lay eggs on the wheat ears.

Larvae from these eggs feed on the developing wheat ears, causing small shrivelled grains and damage to the outer layer of the grain, which can result in sprouting in the ear and lead to attacks of fusarium and septoria diseases.

Growers have a narrow window from ear emergence to onset of flowering to treat crops, and with chlorpyrifos (Dursban) now banned, they will largely have to rely on contact-acting pyrethroids, while the neonicotinoid thiacloprid (Biscaya) can also be used.