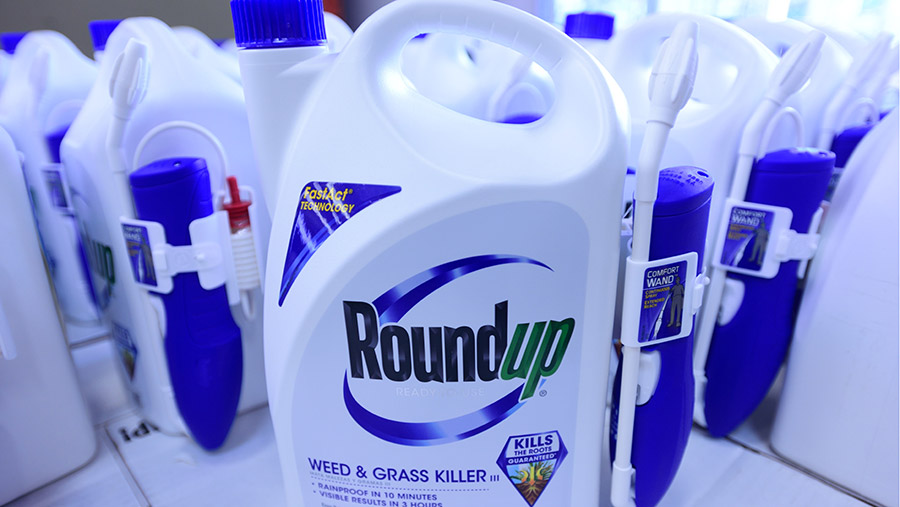 German agrichemical giant Bayer has expressed its disappointment after a US jury found that Roundup weedkiller was likely a “substantial factor” in causing a farmer’s cancer.

The case involves a Californian farmer Edwin Hardeman, who claims his exposure to the company’s herbicide caused his case of non-Hodgkin’s lymphoma.

For the first phase of the two-part trial, a jury was asked to decide if glyphosate was a “substantial factor” in causing the 70-year-old farmer’s cancer.

See also: Opinion – life without glyphosate is hard to contemplate

The unanimous decision in the US District Court, sitting in San Francisco, found that Roundup caused Mr Hardeman’s cancer after he used the product to control weeds for nearly 30 years.

Bayer’s share price dropped by 13% to €60.62 following the announcement, which wiped off some €7bn (£6bn) off the company’s market value.

The second phase of the trial, which starts on Wednesday (20 March), will determine Bayer’s liability and damages.

In a statement, Bayer, which acquired the Roundup product as part of a $63bn (£48bn) takeover last June, said it was disappointed with the jury’s initial decision.

But the company continues to believe firmly that the science, including more than 800 rigorous studies, confirms that glyphosate-based herbicides do not cause cancer.

“We are confident the evidence in phase two will show that Monsanto’s conduct has been appropriate and that the company should not be liable for Mr Hardeman’s cancer,” said the company.

The Brazilian authorities also made their assessment with glyphosate. What did they find? There is no evidence that the herbicide causes cancer… like all the agencies that have reviewed the extensive studies. https://t.co/Paf61vO2os pic.twitter.com/p5z3WGEHnD

Bayer said it had “great sympathy” for Mr Hardeman and his family, but an extensive body of science supports the conclusion that Roundup “was not the cause of his cancer”.

It added: “Bayer stands behind these products and will vigorously defend them.”

The court heard that Mr Hardeman used Roundup to kill weeds and poison oak on his 23ha farm in Santa Rosa, California, for more than 25 years between 1980 and 2012.

However, he said he sometimes felt the chemical mist blowing on to his face and skin.

In 2015, aged 66, he was diagnosed with stage 3 non-Hodgkin lymphoma cancer and has since undergone treatment.

In a statement, Mr Hardeman’s lawyers, Aimee Wagstaff and Jennifer Moore, said their client was pleased with the initial decision, adding that they would present evidence to the jury of Monsanto’s “bad conduct”.

Bayer is facing more than 11,000 similar lawsuits in the US.

The third Roundup cancer case, which is due to go to trial in Oakland on 28 March, involves a California couple, Alva and Alberta Pilliod.