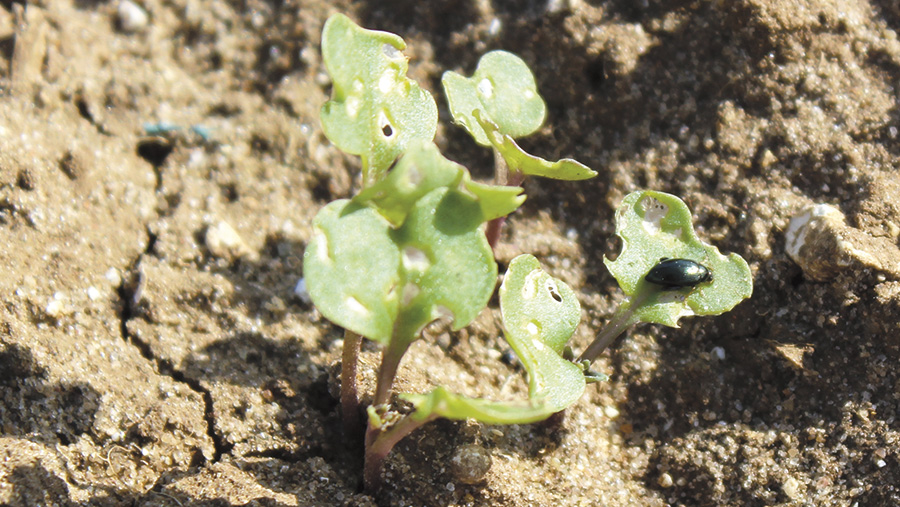 “The pace at which pesticides are being restricted is much faster than the speed at which alternatives are being developed,” says Toby Bruce, professor of entomology at Rothamsted Research, Hertfordshire. “Farmers are being caught in the middle.”

Prof Bruce’s warning comes as growers battle to establish oilseed rape crops for the third season running without access to neonicotinoids, the controversial chemical used as a seed treatment to protect plants from flea beetle attack.

His view is significant because Rothamsted is the longest running agricultural research station in the world, providing cutting-edge science and innovation to farmers for nearly 170 years.

And as an academic, science-based institution, it has no commercial axe to grind.

An EU-wide moratorium on neonicotinoid seed treatments was imposed in 2013 after some studies suggested the pesticide caused significant harm to bees.

The jury is still out – and the evidence keenly disputed – but there is little sign that neonics will be back anytime soon.

But has it refused to do so again – despite two emergency applications this year by the NFU.

The NFU says it will continue to press for the ban to be lifted.

But even a partial relaxation of the rules will come too late for planting neonic-treated rape this season. And an increasing number of growers reluctantly admit that neonicotinoid seed treatments have probably gone for good.

A review of the ban – currently being undertaken by the European Food Safety Authority – is due to report its findings by January 2017.

Taking into account any new data from studies, research and monitoring, many experts already expect that the moratorium will be maintained.

It examined the impact on populations of 62 species of wild bees across England during the period 1994-2011, which saw the widespread introduction of the pesticide.

The likelihood that the ban will remain, and the fact that using pyrethroid-based agrochemicals against flea beetle also damages bees, makes it even more pressing to develop alternatives to pesticides, says Prof Bruce.

Besides, research by his colleague Steve Foster has shown that flea beetles are becoming pyrethroid-resistant.

There is also the cost.

An interim impact assessment of the neonicotinoid ban by Newcastle University has concluded that the policy cost growers in England £22m last year in terms of additional agrochemicals, their application, replanting and lost crops.

An estimated 240,000 litres of mainly pyrethroid-based insecticide were blanket sprayed to winter rape crops to combat actual or predicted attack, suggests the study – a two-and-a-half-fold increase in the use of autumn insecticides in England to combat flea beetle.

In addition to spending £7.8m on extra agrochemicals, an estimated 17% of growers suffered crop losses due to flea beetle. The area lost is estimated at 16,000ha or 3% of the area grown.

“It is becoming increasingly clear that we won’t be going back to neonic seed treatment and alternative approaches to manage the pest are required for a resilient system and sustainable cultivation of oilseed rape,” says Prof Bruce.

It is too early to say what a post-neonicotinoid world will look like.

But Prof Bruce believes agriculture must be increasingly “knowledge intensive, rather than input intensive” – using smarter ways to combat pests while minimising the environmental impact.

As an example, he highlights the battle against orange wheat blossom midge.

This involved a four-year collaborative project to develop pheromone traps to monitor the presence of the pest and breed resistant wheat varieties.

The traps enabled growers to spray crops at the optimum time, rather than as a precaution, and gave farmers the confidence not to spray when pest levels were low.

By the time the main insecticide chlorpyrifos (Dursban) was restricted earlier this year, seed breeders had been able to breed wheat varieties resistant to orange wheat blossom midge, so the pest is now much less of a problem than it once was.

The challenge for oilseed rape growers, says Prof Bruce, is that neonicotinoids have been withdrawn before scientists have been able to develop an alternative method of controlling flea beetle.

For the time being at least, that means farmers are at the mercy of the pest.

There is little doubt that growers need a solution – and fast. Croprotect, a network of 1,000 growers and agronomists brought together by Rothamsted, suggests cabbage stem flea beetle is the fourth biggest issue facing arable farmers – behind blackgrass, field slugs and cereal aphids.

But researchers such as Prof Bruce are finding it difficult to get funding for research into alternatives to pesticides.

Despite support from some of the biggest names in agriculture, one of his major research proposals was rejected earlier this year as being, among other reasons, too narrow in its focus for the funding available.

Submitted to the Biotechnology and Biological Sciences Research Council, the proposal was to investigate “alternative crop protection strategies in a post-neonicotinoid environment”.

It was supported by the NFU, Agrii, Velcourt and Farmcare – as well as by farmers.

Alternatives to the blanket use of seed treatments or spraying of crops could include so-called “lure and kill” techniques, where pests are lured to a single place before being destroyed.

This reduces pesticide use and is already being researched with promising results for peas and beans.

Prof Bruce is taking the funding rejection on the chin.

Sometimes projects are funded, sometimes not, he says.

The BBSRC is generous when it comes to support for agricultural research, he adds, and the main sponsor of Rothamsted.

“To be fair to the sponsor, it is a very tough call to decide which proposals to fund,” he says.

“They get a lot of applications and some are incredibly high quality because the UK has some of the very best universities in the world and they are competing for the same pot of money.

“I don’t think it would be realistic to expect every proposal to get funded.”

That might be so. But it isn’t just farmers who want researchers to investigate new ways of tackling cabbage stem flea beetle.

Meanwhile, seed breeders are taking up the baton.

The first new oilseed rape varieties resulting from DSV’s new Post-Neonicotinoid breeding programme were among the main features of the company’s stand at this summer’s Cereals event.

Why we need research into alternatives to pesticides

We no longer have confidence in being able to establish rape in large areas of the country.

With no other crops providing such an early harvest and an increasing demand for the oil, it would be unfortunate if we could no longer grow it.

Most pests and diseases in crops are controlled with cultural, or physical, methods and the scale of the problem demonstrates the urgent need for innovative research to develop long-term and practical solutions in a commercial context.

Crop protection is an increasingly difficult challenge for growers due to restrictions on pesticide availability.

Farmers have been caught in the middle – after restriction of pesticide choices, but before implementation of alternatives.

The correct response to the withdrawal of these chemicals is to promote existing best practice of agronomic methods and non-chemical methods of pest control and increased R&D into improving them and developing new ones.