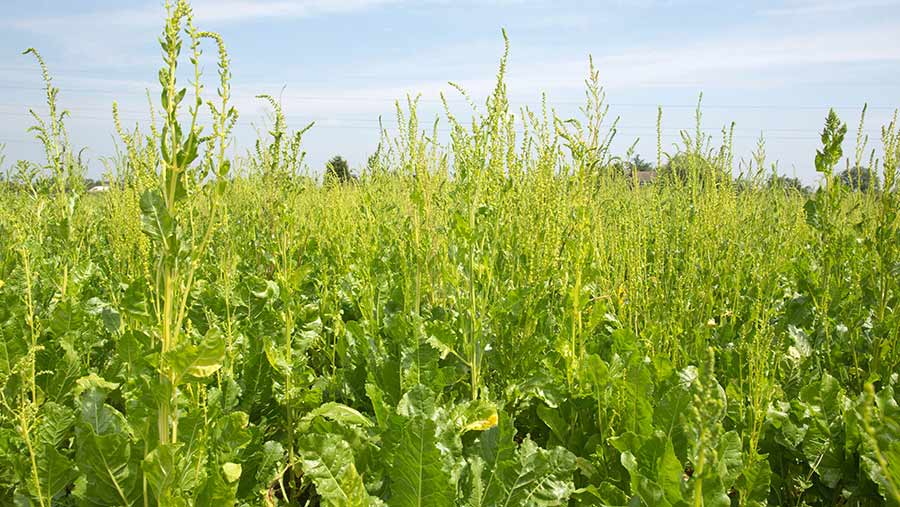 A new generation of herbicide-tolerant sugar beet varieties promises to slash the number of sprays needed, while also allowing growers to bring weed beet-infested fields back into the rotation.

However, new herbicide-tolerant varieties will enable growers to cut back to one spray and still achieve good control of problem weeds including weed beet, fat hen and annual mercury.

Available for the first time next spring, the system consists of two key parts: Conviso Smart varieties developed by plant breeder KWS and the new Conviso One herbicide from Bayer.

Smart Janninka is the first Conviso variety to make it on to the British Beet Research Organisation Recommended List, with an adjusted yield of 90% of the control. This yield is when grown using conventional herbicides.

However, growing it with the dedicated herbicide results in an additional 5% yield, says Ben Bishop, KWS sugar beet UK country manager. That’s because there isn’t the growth check seen with conventional herbicide programmes.

“Effectively yielding at over 95% of control, Smart Janninka is close to the performance achieved by some of the established varieties on the 2020 Recommended List,” says Mr Bishop.

The two actives in the herbicide, foramsulfuron and thiencarbazone, are both already approved within the EU and the product is licensed for a single application of 1 litre/ha.

While both are acetolactate synthase (ALS) inhibitor herbicides, foramsulfuron is contact acting, whereas thiencarbazone works both via the leaf and soil, with lasting residual effects.

“It can be used as part of a herbicide schedule sequenced with other non-ALS herbicides in a typical programme,” says Edward Hagues, Bayer campaign manager for root crops.

“Products such as Centurion Max (clethodim) can also be used alongside Conviso One on different spray applications to target bad grassweed problems such as blackgrass.”

However, he stresses that Conviso One is aimed to be used typically as a single application, and should only be used with Conviso Smart varieties, as conventional varieties will almost certainly die if sprayed with the chemical.

Mr Hagues says the herbicide has good efficacy on target weeds and while it is targeted mostly at broad-leaved weeds, it will also control a number of grassweeds.

Trials conducted at 53 sites across Europe compared a standard programme comprising three applications of Betanal maxxPro (desmedipham) + Goltix (metamitron) with a single application of Conviso One.

The system proved effective at controlling the majority of weeds compared with the standard programme, with greater effectiveness on fool’s parsley, cleavers and annual mercury, he says.

However, he adds that the only weed it couldn’t match for control was common field speedwell.

The system is also effective on weed beet, making it an appealing option for growers looking to bring fields with a known weed beet problem back into production.

However, he stresses that bolter management is crucial to manage resistance and stop volunteers reducing the efficacy of the chemical.

“Application timings are focused on the growth stage of fat hen, which should be around two to four true leaves, as opposed to critical crop timings,” explains Mr Hagues.

“The residual effects of the chemical in the soil should be sufficient to take out any later-germinating weeds, this puts the crop around growth stage 14-18.”

Usually, this is around the second application in a conventional herbicide programme.

However, one thing to note with the herbicide is that growers must ensure that a larger-than-normal buffer zone of 10m is left around any water course.

The new beet variety has been developed from a naturally occurring variation that was seen in one plant across 1.5 billion, explains Ben Bishop, KWS sugar beet UK country manager.

This one plant had a slightly differently shaped acetolactate synthase (ALS) enzyme, which is involved in the creation of the essential amino acids, which the beet plant needs to produce to grow.

ALS inhibitor herbicides work by binding to the enzyme and preventing it from working, but the new herbicide is unable to bind with Conviso Smart sugar beet’s enzyme. This leaves it untouched while killing surrounding weeds.

In another big change for beet growers, seed will be sold through merchants rather than by British Sugar, as the seed and herbicide must be bought together.

Both companies hope this tie-up will limit mistakes and also keep the resistance to the new herbicide at manageable levels.

To also minimise mistakes, farmers are being advised to grow whole fields with Conviso beet rather than splitting fields with the smart varieties grown next to conventional varieties.

Accurate record-keeping will be a high priority, as spraying the wrong field will be very costly.

“Flags could be produced for entrances of conventional and Conviso fields to indicate the right crop if the sprayer driver is unsure,” says Mr Bishop.

“The seed is visually different to conventional varieties, so it will be easy for the drill operator to identify it before filling up.”

The route to market will be through four distributors, although seed availability means just Frontier and Hutchinsons will have stock for the 2020 growing season.

Agrii and Agrovista will joining the distribution in 2021.

“The reason for this approach is this companies all employ farm advisors who can help farmers use and manage the products effectively for maximum return,” says Ben Bishop of KWS.

However, when quizzed on the price differential, Mr Bishop remained tight-lipped on any cost, saying it would be “competitively priced” with a conventional system.

Interest in the Conviso system is expected to be high and KWS is preparing to have about 10,000 units available to UK growers.

Two varieties will be available in 2020 with Smart Breanna, which is on the National List, joining Smart Janninka. Smart Breanna has a yield of 90.1%.