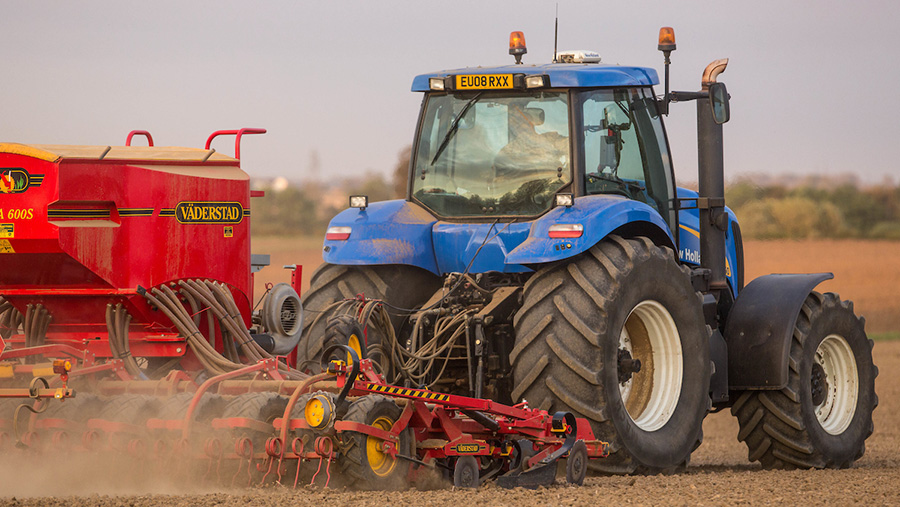 Wheat growers across southern and central England are responding to the good autumn weather by delaying drilling as long as they dare to combat blackgrass.

Many have held back longer than last autumn in a bid to beat the arable industry’s most damaging weed, and have been helped by mild and moist conditions.

These have allowed blackgrass to emerge quickly and then be killed off with glyphosate herbicide before autumn wheat drilling starts.

John Hall, a director at farming group Sentry, said good flushes of blackgrass have allowed them to hold off an extra week with autumn drilling.

“On land with a bad blackgrass problem we have only started drilling this week. It is a conscious decision helped by the season,” he told Farmers Weekly.

Areas of heavy land that the group farms in Cambridgeshire and Leicestershire have seen good flushes of blackgrass, then have been sprayed off and sown this week with a direct drill, to minimise any soil disturbance.

“This year we have certainly been helped by a good spell of weather, so we have being drilling about a week later,” he said.

On lighter land with no blackgrass burden, the group started drilling wheat on 25 September.

Eye on the weather

Cambridgeshire grower James Peck is busy drilling wheat this week after a late start, but with a watchful eye on the weather.

“We started drilling wheat on 7 October, whereas five to 10 years ago we would have been finished by 1 October,” he said.

At the start of this week he had drilled about 70% of his 600ha of wheat in near perfect conditions, and with continuing good weather he should be finished by the end of the week.

“It is a very risky strategy and we are super-anxious about the weather,” he added. Mr Peck farms about 2,400ha of land from his base at Scotland Farm, Dry Drayton, just west of Cambridge.

He said a rotation with plenty of spring cropping is key to controlling blackgrass, as bad weather can often hold up the autumn routine of spraying off the weed, drilling and applying pre-emergence herbicides.

Hold back until November

Further east in Cambridgeshire, farm manager George Palmer is leaving wheat drilling as late as early November on bad blackgrass land, and only started drilling wheat on 2 October this season.

“Any field with blackgrass we leave drilling as late as possible, usually until early November, and last year we did not see a huge yield disadvantage,” he said.

Seed rates are increased 10-15% for the late drillings and a careful watch is kept on the weather. Earlier this week, half of his 600ha of wheat had been drilled.

Mr Palmer manages 2,000ha of arable land varying from sandy loams to fenland at Northfield Farms just south-east of Ely, on the edge of the Cambridgeshire Fens.

“Having just walked the land and seen the second flush of blackgrass coming through we know it is the right thing to do,” said Mr Baylis, who is Farmers Weekly’s farm manager of the year 2017.

All fields on the 3,600ha estate are assessed for blackgrass, and last season he moved to drilling wheat on his most blackgrass-infected land from 20 October to early November.

“We have had very good blackgrass control with this approach using high seed rates and vigorous varieties such as Crispin and Santiago,” he said from his base at Hall Farm, Stainton le Vale in north Lincolnshire.