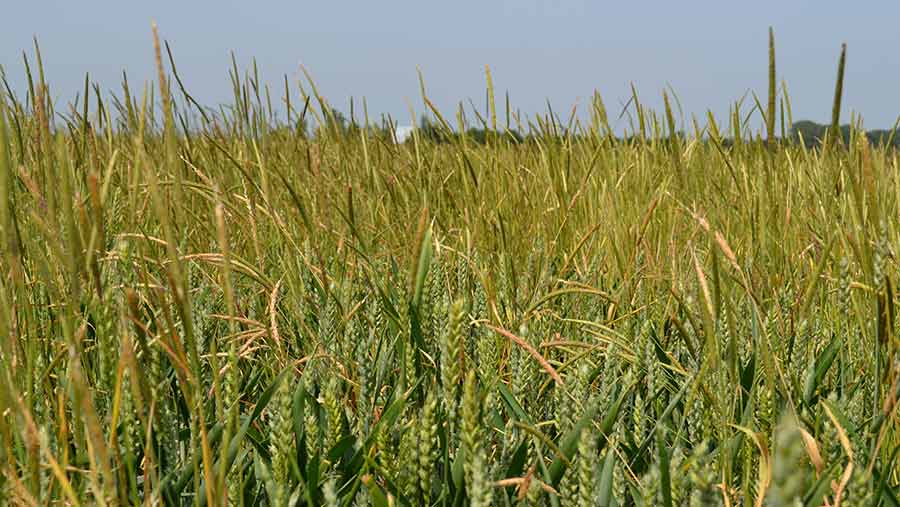 Cereals growers are being urged to redouble their efforts to control blackgrass by delaying drilling and spring cropping after an upsurge this season in levels of the pernicious grassweed.

A mild winter and a slow cool spring allowed blackgrass to thrive in uncompetitive cereal crops, and the grassweed tillered strongly to create large blackgrass plants.

John Cussans, weed specialist with crop consultants Niab, says growers have faced a frustrating season trying to control the grassweed, but they need to refocus their efforts for next season.

“Blackgrass is not a problem which emerged overnight, so we are not going to solve the problem overnight,” he tells Farmers Weekly.

As many cereal crops were slow to get going in the spring, those blackgrass plants that survived autumn herbicides regimes are now enormous and pose a big threat as seed will be shed to compete with next season’s crops.

Mapping out fields where blackgrass is bad is important and ploughing soon after harvest is an option as long as the land is not ploughed in the following years to bring blackgrass seed back to the surface, says Mr Cussans.

“If you have a bad blackgrass problem then forget using agrochemicals alone”, he says.

Delayed drilling and the use of fallow or spring cropping for at least three years should be tried, and if the spring option is chosen then growers should make sure cultivations are done in the autumn and then aim for just one pass in the spring, Mr Norman adds.

For many winter cereal growers, delayed drilling and the use of stale seed-beds with glyphosate is likely to be the main weapon to keep the weed problem under control.

Phillippa Overson, herbicide campaign manager at Bayer, says with bad blackgrass problems growers need to consider holding back drilling until the second half of October.

This will allow time for stale seed-bed techniques to be used while pre-emergence herbicides show better efficacy when there is more moisture in the soil.

“The latter half of October is the peak time for pre-emergence herbicides to work well,” she says.

Pre-emergence herbicide mixtures should be based on a core of diflufenican and flufenacet, and then growers can add the likes of prosulfocarb and other actives to bolster control levels.

Good pre-emergence treatment can control only about 80% of blackgrass populations, so everything must be done to boost this efficacy by creating fine seed-bed and waiting for more soil moisture by drilling later.

Growers should also look to address soil structure and drainage, and one method could be to try cover crops over the autumn and winter.

“Cover crops can help drainage and so aid spring drilling by creating a drier soil,” he says.

Niab’s Mr Cussans emphasises the need to pick the right spring crop, with spring barley being the most competitive option. He advises to avoid beans and linseed as there is limited effective herbicide control for those crops.

He stresses that if growers do chose spring cropping, then all major soil movements should be done in the autumn and the very minimal done in the spring and so as not disturb blackgrass seed and encourage it to germinate.

Bayer’s Ms Overson agrees that barley is the best choice for a competitive spring crop but also suggests growers could consider maize as this crop can be drilled later and different herbicide chemistry can be used.