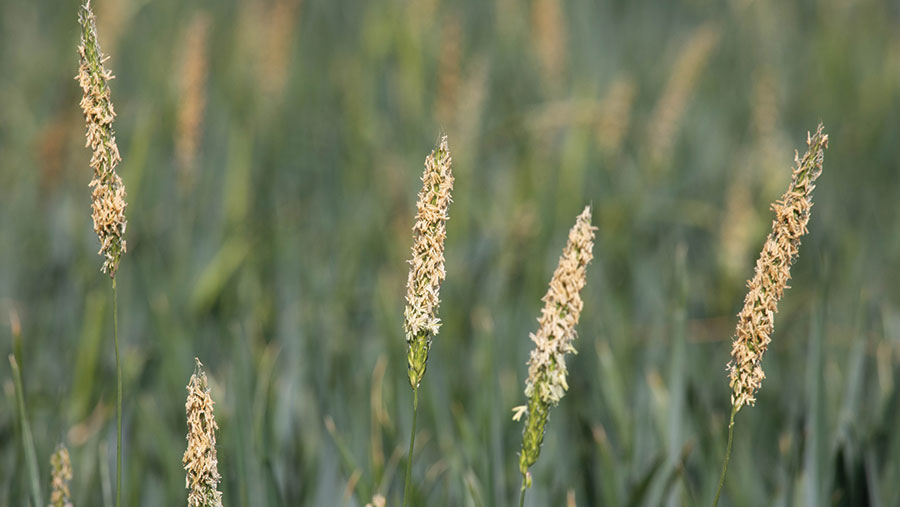 Sampling and testing blackgrass for herbicide resistance can play a vital role in controlling populations of the annual weed, by providing growers with knowledge of the potential level of control from the different chemical options.

Tests can help monitor resistance development, so growers know what they are dealing with, allowing them to determine optimum herbicide programmes that reduce costs on potentially wasteful herbicide applications.

See also: What do your blackgrass resistance test results mean?

However, if populations do take hold, it is vital to focus on controlling its spread, using all available tools in the rotation, which includes resistance testing.

“Do not underestimate the importance of testing for resistance. It is well worth farmers’ time, so they know what they are dealing with and what level of control they can expect from the application of herbicides, as not all blackgrass plants are resistant to all actives,” she says.

Dr Cook explains how a simple, yet comprehensive sampling system is required when collecting blackgrass seeds for testing, as the resistance tests are only as effective as the samples taken.

She first highlights that careful consideration must be given to the sampling of seeds, to ensure they are collected at the optimum stage of ripening so they can deliver an accurate test.

Blackgrass seed is ready for sampling when the seeds are brown/beige in colour and are falling from the top of the head downwards.

“The optimum time to take samples is between 25% and 50% seed shed, which occurs during July and early August,” she says.

She says seeds are only viable for testing when they become ripe, and this takes place once the head finishes flowering, where it loses all of its anthers and turns green.

“A lot of people seem to think that when it is flowering, it is shedding its seeds, but actually these are the anthers, not seeds, which are a bronze-yellow colour and sit on the outside of the plant,” she adds.

When collecting seeds, it is essential to take a representative sample from across the whole field. The larger the area sampled, the more reliable the test.

Samples should be collected across two or three tramlines, covering an area of 100m, and not from the edge of the field.

To remove the seeds, the blackgrass head should be gently rubbed. Samplers must ensure only seeds are collected and not intact heads, which are unlikely to be ripe.

Enough seed should be collected to fill a mug. They should then be dried in a container for a few days before dispatching in a paper envelope to be tested.

Sarah Cook was speaking at a recent BASF press briefing.