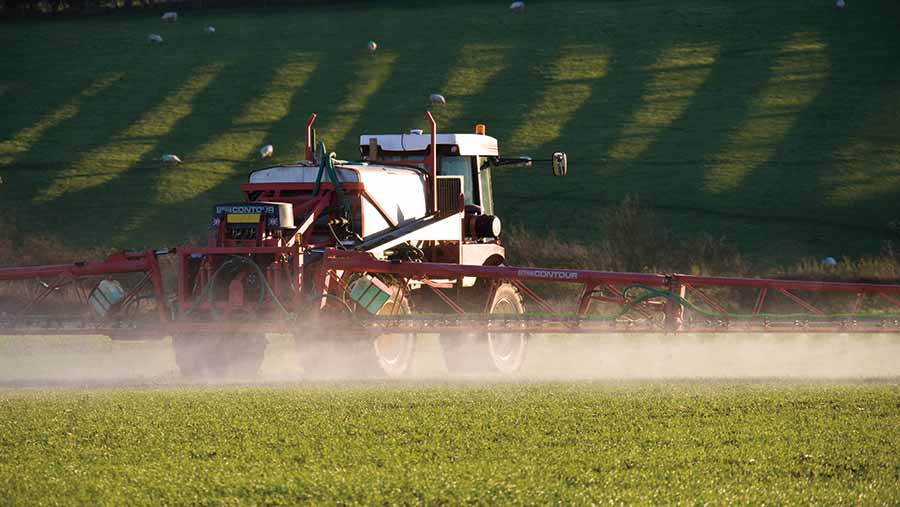 Two new post-emergence autumn herbicides have been launched this autumn, offering growers a means of improving blackgrass control over the existing standards.

They offer some much-needed additional control of blackgrass when used according to advice, but before getting carried away thinking this will solve your blackgrass problem, it is worth noting that the products are based on existing, rather than new, chemistry.

See also: Farmer burns blackgrass after ‘all other options exhausted’

In addition, the newcomers will need to be part of a complete control programme consisting of both cultural and chemical methods.

The first of these, UPL’s Xerton, contains ethofumesate – an active well known to sugar beet growers. As such, it belongs to the benzofuran chemical family and its mode of action is similar to that of Avadex, which works by preventing lipid synthesis rather than acetyl CoA carboxylase (ACCase) inhibition.

Most importantly, there has been no recorded resistance to ethofumesate in the UK, despite its use in sugar beet for a number of years.

Xerton’s approval for use in winter wheat is good news for a number of reasons, believes Chris Martin of Agrovista, who points out that it has to be used at the early post-emergence stage – but before blackgrass plants emerge.

“The excitement about Xerton is due to its blackgrass activity,” he acknowledges. “But it’s also very strong on annual meadowgrass and chickweed, so it is a good fit at the old isoproturon [IPU] timing and will be a very useful tool for controlling these weeds too.”

As the active ingredient was previously used as a grassland herbicide, it won’t do ryegrass, he stresses. “But you can expect activity on the other grassweeds – brome, blackgrass and meadowgrass.”

Where a blackgrass boost is required, Mr Martin suggests adding some flufenacet to Xerton and applying it when the wheat crop is at the two- to three-leaf stage.

“For best blackgrass results, it should follow a flufenacet-based pre-emergence treatment,” he says.

“If 240g/ha of flufenacet is used in the first application, then you can still add a further 120g/ha to 0.6 litres/ha of Xerton in the early post-emergence spray.”

This mix has worked very well in five years of trials, he says. “It has given an extra 10-15% control, depending on the tank-mix partner and conditions at spraying. We find that it should be used with the proven residual adjuvant Remix for optimum performance.”

There is scope to use Avadex in the programme as well, although it has to be applied pre-emergence, he says.

“With difficult blackgrass, you may well need all three of these applications.”

“There are some farm situations where the blackgrass population has acetolactate synthase (ALS) target-site resistance and Atlantis is ineffective. These are the prime candidates for an alternative strategy and Xerton could help.”

Xerton’s price tag is fairly modest when compared with other residuals. It costs approximately £16-£17/ha for a 0.6 litre/ha treatment, delivering 417g/litre of ethofumesate.

Looking ahead, Mr Martin hopes a pre-emergence registration for Xerton will be forthcoming, as well as approval for use on other crops, including barley.

The second new herbicide, Hamlet from Bayer CropScience, is an Atlantis-plus product, having had diflufenican included with the mesosulfuron + iodosulfuron components found in Atlantis, but in a new liquid formulation.

It can be used to give an additional 5-10% control of susceptible blackgrass, claims the company, providing it is applied early when the weed is at the one- to three-leaf stage and before it starts to tiller.

Given this recommended timing, growers should include a residual partner with Hamlet, advises Gordon Anderson-Taylor of Bayer, so that any weeds that emerge subsequently are also controlled.

“There are options for this – such as flufenacet, prosulfocarb and pendimethalin,” he says.

“The key point is that Hamlet is an autumn product, so don’t think you can wait until the spring before you apply it.”

Having said that, Dr Anderson-Taylor acknowledges that with later drilling dates, there may be some requirement for patience

“Focus on the blackgrass stage. It’s about hitting it at one to three leaves, rather than meeting a date.”

As Hamlet is based on the same actives as Atlantis, blackgrass with ALS target-site resistance will not be controlled.

Dr Anderson-Taylor sounds a note of caution where Liberator – which also contains diflufenican – has been used beforehand, as a single application of Hamlet delivers another 75g/ha of diflufenican.

“You must think about your total application of diflufenican in the programme if you intend to follow with oilseed rape or sugar beet.

“If that’s the case, ploughing or cultivation to 15cm will be required.”