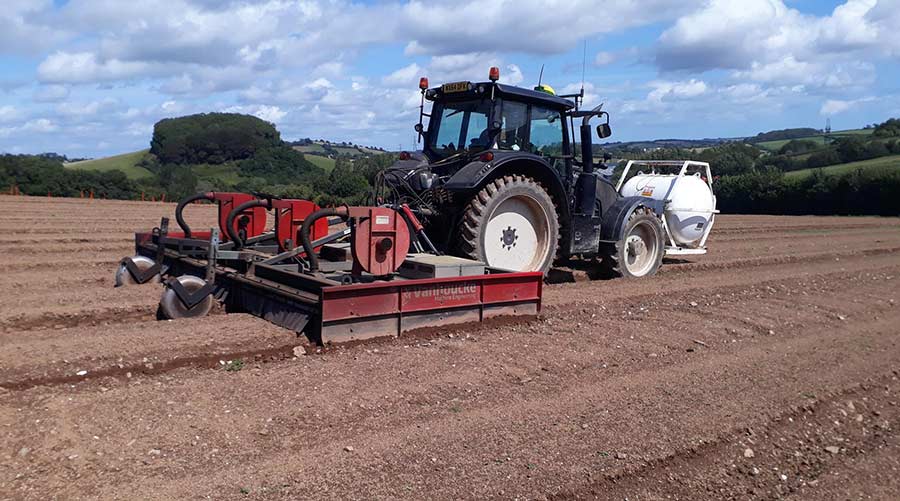 A well-known vegetable grower in the south-west of England regularly uses a flame weeding machine to achieve a stale seed-bed before drilling expensive organic crops.

Riverford Organic Farmers’ farm manager Alex Stephens uses the technique as part his seed-bed preparation for crops of baby leaf salads and spinach, although he says it can also provide desiccation for potatoes and pre-emergence weed control on carrots and parsnips.

The company is based in Totnes, south Devon and employs a local contractor that runs the three-bed Vanouche machine. Average output is about 0.5ha/hour, however the small fields on the farm reduce this work rate.

The machine has a 5.4m working width and uses a front-mounted propane tank, which has enough gas to cover around 5ha before refilling. It’s not a cheap process and so is only cost effective for organic producers at the moment, with £350-450/ha the ballpark figures.

It requires around 120hp on the front with working speeds around 2.8kph, although this is dependent on the weed density in the beds.

Not all weeds are controlled so timeliness is key. Anything over four true leaves will usually be able to withstand the flame, anything under this size will be controlled. Soil temperature is only increased at surface level so there is no damage or lasting effects to bugs and microbial activity below.