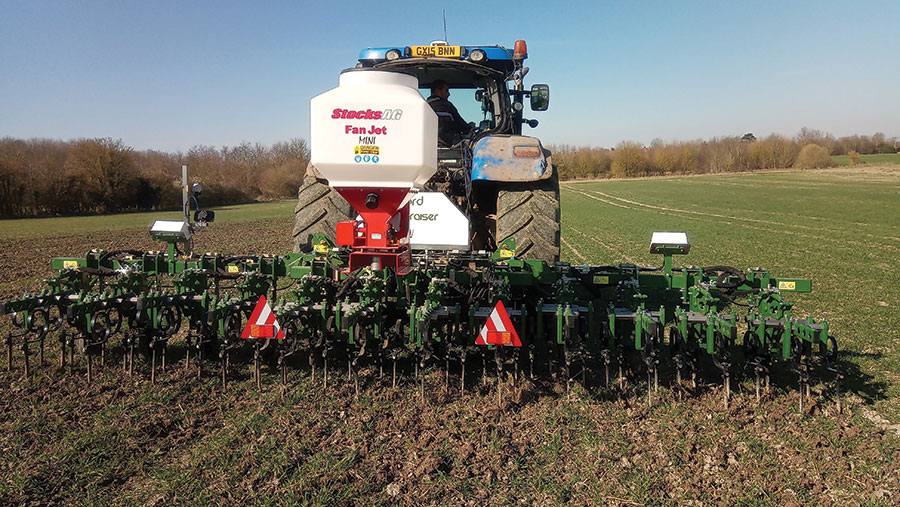 Precision-guided hoeing is being put through its paces on a Hertfordshire farm in an effort to improve blackgrass control in winter wheat and minimise the need for a spring-applied herbicide.

A spend of up to £60/ha on post-emergence grassweed chemistry across 620ha of combinable cropping prompted Jo Franklin to look at alternative weed control methods, with the aim of reducing the use of herbicides that have little efficacy on resistant blackgrass.

One of the first to use the Garford Robocrop Guided Hoe on narrow 12.5cm rows in a conventional farm setting, she admits that getting the 6m hoe set up right as it moves around the farm is proving to be a challenge in such a busy spring.

“Some of our autumn-drilled wheat is already as forward as it can be for the technique to work,” she told Farmers Weekly in late March.

“You have to be able to still see the row – once the crop is at canopy close, it’s too late.”

For this reason, winter wheat drilled by Baldock-based Kaiapoi Farming towards the end of January proved to be an easier test site, with the hoe working well.

“The crop was still small and weed numbers were low. In those fields, one pass with the hoe will take us right through to harvest.”

Her plan is to use the implement where conditions are right, as soil moisture is critical to its success.

If it’s too wet, the hoe tends to pull up a clod with the weed still attached, rather than pulling the blackgrass plant out cleanly.

Having a seeder fitted to the guided hoe will allow Jo Franklin to try putting clover into her spring barley crop as she goes through it for weed control purposes.

Her intention is to travel as late as is possible with the hoe – up to growth stage 31-32 in the spring barley crop – as there is a narrow window for getting clover to establish successfully.

If it works, a clover understorey will then develop in the barley, so that the farm’s sheep can graze it after harvest.

“It was never my intention to hoe the whole farm and we will be sticking with our pre-emergence herbicide programme for the foreseeable future,” she reveals.

“Although it’s theoretically possible to use the hoe in the autumn, our plan is to go through October-drilled wheat in early March.”

A concerted, integrated effort for the past few years has seen blackgrass numbers fall across most of the farm, but in the worst patches there can still be 500 heads/sq m.

“We haven’t got post-emergence chemistry that works in the spring.

“Any blackgrass that gets left behind by the autumn programme is an issue.”

Early learnings with the hoe are that it needs patience and a real desire to get it right, she adds.

“Getting it set up correctly is really important. It has to be accurately aligned with the drill coulters and, once in operation, you must follow the exact direction of drilling.”

Operator attitude is essential, as is training, believes Ms Franklin.

“It hasn’t been all plain sailing, and the coronavirus lockdown restrictions have made it more painful. Next year will be different.”

As one of the Agri-EPI satellite farms, she received help with the initial purchase cost of the machine of about £50,000.

Each unit has to be made according to the farm’s row spacings, which is why they have been more widely used in crops planted with precision drills to date.

Getting it to work in narrow row cereals is more challenging.

Cameras mounted to the hoe capture images of the crop ahead of the tool bar, with the position of the rows guiding the hoeing tools so that weeds can be removed.

For such accuracy, however, the tractor needs to be almost following the exact path of the drill, to enable the cameras to take out the final few millimetres.

“To get this accuracy, we teamed up with Trimble using a centre point RTK [real-time kinematic] signal and self-steering GFX 750 system to ensure pass to pass repeatability,” she says.

“We were able to record the drill passes and then, several months later, follow the exact same pass with the hoe with less than 2cm difference.”

Agri-EPI was established by the government as part of its Agri-Tech strategy, to focus on precision agriculture and engineering.

The satellite farms are a network of commercial farming operations that act as a test bed for research and development, helping scientists and engineers with new ideas.