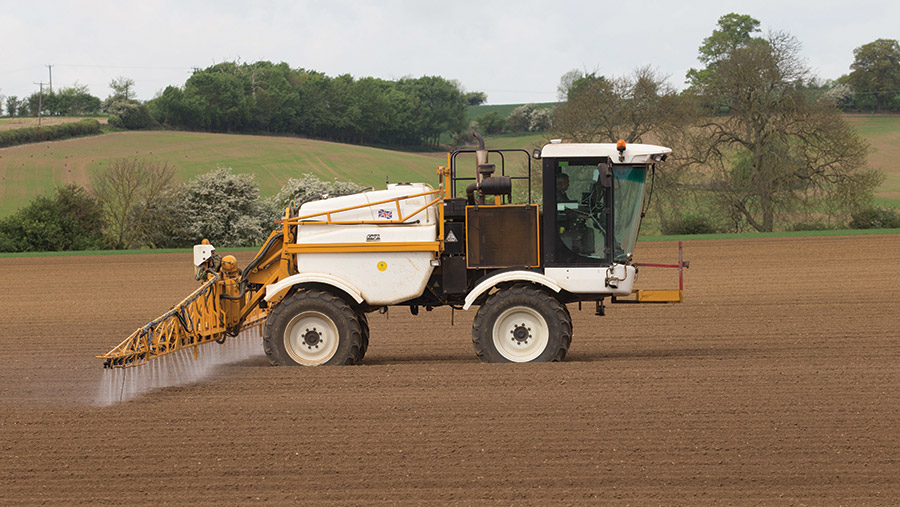 There will be no room for complacency in potato weed control strategies this spring, as growers embark on their first season without broad-spectrum contact herbicide diquat.

Up to now, weed control was pretty simple – many would plant, wait until weeds emerge and sometimes up to 40% of the crop, then apply a residual plus diquat mix.

This approach provided adequate control of larger weeds, resulted in relatively little crop damage and all with minimal management input, because growers always had time on their side.

However, with diquat’s revocation, this “casual” approach is no longer viable with alternative products, according to East Anglian independent potato specialist Andy Alexander.

See also: Is regenerative agriculture the future of arable farming?

PPO inhibitors Shark and Gozai are likely to check crops more significantly than diquat when applied to emerging shoots, with both labels advising against application beyond 5% emergence for earlies and 10% emergence for main crop varieties.

It should be noted that Gozai has a total maximum dose of 1.6-litres/ha and any proportion of that used early season reduces product available for haulm destruction later in the season.

Mr Alexander says he will be using Gozai as a direct replacement for diquat, combining it with his residual herbicide mix in one hit as before.

However, he warns growers that any application containing a PPO inhibitor such as Gozai should be applied at a true pre-emergence timing, before any sign of the crop breaking through the ridge is seen.

“It will require visual inspection of the crop on a regular basis, keeping an eye on the weather forecast and capitalising on any application window. The last thing you want to do is check the crop.”

This is a sentiment shared by Scottish Agronomy’s Eric Anderson, who says waiting until any plants are lifting soil on top of the ridge would be very risky at a time of year when wind and rain regularly stops sprayers for 24-48 hours or more.

“Shark is going to be the product of choice for us and it’ll have to be applied much earlier than we’d have previously gone in with diquat,” he adds.

In addition to crop safety considerations, Mr Anderson says that the PPO inhibitors are also less able to tackle large weeds and do have some gaps in the spectrum of weeds they control.

In a slightly different approach to Mr Alexander, Mr Anderson will apply residual chemistry seven to 10 days after planting once ridges have settled, suppressing any weeds that germinate between planting and crop emergence.

He will then monitor fields and apply Shark pre-emergence of the crop to tidy up any small remaining weeds.

“PPOs aren’t going to control annual meadow grass above two leaves and, in particular, Shark isn’t strong on mayweed, so if you wait until potatoes are coming through before applying anything, your weeds will be too large to kill.

“You’re going to have to think about putting on your residual first, then sequencing your contact spray pre-emergence,” explains Mr Anderson.

There has also been discussion about the possibility of adding in glyphosate to any herbicide mix applied pre-emergence of the crop to enhance control of emerged weeds.

This should be avoided at all costs on seed crops, where even the slightest translocation of the active ingredient into potato plants can be problematic for seed viability, says Mr Anderson.

“However, on ware crops, it could be viable and should be deployed on a case-by-case basis after discussion with the grower.

“Any application should take before shoots are 2in from top of the ridge.”

Residual options need to be tailored to weed spectrum where field history is known, with metribuzin products such as Shotput and Sencorex Flo likely to form the backbone of many programmes where variety allows.

All tank-mix partners control a range of weeds, but have strengths.

Gamit is strong on cleavers, Defy is strong where fumitory is a concern, Praxim majors on knotgrass and bindweed, and Artist gives additional residual control of annual meadowgrass.

New product Emerger will also be in its first full season of sales and is strong on fat hen and mayweeds.

Scottish Agronomy trials have shown good activity on fumitory and it performs well under dry conditions.

Mr Anderson adds that where variety doesn’t permit metribuzin use, mixtures of Defy with Praxim, Emerger or pendimethalin products such as Stomp Aqua are available, but Defy and Stomp Aqua, in particular, are not as effective in dry conditions.

“You’ve got to manage expectations in those situations and accept you aren’t going to get optimal weed control. It might be about cold steel [re-ridging] instead.”