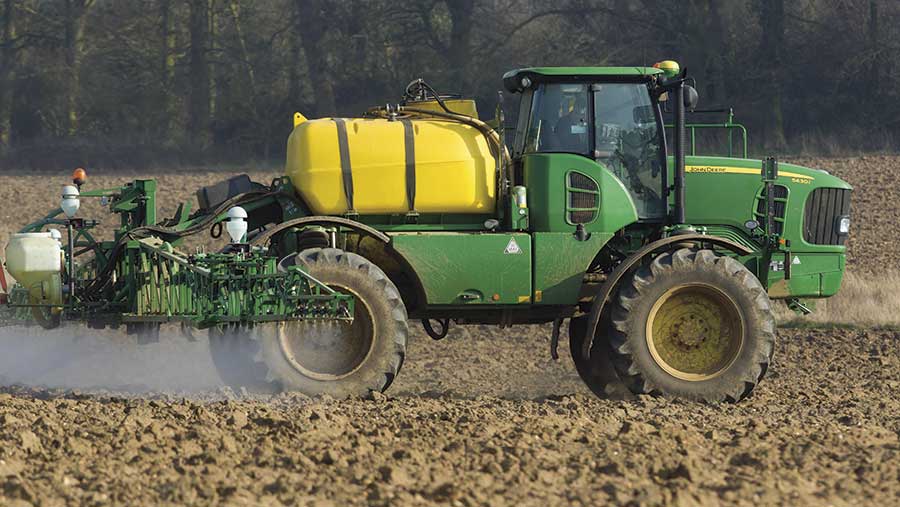 Shallow ploughing, the use of a roller crimper and a reliance on frosty weather may be needed for minimal tillage to succeed without the use of under-threat herbicide glyphosate.

Three arable growers are looking to develop different strategies to kill off cover crops or grass leys before drilling their next crops when using reduced or zero cultivations without the popular weedkiller.

Burying the cover crop, rolling and breaking its stems or relying on cold weather were all methods under close investigation to cut the industry’s over-reliance on glyphosate.

The agrochemical is the world’s most widely used herbicide, but it is under regulatory threat as some studies have linked it to cancer, while glyphosate resistance has been detected in some areas.

“We can’t keep deep-ploughing, while Roundup (glyphosate) is overused,” he tells Farmers Weekly.

Mr Wilkinson bought Honeydale Farm in the Cotswolds in 2013. It had been cropped continuously with spring barley, and he soon switched to four-year grass leys grazed by sheep followed by four years of spring cereals to improve soil fertility.

The key to his system is deep-rooting fertility-building leys, and he uses shallow ploughing to destroy this grassland and deal with difficult-to-control perennial weeds such as sow thistles on his Oxfordshire farm near Shipton-under-Wychwood.

Because of the economic pressures facing the arable industry from low grain prices and rising input costs, the seed merchant and farmer says he is looking to work without herbicides while building up soil fertility.

Fellow Oxfordshire farmer Andrew Woof prefers using a machine with multiple roller crimpers to roll and then break the stems of his cover crops on his 200ha organic Weston Farm, near Buscot, about 15 miles south of Mr Wilkinson’s farm.

“We are using cover crops to suppress weeds and then the roller crimper is used to kill them off,” Mr Woof says.

He began to use his roller crimper for the first time this season to improve the biological activity of his soils and help the economics of his grass and arable cropping farm.

In Kent, no-tillage advocate Andrew Howard is looking to cut his reliance on glyphosate on his 350ha arable Brockhanger Farms near Ashford as he aims to reduce his overall herbicide costs.

He is keen to use cover crops at a seed cost of less than £25/ha to improve his soil structure after moving away from ploughing, which can cost as much as £50-60/ha.

A forage pea and mustard mix was tried last summer as a cover crop, but a dry autumn meant there was poor establishment, so he could not test whether frosty weather would have killed off the crop over the winter.

He is using glyphosate as a key tool in his move to no-till, made six years ago, but is concerned at the crucial role this threatened herbicide plays in his system.

“Organic no-till is difficult without guaranteed frosts. The forage peas and mustard would have worked if we had got rain and seen good establishment as frosts would have killed off the crop,” he says.

The three growers were speaking to Farmers Weekly after speaking at the Real Oxford Farming Conference, which focuses on environmentally friendly, sustainable farming.