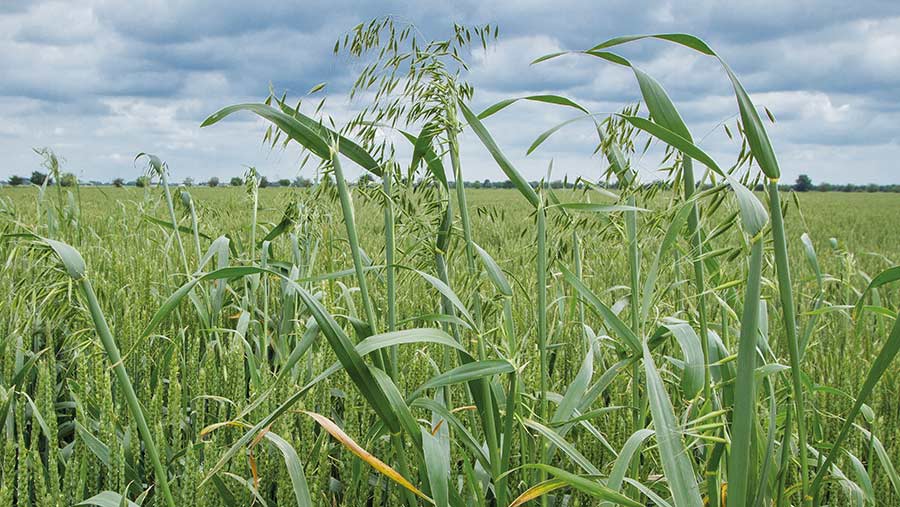 Radical effects on weed populations and their management are seen in low-disturbance and no-till systems, reflecting that they involve far more than just changing the drill.

Niab weed expert John Cussans says there are both weed challenges and opportunities from minimising soil movement, and believes growers should consider five key factors if they want to optimise weed management in a no-till regime.

See also: Why regen farmer opted for a rotation with no break crops

Herbicide active ingredients have a wide range of observed half-life values in the field, with a chemical such as diflufenican ranging from 80 days right up to nearly 600 days.

“The half-life of an active ingredient is the length of time it takes for half of it to break down. You see the upper end of these values in a no-till system, as cultivations have a role in this process,” he explains.

That has implications for application rate and weed sensitivity, with both being more significant in a no-till system.

Crop residues can also be important – where large quantities of chopped straw are left unincorporated after harvest, and pre-emergence herbicides are applied onto the mat of straw, some proportion of the herbicide will be intercepted, reducing its effectiveness.

“However, there is more to it than that, because the presence of residues suppresses weed germination, so you tend to be managing fewer weeds.”

That mulch effect can be significant, he adds. “In one recent study, the net effect of decreasing weed abundance and herbicide efficacy is that overall you see a reduced level of blackgrass at the end of the season.

“Potentially, we can reduce reliance on herbicides as part of Conservation Agriculture, but alongside that it’s really important not to over-focus on the immediate efficacy of the herbicide. So many other variables are changing at the same time.”

No-till systems make a radical change to the vertical structure of the seed bank, with an accumulation of weed seed density occurring in the top 5cm layer of soil.

Fresh weed seeds are concentrated at 0-5cm and not mixed as much with older seeds deeper in the soil profile, increasing the size of the pool, but decreasing the fraction of the weed population recruited.

“At the same time, the proportion of the shallow seed bank that germinates is lower in the absence of cultivations.”

On its own, this reduction in germination is not enough to contribute to weed management, he points out. “But, if you also start to change the rotation at the same time and bring in more spring crops, for example, you do see large potential effects through the rotation.”

For this reason, growers shouldn’t rely on it unless it is part of a systems change that reduces seed return in a rotation, he adds.

Moving to a low-disturbance system changes the relationship between the size of the seed bank and the resulting weed seedling density, as well as putting greater focus on the fate of weed seeds left on the soil surface.

With this in mind, growers should look again at what they do to get weeds to germinate after harvest and reconsider the use of stale seed-beds, advises Mr Cussans.

The old wisdom that the more you get to germinate, the less you will have later is not borne out by the data, he reveals.

“The flaw is that it didn’t appreciate the dynamics in a no-till system,” he says.

Where soil is left undisturbed, there is mortality occurring in weed seeds left on the soil surface. “Danish work shows increased survivor levels by slightly burying them.”

The weather also has a role, accepts Mr Cussans. “In wet conditions, cultivations can be an effective way to encourage germination. In dry seasons, it’s better to leave them on the surface.”

In most farm situations, weed communities are dominated by a few species, although one study showed there are 16-25 different species on typical arable farms.

While dominance by species such as blackgrass does lead to a less-diverse weed community, it hasn’t caused species loss – just a reduction in their abundance, says Mr Cussans.

Making a fundamental change to a farming system will alter the nature of the weed community, he points out, with some questioning whether no-till encourages a wider range of weeds.

“Minimising soil movement, having a greater diversity of cropping and maintaining ground cover – the main principles of regenerative agriculture – are all going to have an effect in their own right.”

It’s worth monitoring any changes, he suggests. “Weed community diversity could become a good metric for these systems.”

The continuing development of herbicide resistance among weed populations is already causing grassweeds such as Italian ryegrass, brome species, wild oats and blackgrass to be more difficult to control.

While these remain challenging, particular threats emerging in reduced-cultivation systems include bur chervil and rat’s tail fescue, both of which are proving to be highly invasive in no-till situations, says Mr Cussans.

“We are also seeing the first signs of invasive and parasitic species coming in – most likely as contaminants in cover crop seed mixes being imported due to failures in biosecurity.

“It’s a concern because there are no effective herbicides for parasitic weeds. This unintentional importing of weed seeds needs vigilance and monitoring if systems relying on non-crop species for fertility building, as with catch/cover/companion crops and environmental scheme mixes, are to be truly sustainable.”

Cambridgeshire no-till farmer David White agrees that the weed challenges change with the cultivations system used – some are easier to manage while others become more difficult.

A trial of strip-till in sugar beet at Hawk Mill Farm showed that late-germinating weeds such as knotgrass and fat hen that were difficult to control previously did not appear in the same numbers as they did when the seed-bed was cultivated.

The same is true for cereals established by no-till. 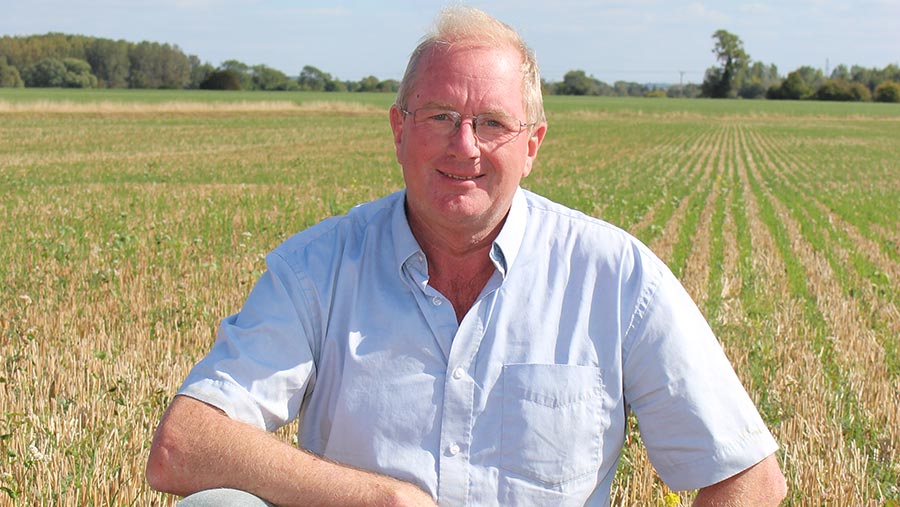 “I’ve noticed that leaving weeds seeds on the surface has made them easier to manage than when they were incorporated,” he reports.

Some grassweeds have become more prevalent, but being aware of this risk and practising good headland management has helped, he says.

“Grassweeds can be kept under control when you have a diverse rotation and can make use of a wide range of herbicides.”

John Cussans was speaking at a recent webinar organised by Base-UK for its farmer members.

Both bur chervil and rat’s tail fescue are becoming more problematic in reduced cultivation systems. Here is an overview of both weeds. 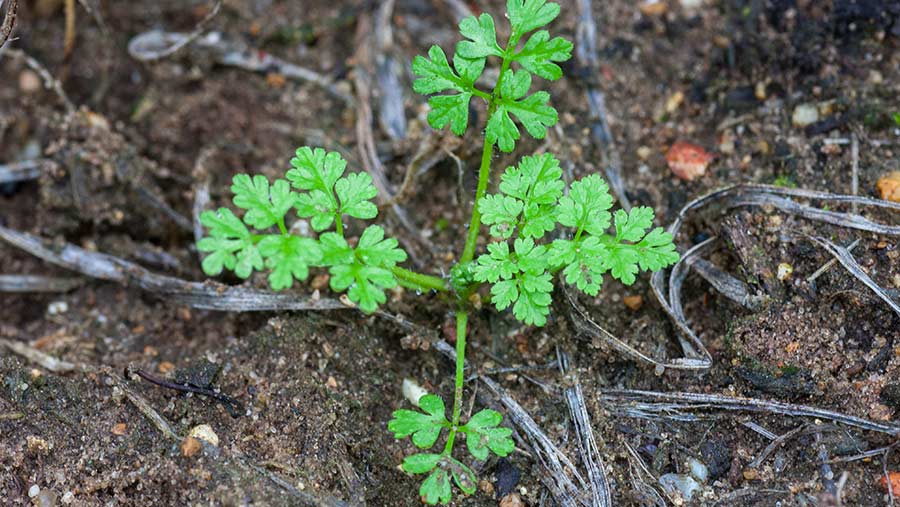 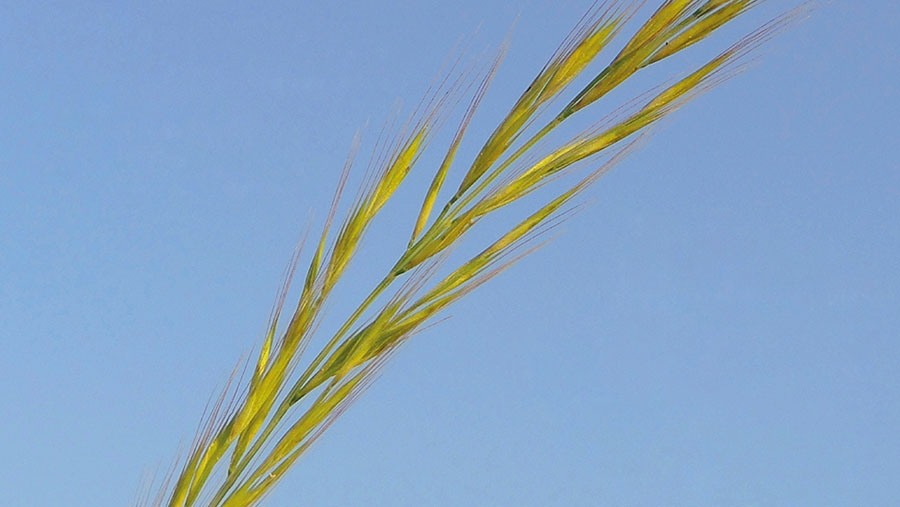