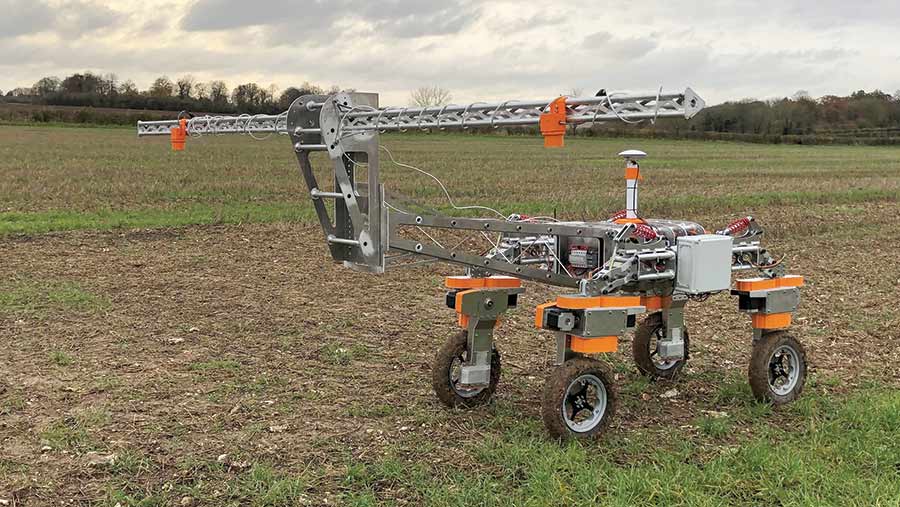 The world’s first commercial automated weed mapping service, capable of providing farmers with an individual plant view of their fields, is being launched across four UK farms this autumn.

Sam Watson Jones, co-founder of the Small Robot Company, says it is a major technical milestone for British agriculture that will enable further developments in robotic weeding and digital planting in the near future.

Watch the video of the robot in action and read the report below.

This is the first in a series of planned lightweight machines, which weighing much less than a tractor or sprayer, offers soil health benefits and fuel savings.

Armed with the mapping data, a second non-chemical weeding robot – which is still under development – will then tackle these weeds by using electric pulses to kill them, with shocks fired up every second and to 0.5mm accuracy.

Field trials of the weeding robot are planned for next spring.

It is not just weed control, the company also sees robot technology allowing inputs to be targeted at individual plants, cutting costs by up to 60%.

The company’s weed mapping robot – known as Tom – features a robust, bespoke design that is fully weatherproof, allowing it to go out in all conditions and even at night.

Designed from the ground up, the robot carries double cameras with a 6m-width camera angle and sub-millimetre pixel accuracy, which enables it to cover 20ha per day and at all crop heights.

Farmers will also have access to maps where each plant will be geolocated within 2cm accuracy.

Identification of weeds within emerging wheat is possible thanks to the artificial intelligence network called Wilma, which deals with the vast quantities of data.

“Tom generates the pictures, but Wilma is the brains behind the robots,” he adds.

Tom’s photographs provide data on wheat to provide yield predictions and a tiller count near to harvest.

It will also enhance other crop management practices with variable-rate nitrogen applications, adjusting rates according to plant densities, and identifying potential slug issues.

Work is now under way for Wilma to begin the identification of much trickier weeds, such as blackgrass, next autumn.

The robots will be available on farm via a service model costing about £140/ha, but is subject to change as development continues.

The weed mapping service is currently available on the four farms for £15/ha.

For the time being, Tom will be handled by a single robot operator, fitting into a small van so it can be easily transported from one farm to another.

Eventually, the Tom robot will live on farm permanently and cover every plant on farm every two weeks.

The company claims that the robots will boost yields and cut costs through more accurate and targeted use of inputs.

Commercial yields are nowhere near that of yields in trials where crops are grown in optimum environments.

There is, therefore, scope for yield enhancements through greater precision and accuracy in crop husbandry to drive maximum productivity, explains Mr Watson Jones.

“It’s challenging for growers to manage accurate detail in a commercial agricultural environment.

“This is where AI and robotics comes in as this enables us to manage crops on a plant-by-plant basis and properties of soil on a m/sq basis,” he says.

The robot’s lightweight design – it weighs just 150kg – will also bring many environmental benefits due to its kind nature with soil and minimal compaction risk.

This will allow growers to work land when large machines are unable to, which has been highlighted this year.

“The arable sector is working in a broken business model, where bigger machinery has been the answer to improved efficiency, but this is now driving poor thinking,” he explains.

“There are huge opportunities for agronomists and growers who embrace this new technology as the robots will effectively identify where issues are, so focus can be placed here, enabling greater areas to be covered,” he says.

The Waitrose’s Leckford Estate is one of four farms benefiting from the robotic weed mapping service this autumn, as part of its drive to adopt precision techniques and cut inputs. 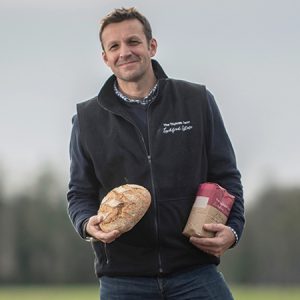 Andrew Hoad, partner and head of the 1,800ha Hampshire Estate, explains how the technology is on the cusp of the next agricultural revolution and will enable growers to add value to operations in a sustainable way.

“It’s truly amazing to be able to target individual plants and unlock their individual potential, allowing us to drive profitability in farming going forwards,” he says.

Some fields on the estate are more than 50ha with various soil types and areas more prone to pests, weeds and diseases.

Precision farming is key as agricultural margins are so tight.

Minimising the amount of inputs applied to land and identifying and responding to problems is essential for growers to generate more profits.

“By helping us be more precise and targeted in controlling weeds and managing pests, this next generation of farming robots could help us protect biodiversity on our land and preserve the natural environment for future generations,” says Mr Hoad.

The robotic developments are not about replacing humans, but focusing on regenerative agriculture and building up and preserving our soils.

“Introducing robots on farm is no threat to people working in the agricultural industry as there are so many other roles.

“It’s about freeing up workers from routine tasks so they can focus on other jobs,” he adds.