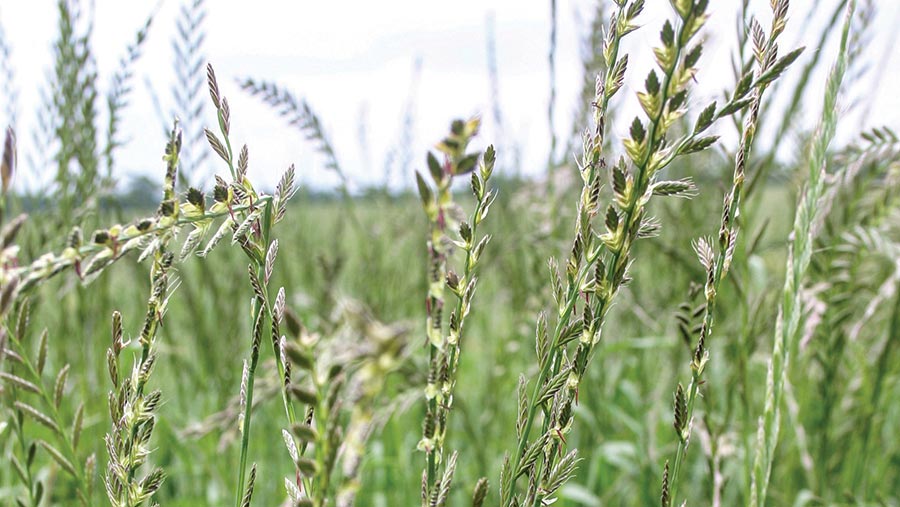 Italian ryegrass is becoming an increasing problem in UK rotations, particularly in autumn-sown crops because of rapid weed spread and cases of herbicide resistance.

The grassweed is more competitive than blackgrass due to its greater tillering ability, where each plant can produce more than 20 heads and 5,000 seeds, which can result in significant yield losses.

That’s why early intervention is key to prevent weed burdens from rapidly escalating.

Weed management specialist John Cussans, from crop research firm Niab, warns that managing herbicide-resistant Italian ryegrass in the UK is a very uncomfortable reality and that its control could be more challenging than blackgrass.

“The concern with ryegrass is that we are beginning to see increased tolerance and a lack of sensitivity to a range of pre-emergence herbicides.

“Resistance is more diverse and seen in a wider range of herbicides than blackgrass, with weed populations not responding to the active flufenacet,” says Mr Cussans.

A trial investigating 50 populations of Italian ryegrass showed significant levels of resistance with more than 50% of samples carrying double or triple R resistance to the herbicides Axial (florasulam + pinoxaden) and Atlantis (iodosulfuron + mesosulfuron).

Admittedly, this is not at the same level of blackgrass resistance, which in an equivalent survey was noted to have 85% of samples resistant.

“With enough exposure and agronomy practices helping select for weeds, we can see that resistance will build up in a range of herbicides,” he says.

Mr Cussans points out that crop monitoring and vigilance is therefore essential, as identifying patches of weeds early on will prevent future problems.

“You can achieve a lot by pulling out the first few plants by hand.

“Once you have large populations established in the field, it is difficult to control,” he adds.

Kent farmer Tom Reynolds, of Pent Farm near Folkestone, farms 200ha with his family growing wheat, barley, beans, maize and grass seeds, and also manages his own agronomy and contract farms in the local area. 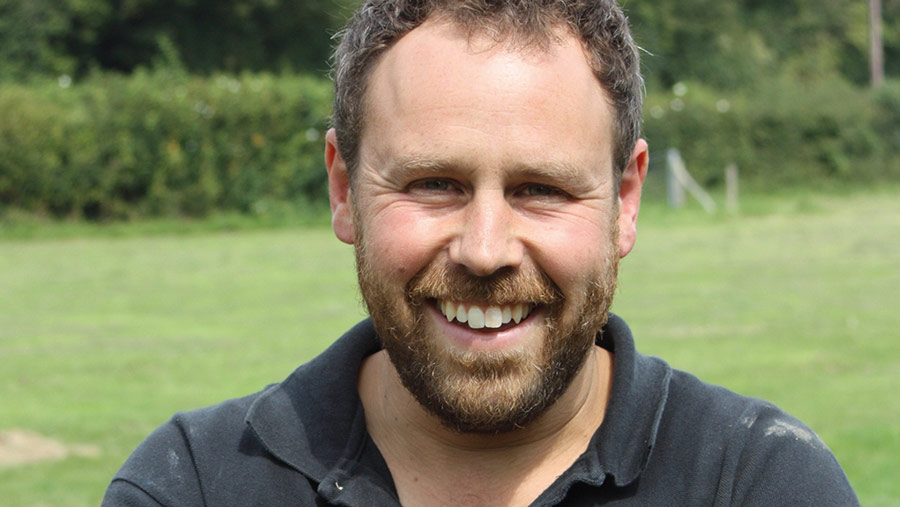 The family have a strong focus on no-till, with an aim to establish wheat crops with no cultivation, across his wide range of soils from heavy clay to chalk and brash.

Seven years ago blackgrass became a real issue on the farm, particularly on his heavy clay soils.

Grass leys
In a bid to reduce weed pressure, Mr Reynolds made the decision to introduce more grass leys into the rotation.

Most of his land is marginal for arable cropping, so keeping weed pressure to a minimum is essential as fields can easily become overrun by weeds.

A niche market was found growing red fescue, hybrid ryegrass and Italian ryegrass grass seeds, which has been the family’s main break crop for the past six years, successfully reducing blackgrass populations.

Results have been positive, with herbicide and fertiliser costs falling as a result of more effective rotation and input management, as just under half of the farm is established to grass each year.

However, Mr Reynolds is now concerned about the impact of ryegrass weeds that could threaten his rotation and business, as he noticed this is becoming problematic in the north of Kent.

“If resistant ryegrass species begin to take hold on the farm, it would make my rotation very difficult to carry out.

“Ryegrass has the potential to be worse than blackgrass, as it is harder to control.

“We need to take a no-nonsense and zero-tolerance approach to controlling the weed by scouting fields and using chemistry well, but sparingly,” he says.

Main weed focus
This is why ryegrass is now Mr Reynolds’ main weed focus, as a few patches have been identified in fields, which he has hand-rogued to help reduce future issues.

If managed correctly, he says that his two-year grass ley is sufficient to reduce grassweed pressures by taking multiple silage cuts and grazing grass to kill weed seed and prevent it from spreading.

He adds that when growing crops of red fescue, seeds are sown in wide 50cm rows with a Horsch Sprinter drill, where glyphosate is sprayed in between the rows to reduce weed pressure.

Mr Reynolds is one of a limited number of European farmers growing red fescue for seeds.

The crop is very slow growing and takes two years to establish.

A nurse crop of oats is used in the first year to help the grass establish, which is later removed.

Changes in agronomy drive changes in weeds, and as rotations and cultivation change, growers must be ready to minimise weed populations.

He therefore points out the importance of getting the message of identifying weeds out to people at the early stages, where there is still time to control populations that could become problematic.

Although ryegrass has a similar biology to blackgrass, Mr Cussans explains that its practical management is more challenging to control.

Cultural methods, such as delayed drilling and spring cropping, help reduce its impacts, but not to the same extent as controlling blackgrass.

This is because ryegrass seeds reproduce more effectively, germinate differently and can tolerate being buried for longer periods of time due to their larger seeds.

Hand-roguing or spraying patches of the weed should take place in early June to prevent the weed from going to seed.

Farms growing ryegrass leys as a part of their rotation should pay particular attention to preventing seed production and spread.

He says that the pre-emergence herbicide Crystal provides a successful start to grassweed programmes as it contains 60g/litre flufenacet and 300g/litre pendimethalin.

“Crystal is a consistent, reliable performer that gives growers a good solid start to grassweed control,” he says.

Mr Kevis states that combinations or sequences with the actives such as Tri-allate and Diflufenican would further increase
control.

He also mentions the likely imminent launch of a new mode of action pre-emergence herbicide Luximo (cinmethylin) from BASF, which provides up to four weeks of effective residual control of grassweeds, with no known cross-resistance.

This is expected to be available for UK growers in autumn 2021.

Mr Neville farms with his father and brother in Forbes, where the family grows oilseed rape, followed by two years of wheat and then barley and oats.

After experiencing significant ryegrass issues, Mr Neville advises UK growers to be proactive when it comes to targeting ryegrass weeds, before the problem expands.

“It’s key to treat ryegrass issues as early on as possible, as what starts as a minor issue will quickly turn into a large problem in the blink of an eye.

“Growers need to be on the front foot as it takes a number of years to reign a weed problem back in,” he warns.

This season marked the first time Australian growers were able to use the grassweed herbicide, Luximo.

The new mode of action herbicide has allowed Mr Neville to get on top of his ryegrass issue and successfully control weed populations, which he aims to integrate into his rotation to avoid risk of resistance.