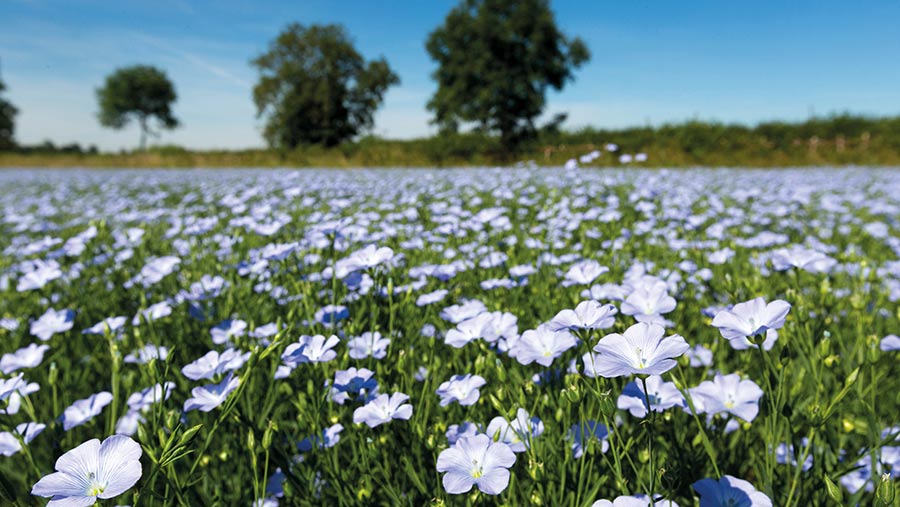 Linseed is looking an increasingly attractive spring break crop, with the price of harvested seed at a five-year high and it being one of cheapest crops to grow.

Prices have been pushed higher by buoyant demand from the health-food sector and lack of supply due to poor harvests in Russia and the Ukraine, with traders encouraging growers to take a look at the crop.

“We can sell it, so there is a big opportunity for farmers to grow the crop with linseed prices at the highest level for five years,” he tells Farmers Weekly.

The later-sown spring crop also offers more time to control troublesome blackgrass, give a boost to following winter wheat crops and may be a better bet than pulses after a very wet winter.

”Delivering high yields of 2.5t/ha and with contract prices of £400-£500/t, it is undoubtedly one of the most profitable spring crops available right now,” he adds.

UK-produced linseed could also be favoured in a post-Brexit era given possible interruptions of supplies of imported linseed, which has refocused buyers’ attention on home-grown crops.

Linseed is used in animal feed and the seed is also crushed for use in paint and oils, but it is its use in the health-food market that has led to a big rise in demand.

The UK area of linseed harvested in 2020 more than doubled to 33,000ha from just 15,000ha in 2019, with about three-quarters of the crop being spring sown and the rest drilled in the autumn.

Mr Wood argues that linseed is a low-input crop, and after a very wet winter and possible difficulties in creating good seed-beds, the season may favour linseed over peas and beans.

Varieties with seed yields without fungicide use (control yield 2.2t/ha)

While many growers have cut their oilseed rape areas or given up altogether due to cabbage stem flea beetle and establishment problems over the past few years, the demand and price of linseed has risen.

Mr Wood says the spring linseed variety Bingo offers the greatest consistency and yield of those on the AHDB Descriptive List, while the newer variety Bliss could offer strong competition to Bingo from 2022, when more seed is available.

James Baxter started growing spring linseed as a break crop to reduce his farm’s reliance on oilseed rape and widen his rotation, and says it has been a very good move agronomically and economically.

Farming in south-west Leicestershire, he says the crop is cheap to grow, gives a good yield and left a very good soil structure for a following winter wheat crop.

“The target yield of 2.5t/ha was comfortably achieved and satellite yield monitoring showed that some parts of our fields had achieved more than 4t/ha,” he says.

He drilled 80ha of the spring crop at Valley Farm, near Wellsborough, just west of Leicester, for his first linseed crop in 2020, after a few years of absence on the farm.

The spring linseed variety Bingo was drilled between 18 and 20 April into a clay loam soil at a drilling rate of 650 seeds/sq m, and the crop emerged and grew well despite a very dry spring, with a standard herbicide applied.

He applied 120kg/ha of nitrogen with 40kg/ha of sulphur. He split the nitrogen, with 40% applied shortly after drilling and the remaining 60% applied in June at the green bud stage.

“One fungicide spray of tebuconazole was applied post flowering and the crop then received no further inputs until harvest, when it combined easily in mid-September,” he says.

Mr Baxter adds that linseed’s role in controlling blackgrass, high gross margins and significant market demand makes it a good crop to grow, while it leaves the ground in “fantastic condition” for a following wheat crop.