By removing low yielding areas from his cropping, Jon Birchall hopes to increase the overall profitability of the Sundorne Castle Estate near Shrewsbury, Shropshire.

Mr Birchall has identified those areas which produce a net profit of less than £540/ha, with the aim of placing them in stewardship options which pay the equivalent amount.

As the estate is contract farmed with no fixed machinery costs, entering more of the cropping area into stewardship would increase profitability while minimising the risk.

Mr Birchall manages the 1,821ha Sundorne Castle Estate as part of his role as director of agribusiness at Carter Jonas, retaining the management of the estate from a previous role.

Although yield mapping data had been available to him for many years, he felt the data was being under-utilised as comparisons between different crops was meaningless.

However, joining Carter Jonas last year meant gaining access to the company’s geographic information system (GIS) department, which has allowed him to recalculate the yield maps to show net margin.

Now Mr Birchall is able to compare profit data over several years and identify which areas are consistently underperforming.

So far 162ha has been mapped across four fields to prove the concept, and he has employed a traffic light approach. Areas producing a net margin of less than £540/ha are marked red, up to £640/ha marked orange and above £640/ha marked green.

“We were surprised at the percentage of red,” Mr Birchall says. “We expected red around the outside of the field on the headland, but I was quite shocked when I saw it. It makes you realise the number of factors involved in lifting performance.” 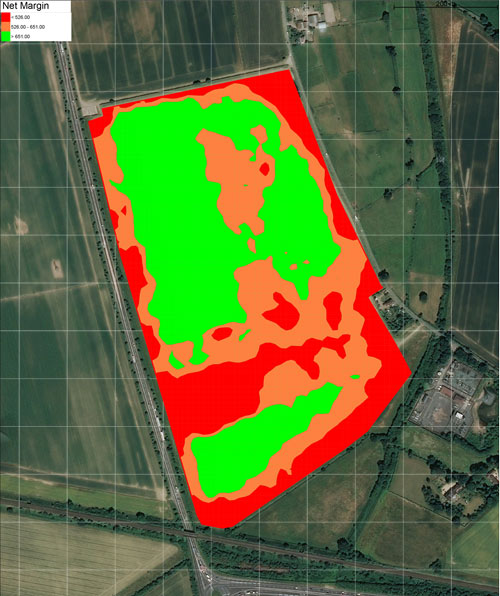 Margin map showing the red, amber and green areas of a field

Lower yields around the edge of the field are partly due to shading and competition, but also  compaction on the headlands.

“The concerning thing is we actually have large grass margins to counter the headland effect,” he says.

“The accepted wisdom is you can get away from compaction, but actually we have just moved the compaction further into the field.”

The fields have all been zoned according to soil type, which is mainly sandy loams but can be variable.

Some red areas indicate where soils are particularly heavy or light, such as over gravel, but also reveal compaction caused by late harvested fodder beet in 2015.

With two contractors being employed, a fixed price is paid for each hectare farmed, so Mr Birchall’s plan is to remove the headlands from cropping and instead place them in stewardship schemes.

“A lot of stewardship options pay £540/ha, and some of our crops are generating less than that, a situation that will only get worse with farm support going,” he says.

“If the area is not performing and we take it out of cropping we will lose fixed costs at stroke, so it’s a particularly good concept for contract farming.”

Mr Birchall plans to plant pollen and nectar mixes on 15m of compacted land around the edge of each field which he will place into mid-tier stewardship.

Then, to avoid simply moving the problem, he intends to create a sacrificial headland 3m wide on which he will plant a cover crop, giving sprayers the necessary 16.5m they need to turn without folding up.

He also plans to place shallow areas of soil over rock into stewardship as these areas are unlikely to be improved to a level which will make them profitable.

Placing the headlands and the gravel areas into stewardship would increase the net margin of the whole field by £35/ha, except when it is being used for potatoes.

Imaging from last season shows that areas marked orange on the net margin maps corresponded with areas of the crop which died off in the drought due to a higher sand fraction in the soils.

Mr Birchall plans to target manures and composts on to these areas to improve moisture retention, and improve the workability and soil texture of clay areas in the same way.

He would also like to explore the possibility of varying his cultivations according to the zones, and also experiment with reduced tramlines.

The stewardship margins will be put in place this autumn for the first time as data collected over the past few years, when cereal prices have been good, has given Mr Birchall faith in his findings, but he would like to map other farms to test the theory.

“It’s not difficult to average net margin across years, but it is harder to get the financial data to do it with,” he says.

“What we would like to do is look at other blocks of land which have the data and map them to see if the theory is the same there.”