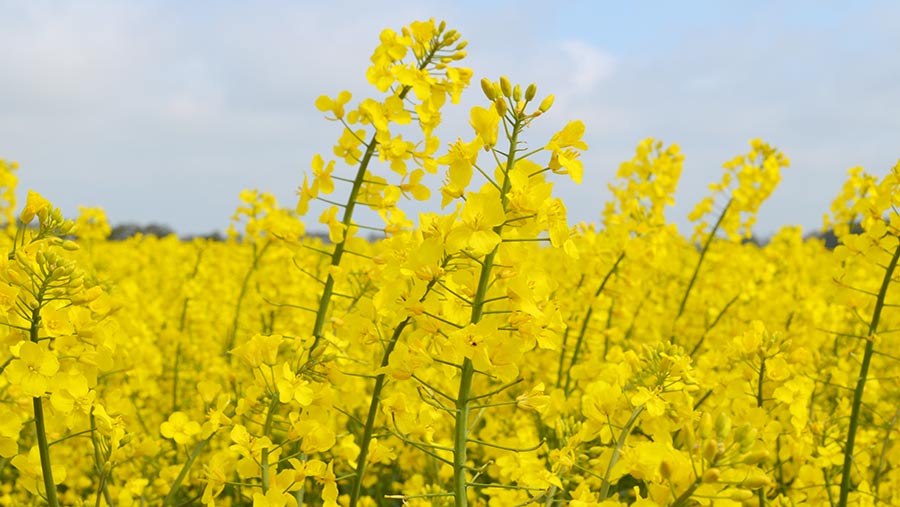 With UK oilseed rape growers bedevilled by dry weather and flea beetles, David Jones travels to Scandinavia to see how farmers there are succeeding with the crop.

In the first of a three-part series, he visits a top-yielding big farming estate in Denmark, and then in a  subsequent story he meets a Danish organic rapeseed grower who achieves good yields and sells his crop for a sizeable price premium.

Then, in part three he crosses over to Sweden to see how one oilseed rape grower is lengthening his crop rotation to cope with an increase in clubroot disease.

Bo Jensen won a key oilseed rape yield competition by following a three-pronged establishment strategy and also by allowing his crop to bulk up before harvest without any spray desiccation. 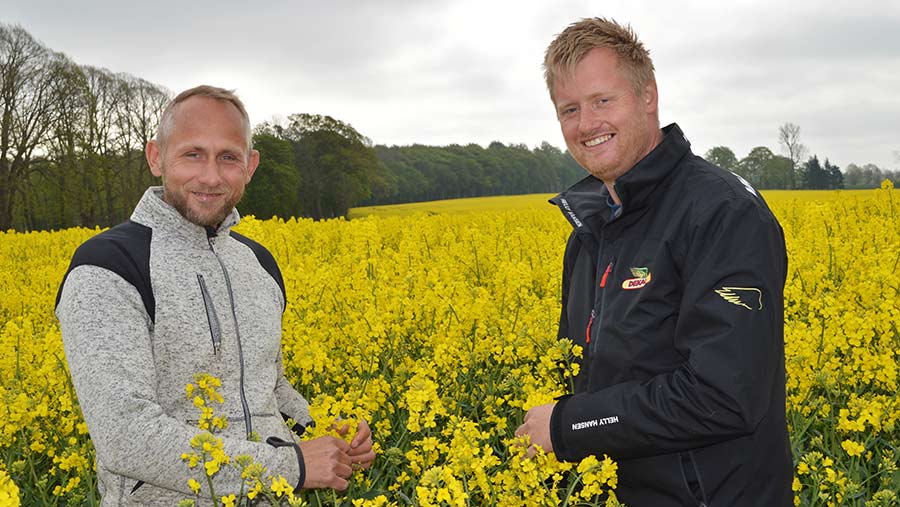 The Danish farm manager came top in the potential yield category of the Yield Enhancement Network (YEN) for 2018 harvest, run by crop consultancy Adas, with a yield calculated at 66% of his farm’s potential.

Drilling date, seed-bed fertiliser and seed rate were the key elements of his autumn programme to achieve a crop yield of 4.55t/ha, compared with his yield potential of 6.9t/ha on his light sandy loam soils.

“If you get it right in the autumn, things have to go really wrong in the spring not to get a good yield,” he tells Farmers Weekly.

His five-year average rapeseed yield comes out at 4.2t/ha, but last summer one field managed 6t/ha despite drought conditions and gave him high oil contents with a percentage in the high 40s.

A further factor in helping his crop performance was the move away from desiccation some five to six years ago, as he looks to leave the crop for as long as possible to boost his yields and oil content.

He now harvests his oilseed rape after winter wheat to leave the last pods for as long as possible to mature and so make for an easier harvest, while using pod-shatter varieties to limit his harvest losses.

The farming operation he manages is dominated by herbage seed production and this crop gives him a good early entry for oilseed rape, as well as allowing him the two-year cereals break demanded by growing seed crops of hybrid rye on the farm.

He manages three estates on the Danish island of Funen between the Jutland peninsular and the island of Zealand, where Copenhagen is situated, totalling 2,250ha of arable cropping with a base at the Ravnholt estate.

He grows 286ha of oilseed rape in a one-in-five year rotation with an entry crop of perennial ryegrass or tall fescue grown for seed, which is often harvested in the last week of July.

After harvesting the herbage seed, the stubble is cut to give an even finish, glyphosate applied to kill any weeds then the ground is disc cultivated twice and sown with a Horsch Focus dril.

His three key aims are:

His aim is for big bushy plants grown in 30cm rows, with a good density within the rows to give well-branched plants with no spindly thin growth upwards. With good autumn rain in Denmark, establishment is usually good.

The preference is for fast-growing hybrids, with Expansion his main variety along with Exclaim and the early maturing Exlibris. He compares these with a small area of Butterfly, which is Denmark’s most popular conventional variety.

Cabbage stem flea beetles are being increasingly seen at low numbers, so two pyrethroid insecticide sprays were used in September and October. These appear to have given good control of beetles and prevented higher larvae numbers.

Spring nitrogen amounts to some 160kg/ha, and with 60kg/ha at drilling this gives a total of 220kg/ha, which may be low by YEN standards but he is wary of putting too much on as his soils can lack moisture in the summer.

He tends not to use plant growth regulators, but following a dry summer in 2018 he was concerned about high nitrogen residues in the soil so opted for growth regulation this spring mixed in with a fungicide for light leaf spot disease.

YEN evidence suggest top yields come from crops that have had as long a time as possible between flowering and harvest, so his decision to stop using glyphosate for desiccation gives the crop more time to put on weight.

“We want to leave the crop as long as possible and typically it will be harvested in the first week of August,” he says.

The aim is to see the last pods mature before combining and any pre-harvest losses are minimised by the pod shatter resistance of his hybrid varieties.

The YEN entry came from a big field of 31ha, which was harvested on 1 August, a few days earlier than normal due to dry weather, giving oil contents at 48-49%.

Three estates on the island of Funen managed by Mr Jensen

For the future – he is looking to boost the crop’s net income by saving on inputs, as he feels he is getting the most out of his light soils.

“Oilseed rape is an important crop for the rotation, although an increasingly expensive one to grow,” he says.

So he is now looking at varieties with good disease resistance, cutting out insecticides sprays against pollen beetles and cutting back other costs where he is able.

Soren Lykkegaard Hansen of seed breeder Dekalb, which bred the hybrid varieties used on the farm, agrees with this approach based on the season.

”We need to be flexible and use inputs depending of the season,” he says.

The area of winter oilseed rape in Denmark could rise to as much as 165,000ha from 150,000ha currently in the ground, as the crop in the ground looks good this year.

Lars Ipsen, sales manager for the Nordic and Baltics for seed breeder Dekalb, says the current crop has not suffered from any drought problems and flea beetles are generally controlled, so the area could well go up next year.

August is often a wet month in Denmark, so crop establishment was not a big problem, while with high soil temperatures and plenty of nitrogen from the previous crop, this season’s crop growth has been good.