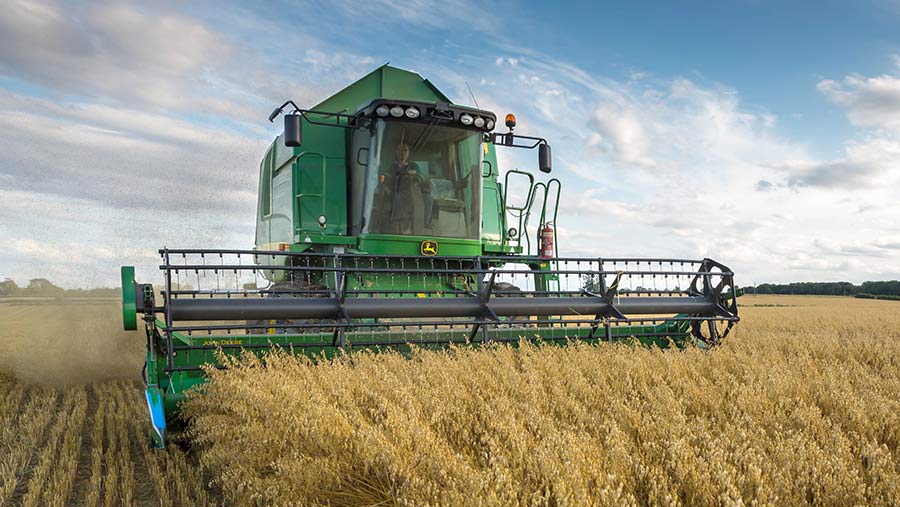 White and purple wheats, food barleys, special types of beans, oats for health drinks and even chickpeas are some of the novel crop options being investigated by Agrii.

Grassweed issues and the loss of pesticides mean farmers are widening their rotations and increasing their spring cropping areas. On top of this, oilseed rape is proving problematic in some parts of the UK.

The firm has already seen success with Explorer malting barley, naked oats under the Superioat brand and German E-wheats..

Working with Glencore and Budweiser, Agrii has contracted farmers to grow a specific malting barley variety that suits the brewers’ process.

The tonnage has increased from 430t to 85,000t in six years and the company has developed an agronomic package that helps growers maximise yields and deliver what the brewer wants.

But this is only the beginning, there are many more potential crops that are being looked at.

For some, Mr Smith says the market is already there.

“So it’s a case of using our existing R&D system to see if it is possible to grow these crops.”

If so, the company then develops a growing system that ensures farmers can reliably deliver the yields.

“In contrast, for some crops like coloured wheat, we already know how to grow them and it’s more about getting food manufacturers interested.”

In addition, are they prepared to pay a premium? This may be needed to cover the extra cost of growing them in the UK, he says.

Naked oats are already established in the market alongside Explorer barley and German E wheat. They differ from conventional oats in that they naturally thresh free from the husk during harvest.

Consequently, they have a higher protein content (13%) than conventional oats and their 9% oil content makes them an energy rich product.

Contracts (100% buyback) are available in England and Wales with a premium over feed wheat of £30-45t/ha.

“The varieties are here, the agronomy is coming along and markets are growing,” says Mr van Heyzen.

One attraction for growers is its lower variable costs than oilseed rape and second wheat, resulting in gross margins comparable with existing break crops.

However, getting good yields is the key to its profitability and raising them from 5t/ha to 6t/ha can add £100/ha to margins. To achieve this extra tonne, Agrii has put together an agronomy package.

It includes using a special phosphite, zinc and manganese seed treatment to get crops off to good start.

“We have found that micro-nutrition is key to grain size. Last season which was a challenging year, there was a 20% reduction in screenings just by changing crop nutrition.”

In the UK, farmers grow barley for distilling, brewing or animal feed rather than food.

However, Mr Smith believes there are opportunities for the naked form in the food sector. Like naked oats, the outer coats threshes free when harvested.

One valuable advantage of barley is its high level of beta glucans and fibre, which helps digestion and to prevent type 2 diabetes.

“It is an easy way to get beta glucans into peoples’ diets.”

He is also looking at waxy types, which offer valuable properties for food processing, as they can absorb more water and increase viscosity.

There is a range of potential markets for food barley, including breakfast cereals,  artisan breads and rice alternatives, not forgetting pet foods

He points to Japan which saw a dramatic increase in food barley use in 2016, jumping from 6,000 to 28,000t. US farmers are growing and exporting food barley to Japan.

“This shows the potential for increased demand in the UK, as well as growing them for export.

“We can grow them, as they are very similar to conventional barley. So we are screening many crosses in an attempt to find types really well-adapted to UK conditions.”

By 2054, global plant protein consumption is forecast to reach 943m tonnes in the UK.

Most is at present imported, meaning there is an opportunity to grow more here. Examples include soya, chickpeas, field and haricot beans, and peas.

One alternative to imported soya is field beans, and one UK retailer is intent on replacing 5% of the imported protein in pig rations, thanks to a new type of bean.

Originally coming out of the Optibean project, the bean contains very low levels of vicine/convicine and last autumn saw the PGRO add a new LVC category in its recommended List.

Vicine and convicine are not easily digested by animals, therefore, these beans can be fed at higher levels to pigs and poultry than conventional varieties.

Working with Waitrose, Agrii has recruited a number of farmers with an exclusive contract to grow the beans for the retailer’s monogastric producer group.

“Growers are paid a premium of £40-50/t over feed wheat futures and one benefit for growers is there are no bruchid beetle deductions,” says Mr Smith.

The Waitrose contract is in its second year and he believes it could grow, as well as other producer groups adopting LVC beans.

Other alternative proteins are further off, one being UK-grown soya and Agrii is in its fifth year of looking at more than 20 different varieties to identify the most suitable for UK conditions.

Maturity is the key issue, although this wasn’t the case in last year’s hot summer.

“But you do need the non-GM premium to make it compete financially,” says Mr Smith.

There are other pulses, such as haricot beans, with mroe than 1.5m tins of baked beans produced a day from imported beans alone.

Although it is still in its early days, Agrii is also closely investigating varieties for UK adaptability.

Last year, one white haricot variety was harvested only 98 days from sowing, suggesting maturity may not be a problem, and it is being trialled again this year.

It is a low input crop and Mr Smith believes the key will be getting the quality. There may be problems with pods being close to the ground.

Similarly, there is a ready market for chickpeas in the UK with 30,000t imported from around the world. 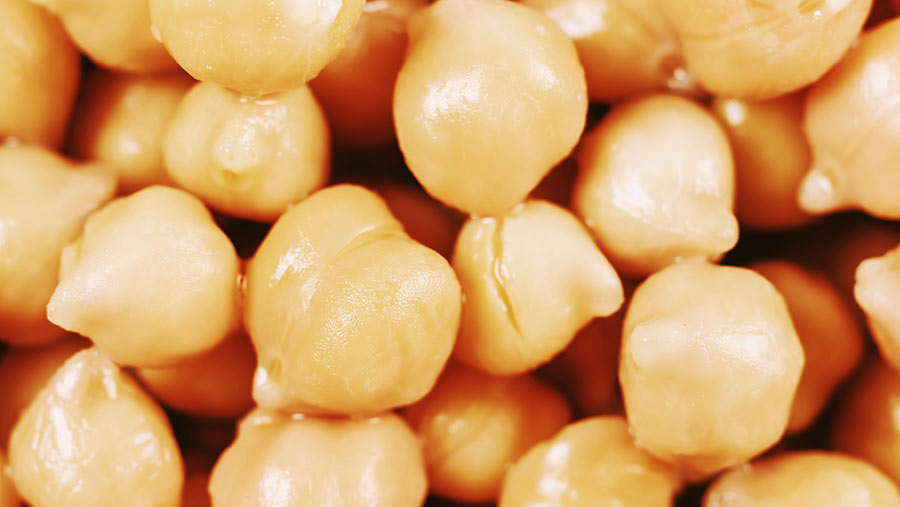 “We had a look last year and saw good maturity. We are repeating the work this year and have variety trials at various sites.”

The UK imports more than 200,000t a year of strong wheat, which contains excess gluten for breadmaking. These include Canadian red wheat, spring wheat from North Dakota and German E wheats.

UK growers are already growing German E wheat type, MV Frederica and Agrii is looking at other varieties, both winter and spring, to see if they can also deliver in the UK.

“The key question is can we get them to stay standing and hit required grain specs to ensure millers get the right product,” says Mr van Heyzen, who aims to introduce another variety in the next 1-2 years.

For spring cereals, Durum wheat may prove to be an option, with small amounts already being grown in the UK.

The wheat is used to make pasta, and Agrii is looking at varieties from the EU and South Africa, the latter being bred for growing under irrigation.

One is showing good promise. “Last year it out-yielded all the other spring wheats on the market and shows it can be done,” says Mr van Heyzen. 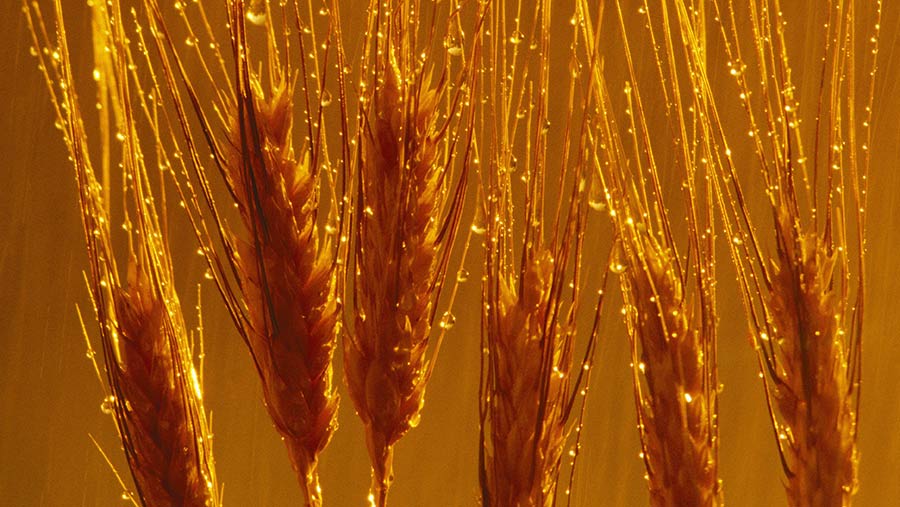 Agrii is now working with end users and sees potential, especially if tariffs are introduced for imports after Brexit.

Another interesting market is white wheat. “The difference is in the colour of the aleurone layer – being red or not,” explains Mr van Heyzen.

“Varieties on the recommended list, such as Skyfall, are classed as red wheat and when milled, you get that darker colour which results in the darker wholemeal loaf.”

With white wheat, wholemeal loaves look white, but with all the fibre and not the flavour of brown.

Currently, millers are buying in French white wheat and the next step is to convince them and bakers that UK growers can reliably produce it to their specs.

“One variety being tested has a good hagberg, decent protein and mills white. There is the market, we just need to demonstrate that we have the product,” says Mr van Heyzen.

Another niche cereal is purple/black grains, which are high in  anthocyanin pigments. These compounds are said to have anti-carcinogenic properties and are also in superfoods such as blue fruits.

Purple wheats are grown in the US, Canada and Australia and made into purple loaves, which are sold as health products.

The key is to find varieties that retain their colour. “For example, if you flake it does it stay purple so the consumer can see it?”

Again, Agrii is looking at different types here and while it is still in its early stages, there has been some interest from the food industry. 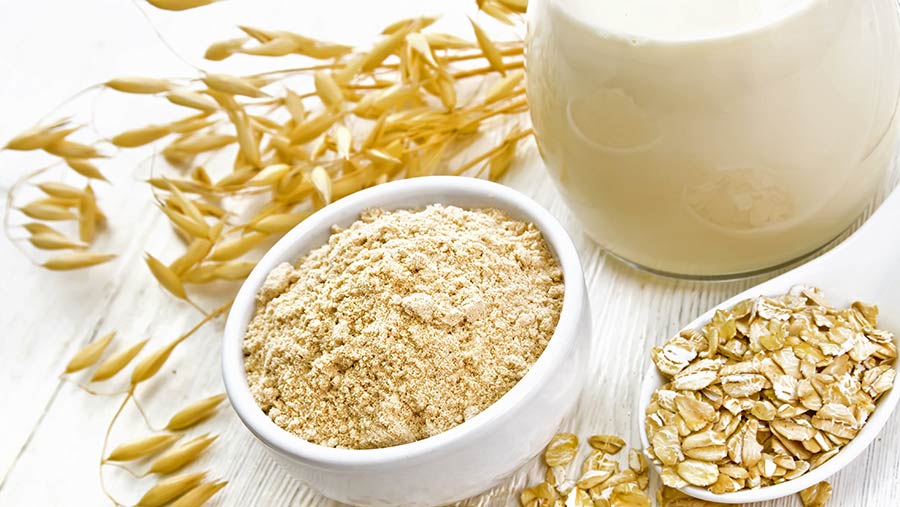 The market for plant-based drinks is set to expand substantially in the next few years, and arable farmers could have a role in growing the crops to make them.

Skye van Heyzen highlights that the global industry is set to grow from £7.5bn to £26bn in the next five years. Reasons for their success include being lactose and gluten free and non-GM.

Some crops could also be used to supply beta glucans and the milder flavour will appeal to consumers that don’t like the taste of milk.

Working with one breeder, Agrii has started trials with an oat-based product. There are specific oat varieties for this use and some have been bred in similar climes to the UK.

Mr van Heyzen is confident that UK farmers will be growing oats for plant-based drinks within the next 2-4 years.

Crops where a market exists, but we don’t yet grow them

Crops we can grow, but which don’t yet have a market