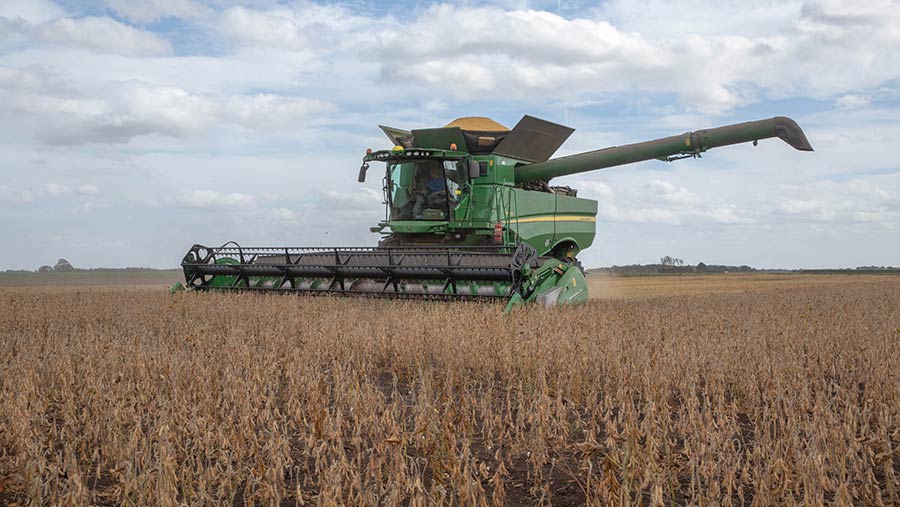 Kent soya grower Simon Ashworth is pleased with his harvest this season, viewing it as a low-cost crop which will help him prepare for Brexit, control blackgrass and provide a good entry for wheat.

He is a second-year soya grower and although his yield was down this year at 2t/ha compared with 3t/ha in his first year, he is still content when looking at how poorly other spring crops performed this year.

“I am focused on cutting costs before Brexit and as we will always import soya I think the crop is a good bet,” he told Farmers Weekly.

See also: Soya on the rise as area nearly doubles this spring

Reflecting his confidence in the crop, he is considering expanding his area by 50% from this season’s 28ha of the Ukrainian variety Siverka.

His is looking for break crops between his first winter wheats, and uses combine peas, soya, winter linseed and maize, which have helped cut his blackgrass burden to “less than hand rogueing”.

“I find that soya really smashes blackgrass even better than peas, and is easy to combine. In a difficult year for spring crops, the soya has done well,” he says.

Despite the late spring, the crop was drilled in May but then received only 10mm of rain until harvest and took two days to cut on September 18 and 19.

He farms 720ha at Scotney Court Farm, Lydd, Romney March in Kent on a range of soil types, with the soya grown largely on silty soils over sand.

Mr Ashworth finds that soya is a good entry to his bread and biscuit winter wheats, while it also spreads the harvest – combined peas often have to be cut just when the wheat is also ready.

The UK soya crop area rose sharply this year with about 180 farmers growing 3,200ha, and Soya UK, which supplies seed and buys back the harvested crop, hopes that the area may reach 5,000ha next year.

Prices for non-genetically modified soya grown in the UK are currently £360-370/t ex-farm, but as a legume it is seen as a low input crop and there is potentially a big demand, with the UK importing 3m tonnes each year.