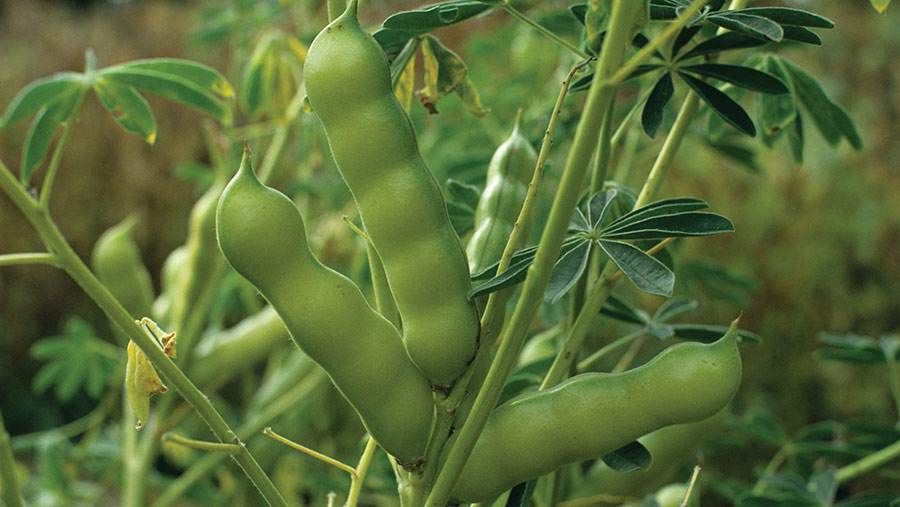 Lupins could soon feature in arable rotations across parts of the UK, offering farmers a true break crop with potentially high margins along with valuable soil-improving benefits.

The seed is a high-quality protein that could replace a chunk of the imported soya used in livestock rations, being a sustainable UK-grown alternative.

“So it’s not a case of someone with a couple of fields, it is already an established crop that could easily be expanded, as we have the knowledge to grow it.”

Hurdles to growing it

So why hasn’t the spring crop already taken off? Mr McNaughton says there are two key reasons why the area has remained static.

First is weed control, which until recently has proven to be a headache with the absence of legal chemistry.

But over the past three to four years, the situation has improved with Extensions of Authorisation for Minor Use for three pre-emergence herbicides.

These are Nirvana (imazamox + pendimethalin), Stomp (pendimethalin) and Gamit (clomazone). There is also a post-emergence option in Lentagran (pyridate).

“We have pre-emergences plus a reasonable post-emergence, so the crop is now on a par with peas.”

The other hurdle is the absence of a market, with a lack of take up by feed compounders. But that may be about to change with Frontier and ABN conducting feasibility studies into white lupins (see panel) as a livestock feed.

One key factor in lupins’ favour is its high quality, says Mr McNaughton. Both lupins and soya have good levels of sulphur-containing amino acids, important in high-performance pig and poultry diets and with high-yielding dairy cows. “They need rocket fuel and both soya and lupins are that.”

So if a compounder gets on board, with buyers Mr McNaughton sees the crop expanding to tens of thousands of acres.

So what could a UK industry look like? Mr McNaughton believes it would be a mix of blue and white, according to geography.

Blue, white and yellow lupins are actually different species in the same way that wheat, barley and oats are different cereals, he explains.

Yields of yellow types are just not good enough, so that leaves blues and whites.

Therefore, whites are preferred, but in Lincolnshire and Staffordshire, he advises switching to blues as they are earlier to mature, especially as growers no longer have the desiccant diquat.

Whites are typically combined in early to mid-September, while blues are cut in late August.

What about soil type?

One limitation has been soil pH, but modern varieties are more tolerant.

White lupins are more tolerant and can thrive in soils up to pH7.9, while blues can go up to pH7.3, says Mr McNaughton.

“Essentially, don’t grow them on chalky downs as you get chronic iron deficiency once the root hits alkaline conditions.”

The only other place they are not suited to is very heavy clay, such as in Essex.

“They are OK on clay loams, but not on heavy, slabby proper clay. They also suffer from compaction.”

He points to Nottinghamshire sands, the Brecklands and Dorset sands as being ideal for the crop. “Most arable land in East Anglia, East Midlands and Cambridgeshire will do well,” he adds.

So why grow lupins?

There are a number of benefits to growers. The first is that they are cheap to grow, requiring minimal inputs and in contrast to other break crops like oilseed rape, they are largely unaffected by pests and disease.

There is one disease, anthracnose, that can do a lot of damage if left untreated. But it is easily identified and treated with basic fungicide chemistry.

Mr McNaughton points out that lupins are better than beans at fixing nitrogen, with 230-240kg/ha compared with 180kg/ha. “You see the highest wheat yields after lupins.”

Like linseed, lupins are good for improving soil structure and unlocking  nutrients from soils, as the pulse exudes organic acids from its roots.

One question asked is how much they are worth in the absence of a UK market.

They are obviously worth more than beans in terms of feed, while compounders say they don’t see 1kg of lupins as being equal to 1kg of soya.

So Mr McNaughton says if you assume they are halfway between beans and soya, they are worth about £275/t, assuming soya at £350/t and beans at £200/t.

In conclusion, lupins have the potential to be a valuable break crop, improving the health of both arable rotations and soils with a UK area similar to combinable peas.

They offer benefits to livestock farmers as well as growers.

For some years it has come down to whether compounders would start using them in livestock rations.

But things have changed. There is now an increasing focus on sustainable UK protein sources because of growing concerns about imported soya.

This is why ABN (see panel), is looking at the crop again and this may be just what is needed to see the crop start to take off. 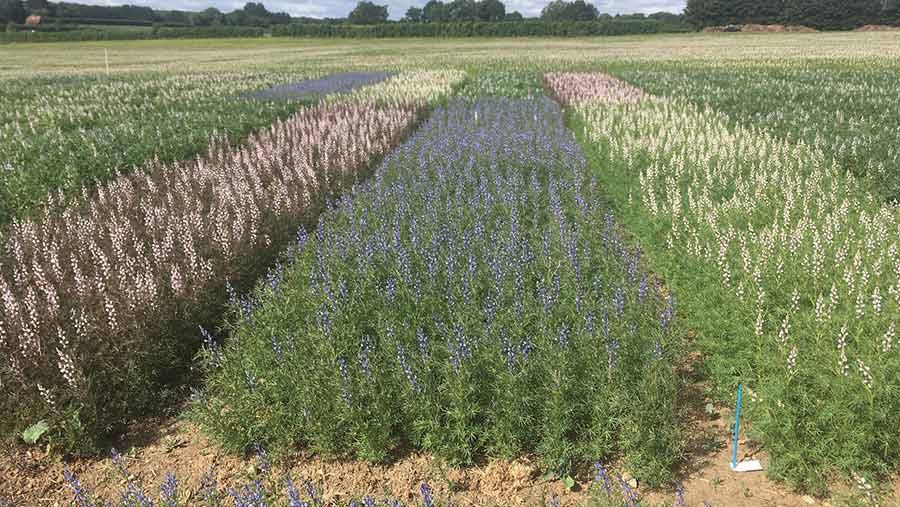 AB Agri, which has agronomy and feed compounder divisions in Frontier Agriculture and ABN, is looking at the feasibility of growing and including UK-grown lupins in livestock rations.

The group is looking for new and alternative sustainable protein sources for pig and poultry rations.

The aim of the feasibility study is to use Frontier’s technical crop production expertise to look at how to grow lupins and then be able to scale up so that compounders can gain confidence in the potential supply of the protein.

The study started in 2018 and last year, there were 240-280ha of white lupins in the ground, mainly in Kent. A similar area is being drilled next spring.

There have been a number of lessons learned, including the need to choose the right site. Lupins tend to suit lighter to medium land, because they don’t like compaction.

“They are pH-sensitive and if you get caught out they will struggle. Our agronomists will check individual grower’s suitability in terms of location and soil type before putting them forward to supply this study.”

Crops do need a drink early on when establishing. But after they have had rain, they are a lot more drought-tolerant than peas and beans, having big tap roots.

With weed control, Frontier is looking at other herbicide options with view of securing extensions of authorisation for minor use.

“We are keen to support the crop,” says Mr Nightingale.

Looking to the future, he doesn’t see lupins as an outright oilseed rape replacer.

“There won’t be enough to fill the gap, but it could prove a useful break crop depending on soil type.”

He believes it could eventually be a crop with a similar area to combinable peas, at about 50,000 ha.

“It will be an extra option for farmers in the right location and soil type.”