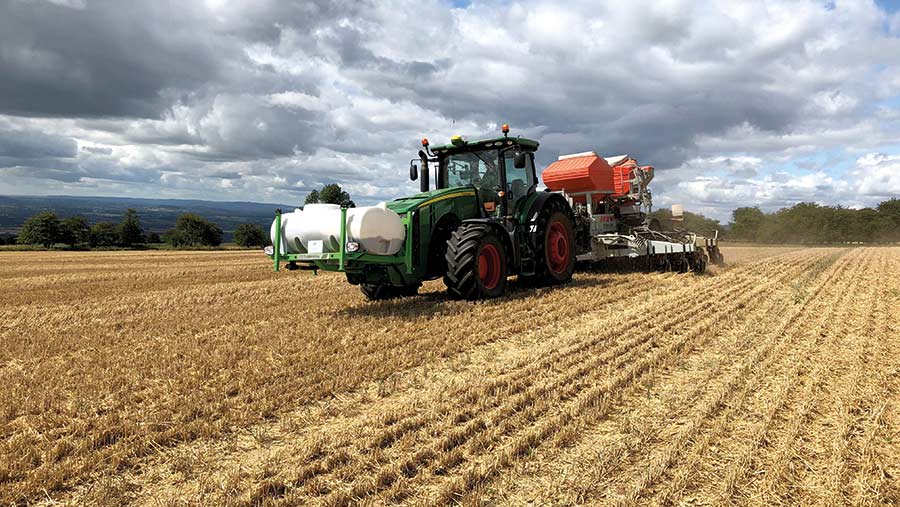 There is an increasing focus on improving soil health as farmers look to introduce more sustainable arable cropping systems, and the finalists of the Soil Farmer of the Year 2020 competition are showing how it can be achieved.

Farmer Weekly visited both farmers to discover some of the secrets to their soil success.

See also: How to dry grain more efficiently in a wet harvest

This year’s joint winner of Soil Farmer of the Year, Jake Freestone of Overbury Farms, plans to continue the journey he embarked on in 2015, when the decision was taken to farm in a way that improves soil, water and air.

Starting with soil, he introduced no-till across the 1,000ha of arable land he manages on the Worcestershire/Gloucestershire border, having been convinced while doing his Nuffield scholarship of its potential to improve soil health. 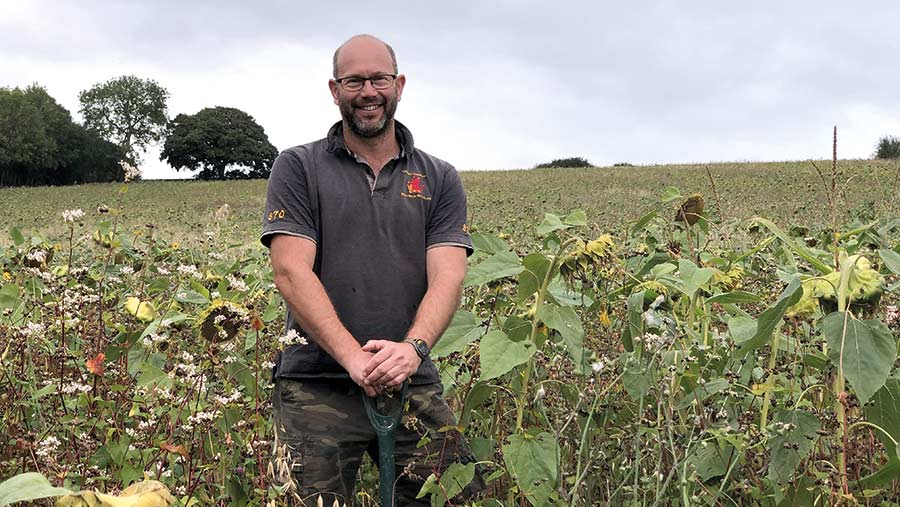 Since then, he has widened the rotation, bought cover crops into the system, incorporated manures across the varied soil types and integrated livestock with the arable enterprise, all of which have helped to improve the resilience and health of his soils.

He has seen efficiencies improve and costs come down, but the farm is also experiencing wider benefits that go beyond soil and can be more difficult to measure – such as greater biodiversity, less soil erosion and better water management.

Not content to stop there, Mr Freestone has now set up an intensive composting system, so that he can make good use of biological inputs that are brewed from the farm’s different soil types, along with other raw materials that support their varied biology.

He has three “recipes” on the go in bio-reactors, reflecting the three main soil types found across the farm: sand/gravel, Cotswold brash and clay. The result is a rich source of inoculum based on biology found in the farm’s fields, which can be used as a soil drench at drilling and for making compost teas.

“We stopped using chemical seed dressings four years ago to prevent any adverse effect on the soil fungi we are trying to encourage,” he explains. “All the seed is tested prior to drilling and we are now seeing faster germination and emergence.”

He admits that the logistics can be quite hard work with the new system, as the final product needs to be used within 24 hours, but says his seed costs have more than halved – down from £40/ha to £15/ha.

The composts are mixed with molasses and milk and then sprayed in-furrow at drilling at a rate of 100 litres/ha, via a front-mounted 1,200-litre tank, on both cereals and oilseed rape. Injected down into the soil, along with silicon and N and P accelerating bacteria, this has replaced the need for any diammonium phosphate or similar.

“Putting it into the ground removes some of the variables,” says Mr Freestone. “Spraying a live mix on to the surface can be a bit hit and miss – the microbes in the brew can be affected by UV light and temperature fluctuations.”

Last year’s terrible autumn and winter weather meant he had to fallow 170ha of heavy clay land, having been unable to drill it in time. Concerned about the impact on soil structure and in line with his policy of keeping living cover on the fields at all times, he opted to establish a 16-species cover crop.

“The multi-species mix covered all the bases and gave us the option to graze it with the sheep,” he says. “At a seed cost of £70/ha it was twice as much as we usually spend, but we will be able to cut the nitrogen back in the next wheat crop and not use any P.

“It has also been great for pollinators and beneficial insects – something that matters to us since we went insecticide-free.”

Some 30-40ha of herbal leys are also part of the diverse rotation at Overbury. In place for 3-4 years, they have helped with grassweed control and tend to be followed by peas, then wheat.

Soil organic matter levels have risen as the no-till system has evolved, and earthworm numbers have exploded. Manures and biosolids are used as straights and in composts, with the free-draining soils responding better and coping well with extreme weather events.

“Our sloping fields are far less susceptible to erosion,” he says. “However, the heavier land has been slower to respond and can still get tight and anaerobic in the winter, so there’s more work to be done with those soils.”

Oilseed rape has kept its place in the rotation as a much-needed break crop, but the area is down by 40% and drilling dates have come forward to avoid cabbage stem flea beetle.

Established with a companion crop of buckwheat, phacelia, berseem clover and vetch, it also receives poultry litter before it is double rolled.

“With poultry muck and our seed drench, the nutrition is all done at planting,” notes Jake Freestone. “The companion crop provides more soil cover and helps keep the pigeons off, as well as cycling nutrients and providing a rooting benefit.”

That means nitrogen rates have come right down – the crop used to get 220kg/ha, now it receives 150kg/ha in the spring. In addition, no autumn fungicide is planned and pre-emergence herbicides aren’t required.

Mr Freestone hasn’t seen the yield dip in winter crops that some associate with no-till, but highlights that there are more challenges with spring crops. “It is trickier to get it right in the spring and the fluctuations are greater.”

Taking third place in the Soil Farmer of the Year 2020, Dorset-based John Martin aims to grow one crop for the combine and one for the soil.

His philosophy of harvesting sunshine for six months to produce food and then for another six months to improve the soil is working well, with the family team intent on running a viable farm which also delivers for the environment. 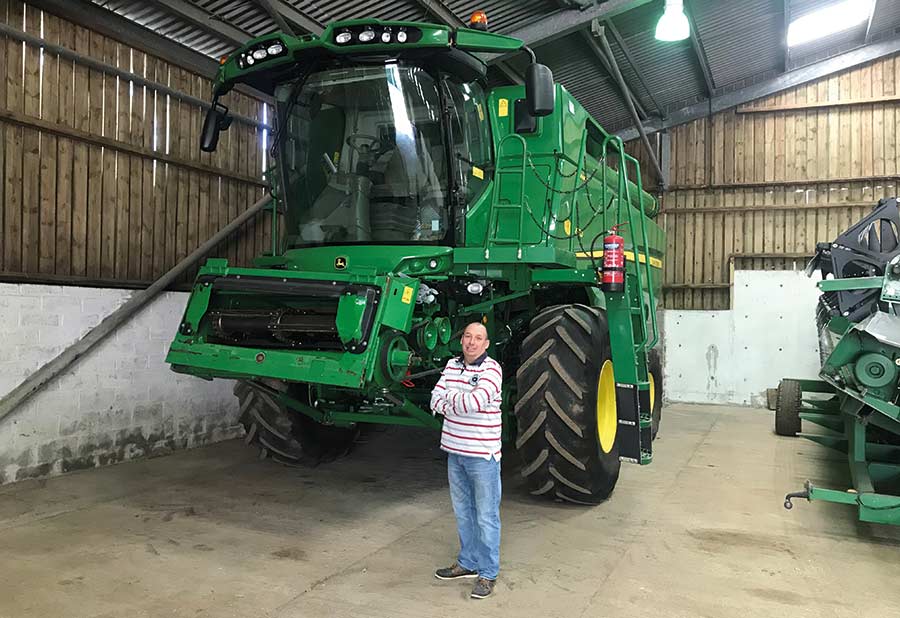 Using what he describes as a hybrid approach to soil management, involving chopped straw and cover crops, Mr Martin has put a focus on nutrient use efficiency, reflecting the farm’s location in a source protection zone one and a nitrate vulnerable zone, as well as its proximity to a pumping station.

As a result of his efforts, nitrogen use on spring barley has dropped to 120kg/ha, with further reductions planned, while the farm is having a P and K holiday this year. Soil biology is being encouraged, compaction has been minimised and input use is falling.

Aware of environmental concerns and with the help of cover crops, he has more than halved nitrate leaching losses. Ongoing investigations are now looking at how the timed release of captured nitrogen can benefit the following crop.

Mr Martin works closely with Wessex Water throughout the year to minimise the amount of residual nitrogen and prevent it from making its way into water supplies. He is also bringing biodiversity into the middle of his cropped fields with 8m flower and grass strips, as he sets out to eliminate insecticide use.

When he moved out of dairying 20 years ago, Mr Martin’s aim was to keep the chalky clay loam soils in good condition. He started by chopping and incorporating straw, seeing gradual improvements in the soil’s organic matter content, ability to retain water and resilience.

“We soon learned that what you do today will bring you a benefit in five years,” he says. “Putting something back into the soil is really important, so we’ve continued to do that.”

Building humus and raising the soil organic matter by 1-1.5% has helped with its ability to hold water, making it possible to produce consistent spring crops, even in dry years.

“Every 1% increase in organic matter gives us an extra 17mm of rain storage,” he says. “These soils are free-draining, but they will hold moisture if they are treated well.”

At this time of year, his flexible 6-8 year rotation, which spans 300ha at Milborne St Andrew near Blandford, consists of 100ha of winter wheat and 200ha of cover crops. Spring cropping includes spring barley, spring oats and peas, with spring barley sometimes being grown for two years in a row.

A cover crop mix of linseed, phacelia, buckwheat, sunflower and clover is used, costing about £25/ha, to make maximum use of the various species’ different root structures and growth habits, as well as to bring in diversity.

“The cover crops are there to provide something for everyone,” says Mr Martin. “We need the dense winter cover provided by the likes of phacelia and linseed to compete with grass weeds, as well as the nitrogen and phosphorous benefits that clover and buckwheat bring.

“They also help to keep the soil biology happy and provide the habitat diversity that pollinators need.”

Keen to eliminate insecticide use, earlier this year he established three 8m-wide flowering strips, bordered with tussocky grasses, running through a 20ha field. Representing 5% of the productive area, the hope is that they will bring beneficials into the fields and help with aphid and pest control.

“We’re doing it now to see if it works,” Mr Martin says. “It’s the sort of initiative that we expect ELMs [Environmental Land Management] to encourage, and with the loss of barley yellow dwarf virus control methods, we need to look at alternatives.”

As John Martin has peas with their inherent fertility benefit in the rotation, he has been establishing cover crops afterwards and then drilling winter wheat into them in mid-October as a trial on a small area of the field. The cover crop is then sprayed out in the spring.

While this practice has reduced nitrate leaching from 67kg N/ha/year down to 4kg/ha, it comes with a yield penalty of about 20%. “Last year I got it completely wrong and the yield penalty was much greater, so we’re doing a more diverse trial this year,” he says.

That trial is looking at both catch crops and companion crops, along with different methods of terminating them. It is also investigating whether there is an opportunity to reduce the amount of nitrogen applied in the spring.

“We know that there is a SMN [soil mineral nitrogen] reading of 125kg N/ha after peas, which will be half that by February. We are hoping to be able to recycle most of that nitrogen and make it available to the wheat, so bringing our growing costs down.”

Porous pots supplied and monitored by Wessex Water are in place, so that any differences in nitrate leaching can be measured.

Entries for next year’s Soil farmer of the Year will open on 5 December, World Soils Day. The competition aims to champion farmers who are putting soil health at the centre of their farm management, with the winners being announced at the Groundswell event. To find out more, visit www.farmcarbontoolkit.org.uk