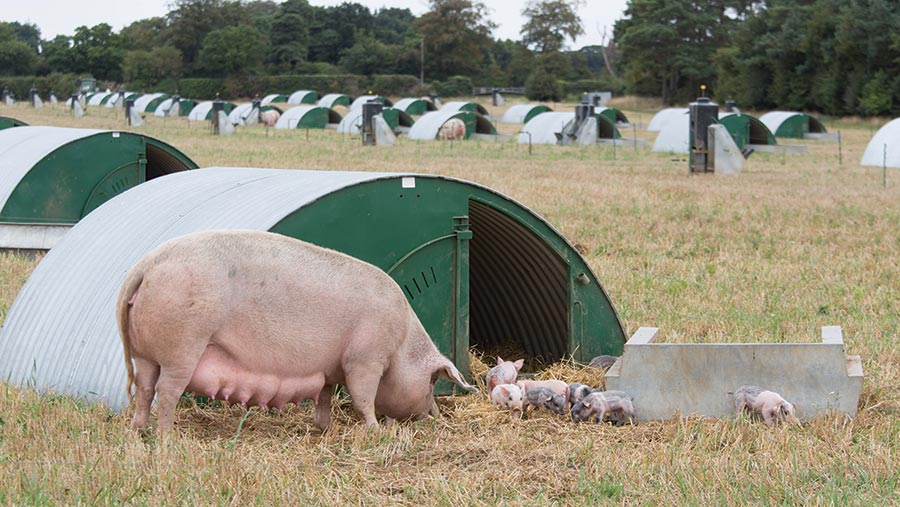 Outdoor pig production could be a profitable opportunity for arable farmers looking to widen their crop rotation and reduce chemical use, especially for weed control.

Integrating pigs into the arable rotation is also an effective way of enhancing soil health, provided a careful approach to site selection and ground cover are undertaken.

It can reduce soil issues including compaction, soil erosion and nitrogen leaching.

With an average outdoor breeding unit of 1,000 sows requiring 40ha, potential income can be very competitive when measured against other cropping incomes.

She explains some of the important considerations to help make the most of the potential of pigs in the rotation.

Careful site selection and manure management can ensure outdoor pig systems bring the many benefits to arable soils, lasting up to three years after pigs have gone.

However, poor choice of site and inadequate ground cover can risk soil poaching and surface run-off, which can be detrimental to soil structure and local water quality.

Ms Pearce explains how selecting an appropriate site and assessing local groundwater and surface risks are priorities when setting up a unit, in order to reduce run-off and optimise soil benefits.

Layouts should be carefully planned, with troughs, feeders and pig wallows specifically allocated to areas that suit.

Barriers such as buffer strips, hedgerows and trees can be established to reduce run-off and are also eligible for payments under environmental stewardship schemes.

Such measures can also boost biodiversity and are beneficial to insect populations.

Timing of set-up is also important, with a spring start better than an autumn start, as this allows the system to become fully established in dry conditions.

Ensuring adequate ground cover is established before pigs are brought on farm can reduce risks of poaching and compaction.

Richard Barnes, Kings and Frontier sales manager, explains how various options are available to effectively integrate the system on to farms, with payments on offer for the establishment of grass leys.

“Farmers can get payments to work the pig set-up into their system but it’s important they utilise the opportunities on offer from the ecological focus areas and countryside stewardship schemes,” he says.

Grass-legume mixes are particularly good, with creeping red fescue grasses great at binding soil together, while herb mixes are even better, due to their deep, penetrative root systems.

After pigs have been moved out, the planting of a cover crop can help retain nutrients and increase soil health, ready for the next cash crop the following season.

Pig manure is an excellent source of valuable nutrients and can provide more than adequate amounts of phosphorus and potassium and cut nitrogen fertiliser bills.

Mr Watchorn initially brought pigs on to Park Farm in 1994, and he now operates a breeding-to-finish unit with 600 commercial Rattlerow sows, where piglets and sows are reared outside.

Although pigs are not fully incorporated across the arable rotation, a maize crop grown for silage is planted every two years after the pigs are moved off land to extract excess nitrogen and phosphate nutrients from the soil.

He explains how maize is a good crop to grow following the pigs, as it effectively uses surplus nutrients from pig manure due to the crops large dry matter and yield, which reaches up to 50t/ha on the farm’s sandy glacial gravel soils.

Soil health has greatly improved across the farm as a result of the rotational use of straw-based farmyard manure.

Top soil quality and water retention has increased, with sugar beet yields doubling since the pigs were brought on the farm.

Mr Watchorn describes how the farrowing straw beds and manure are left on the ground after the pigs have been weaned and the beds are naturally worked into the soil by earthworm action, within five weeks, increasing soil drainage ability.

One potential issue with the system is the build-up of nutrient hotspots in fields where pens are located, but the use of variable rate fertiliser applications can be used in following crops to minimise this.

“The importance of site choice cannot be emphasised enough, as the system is easy to manage if carefully thought through before,” he says.

“Careful thought as to where you enter and leave a field is very important.

“Try to avoid having the gateway at the lowest point of the field to reduce run-off,” adds Mr Watchorn.

Farrow paddocks are also sub-soiled to keep them dry, but it’s important to be proactive with such cultivations.

These techniques, which reduce surface run-off, were particularly important this year, after the farm received 80% of its annual rainfall in just three months.

“We feed the pigs on straw feed mats outside of the arcs, which allows them to eat for three to four hours per day, which keeps them content throughout the day,” he explains.

All speakers were attending an AHDB pigs in the arable rotation event held last month.