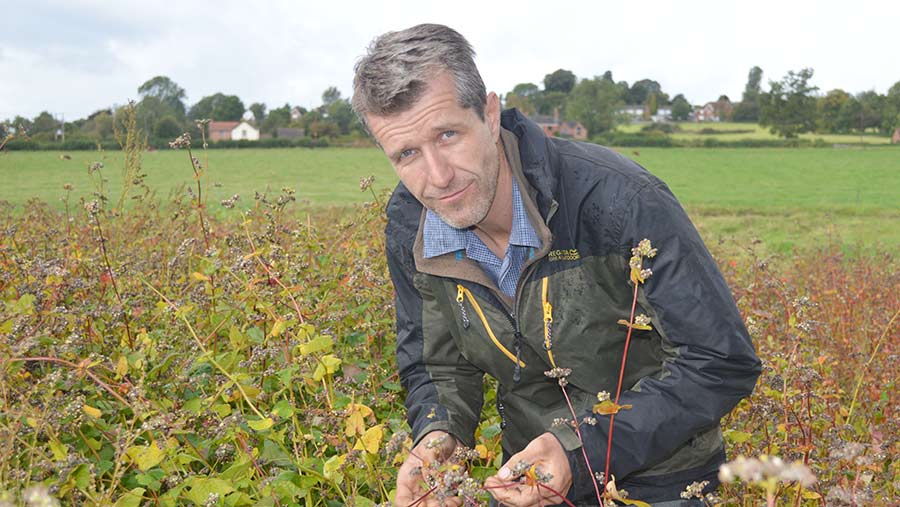 Shropshire organic grower Mark Lea was concerned that docks might become a nuisance weed on his farm and, as he could not reach for a chemical can, he turned to sheep as a solution.

His 100-strong flock of ewes nibble away at docks and also have a liking for chickweed and charlock, and so help get his one-year grass leys into good shape without the use of any herbicides.

Weeds are Mr Lea’s biggest headache, well ahead of diseases and pests, and so getting docks under control is key to growing lucrative organic wheat, oat and pea crops.

He is aiming for a yield 5t/ha from his milling winter wheats. With no sprays or fertilisers used and with the grain selling at twice the price of non-organic wheat, this makes for a profitable crop.

“At a wheat yield of 5t/ha and selling at £320/t, it is very difficult for non-organic farmers to compete with this,” he tells Farmers Weekly.

His one-year leys grazed by sheep and cattle are critical to building fertility and fixing nitrogen for the cash crops he grows on his essentially arable enterprise at Green Acres Farm, Kemberton, just east of Telford. 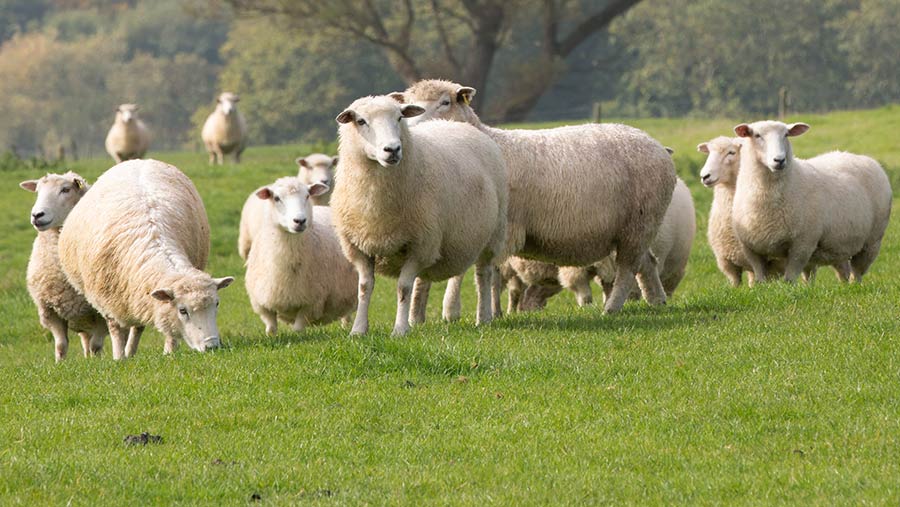 Average wheat yields in his five-year crop rotation are 4.4t/ha, and his prices have not seen the falls faced by non-organic wheat, as he has just sold feed wheat from harvest 2019 at £260/t.

“We are making more profit as an organic farm as it opens up a number of doors to adding value for our products,” he adds.

Mr Lea switched to organic farming in 2000 as it was proving difficult to survive as a relatively small arable farm of 223ha. His move was cushioned by the advent of environmental schemes which he was able to join.

*The farm is also experimenting with buckwheat and fodder beet.

The result is that his light to medium clay loam soils have seen a rise in organic matter to 4.5-5% from a much lower figure previously, with nitrogen-fixing clover and peas helping to boost crop nutrition.

The one-year ley is key to fertility building. Red clover can fix 250kg/ha of nitrogen in a season which is released slowly over the next two years or so, to benefit his five-year wheat-oats-peas-oats-grass rotation.

He is diversifying his long-term ley mixtures but is not convinced he would get the benefit of any deep rooting species in his one-year ley to justify the extra seed costs.

Winter wheat is established by applying green compost on an old ley, ploughing, cultivating and then drilling in mid to late October. The farm processes 5,000t of green compost every year from local garden waste. It is applied to each field at least once every five years.

Mr Lea considers ploughing to be the best method of establishing cereal crops in an organic situation, but he is trying new techniques to reduce the amount of carbon being released by ploughing. 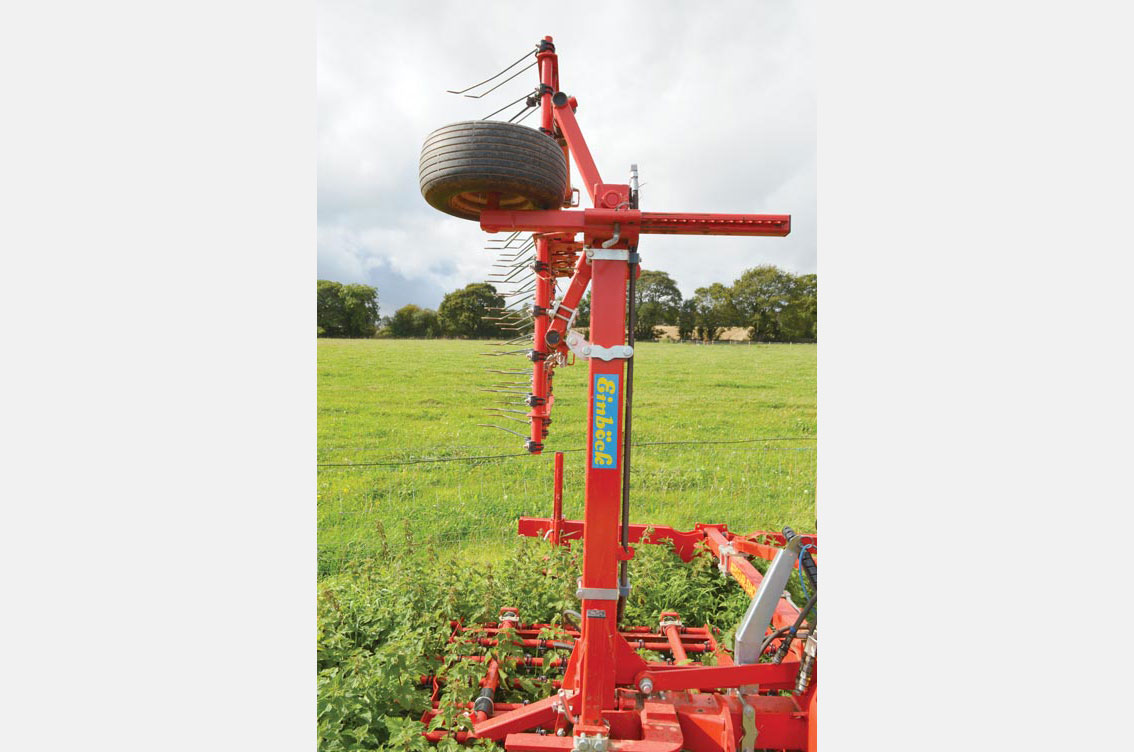 The Einbock weeder is central to weed control

Minimum cultivations have been tried, but the grass ley would have to broken up much earlier to give time to destroy the ley and form a wheat seed-bed, and the farm would miss out on two or three months of valuable autumn grazing.

Weed control is currently reliant on a spring-tined Einbock weeder, often used in November and then again in March, which pulls out the weeds and leaves the drilled wheat intact.

A Garford Robocrop weeder was tried but Mr Lea was finding plenty of weeds within the rows and so he moved to narrow 150mm rows and using the Einbock for as long as possible in the spring.

This is where livestock come in. A 100-strong New Zealand Romney flock was brought in two years ago, and the sheep are proving ideal in a low-input forage system with no concentrates fed.

The sheep go straight on to cereal stubbles before moving on to newly established leys in the autumn, to eat docks and other troublesome weeds and prepare the grassland for the Hereford suckler herd in the spring.

The sheep have been a success at helping weed control. The ewes are lambing at a relatively low 160% but there is no consumption of expensive concentrates and the flock size is now set to rise to 150.

“The sheep have been very important in terms of weed control and establishing the leys,” he says.

The sheep leave the grass leys in a good condition for the 30-strong spring-calving Hereford suckler herd to graze in the spring and summer.

The Hereford fattening cattle are sold at 21 months to a specific beef finisher at an organic premium, but the Romneys are sold without a premium due to the lack of slaughterhouses in the area. 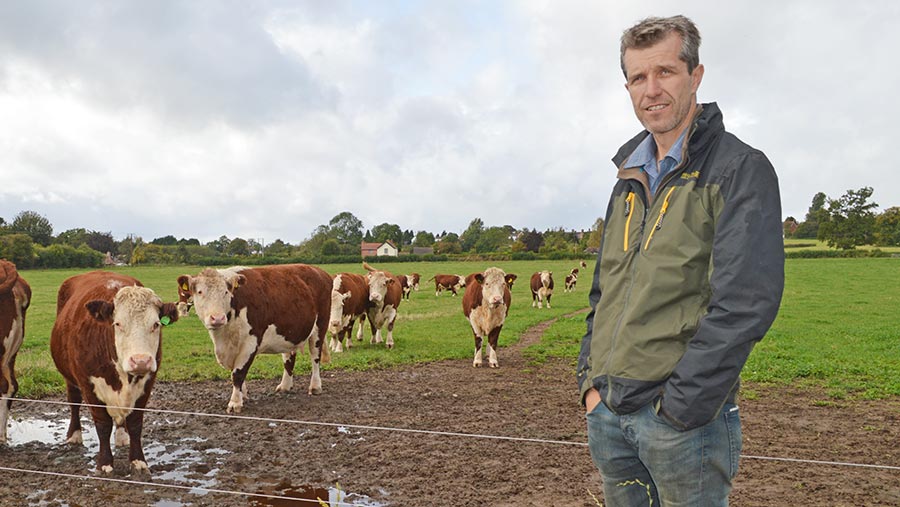 He admits that the grass leys give a poor profit margin, but he sees them as essential to building fertility to deliver four good cropping years.

Some of the wheat he grows come from mixed population of 190 crosses of 20 different varieties to give increased resilience to pests, disease and climatic risk, but he is now looking at a mix of varieties of at least 10, including varieties like Zyatt and Crusoe.

“It’s perfectly possible to produce 12-13% protein wheat and there is a strong  market for this organic wheat,” he says.

Mr Lea looks for wheats which shows good height, can scavenge for nutrients and compete well with weeds, rather than modern varieties which focus on out-and-out yield.

His spring oats are largely of the variety Firth and give an average yield of  4.2t/ha, and fit well into an organic system as they are very reliable performers.

His final crop is combine peas as Mr Lea is eager to grow a grain legume, which is not as good at fixing nitrogen as clover, but does give further cropping diversity.

“Clover is much better than peas at fixing nitrogen, but we were keen to introduce a grain legume and these peas find a ready human consumption market,” he says.

In addition, he is experimenting with more diverse crops such as buckwheat, which is cut in early October for the milling industry, and also fodder beet.

Furthermore, cover crops are being grown before the spring oats and peas. The mixture used contains largely fodder rape and stubble turnips with phacelia and buckwheat often added, which give good sheep feed through the autumn and winter months.