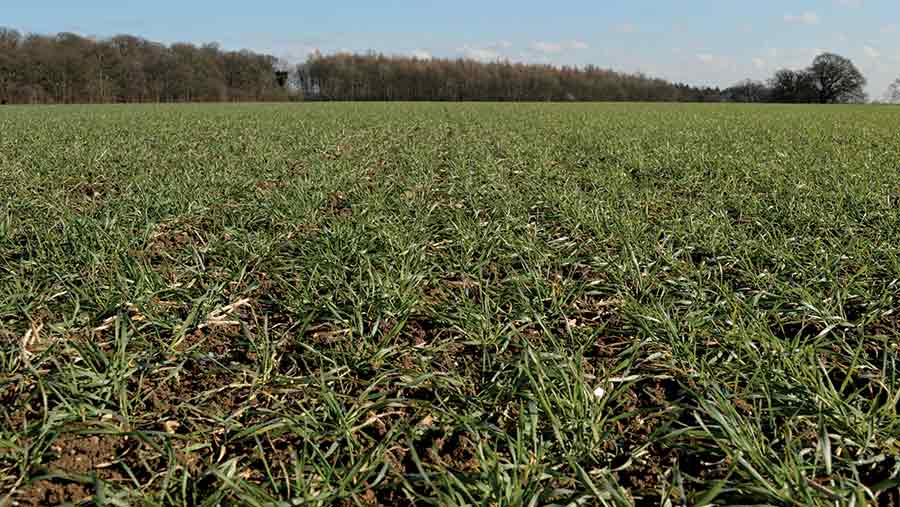 Hertfordshire milling wheat grower Andrew Watts is set to increase his area of spring wheat eightfold after only drilling three-quarters of his winter wheat in last year’s wet autumn.

Although many have fared much worse and have nothing drilled, Mr Watts says the first wheats on heavy land were his first casualties, and he only drilled 723ha of winter wheat, rather than a planned 980ha.

“We asked should we fallow, but we had prepared the land, and so made the decision that if we could get on by mid-April, we would go with it,” he says.

Mr Watts, farm manager of 2,500ha of arable land at Wallington Farms, just north of Hertford, is therefore planning to increase his area of spring wheat from 50ha to 400ha to make up for the fall in his winter wheat, winter barley and oilseed rape areas.

Even though he will be growing a bigger overall area of milling wheat, he is planning for a harvest of about 8,000t, instead of the 9,200t in a more “normal” year.

Luckily, he saved seed from the 50ha of spring wheat variety Mulika he grew last season, as spring wheat seed is virtually sold out after a surge in demand.

James Webster, senior analyst at the AHDB, says its Early Bird planting survey estimated the overall wheat crop area will be down 17% at 1.5m hectares this season due to the wet autumn, and of that, he expects 200,000ha will be spring wheat.

With the much smaller crop in the ground, the wheat harvest could be as low as 11m tonnes, but this in unlikely to result in a rise in prices, as the smaller crop could suck in wheat from Germany, which is currently at “import parity” price-wise.

The domestic milling industry uses about 5m tonnes of wheat annually, with 83% home-grown, but imports could rapidly increase with a lower 2020 domestic harvest.

George Mason, senior executive at milling group Heygates, says the national wheat crop could easily be 2m tonnes below that 11m tonne figure at 9m tonnes, and the milling industry – with many of its new, modern mills in central England – may have to use imports transported from the ports.

“We will have no choice but to import, but it will be an expensive business, as we really want to use home-grown wheat,” he says.

All those mentioned were speakers at an AHDB milling wheat conference held late last week.