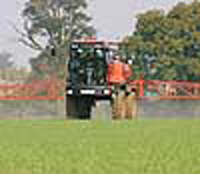 Autumn herbicides continue to be a priority for Farmers Weekly’s Crop Watch agronomists, with oilseed rape management and volunteer bean control also on the agenda.

It was best to wait until the crop reached the three leaf stage, when using chlorotoluron mixtures on barley, he said. “But, by the time backward part of the crop gets there, weeds in forward areas may be getting too big.”

HL Hutchinson agronomist, James Boswell from Kent said stale seed-beds had not worked in many cases and grassweed pressure was high. Most fields had received a pre-emergence herbicide, but due to very dry and warm soils, achieving good grassweed control had been difficult, particularly in barley, he said.

“The most reliable approach is to use pre-emergence or early post-emergence applications – this should be a priority as contact grassweed products are very limited.”

Oilseed rape crops were looking good in most areas and fungicides with growth regulating properties were being applied to forward crops. “I would apply Folicur (tebuconazole) or Caramba (metconazole),” said AICC agronomist, Andrew Riddell from East Lothian.

Light leaf spot protection should also be tackled soon, he added. “I will be favouring Proline (prothioconazole) or Punch C (carbendazin + flusilazole) applied at three-quarters rate.”

In the east, UAP agronomist, Will Foss from Suffolk was waiting for volunteer beans to reach two to three leaves before applying the one remaining mecoprop-based product with autumn use on the label. “All other CMPP-based products are no longer registered.”

Alternatives were limited to low-rate clopyralid or autumn sulfonylureas, he said. “However, sulfonylurea use in the autumn impacts on subsequent applications – particularly where Atlantis or Pacifica are planned.”

Click below for the full report from each region: