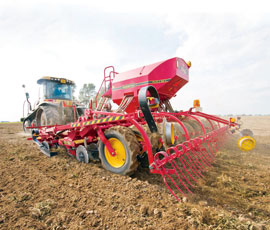 The recent prolonged cold period has knocked back forward crops, according to this week’s Crop Watch agronomists.

“Whether it was prolonged enough to reduce disease pressure significantly we’ll have to wait and see,” says Tod Hunnisett, independent agronomist working in Sussex and Hampshire.

“Oilseed rape crops have shrunk back nicely, which is far cheaper than triazole fungicides. Although when it warms up we’ll be looking at stem extension fungicides – that’s when I think the growth regulatory effect is worthwhile,” he adds.

Frost damage may cause problems when identifying light leaf spot in oilseed rape, says Philip Vickers of Farmacy, Lincolnshire. “At first it can appear very similar,” he says. “With the current high value of oilseed rape, and if the variety is susceptible to the disease, I think we will be well rewarded for treating where infections are above 15%.”

Disease in cereals has been a problem, with high levels of brown and yellow rust found in crops before the frost.

“The frost has slowed development. With the most popular varieties being susceptible, and high levels of spores present, most wheat crops will be receiving a rust active T0 in early to mid-March, depending on weather,” he says.

The cold weather has not only checked oilseed rape crops, but also charlock and runch, according to David Martindale of Arable Alliance in the north.

“Hopefully a couple of new herbicides will gain registration for next year which will give us a better chance of controlling charlock in the future,” he says.

In the south, Mr Hunnisett is now starting to see the results of autumn Atlantis (iodosulfuron + mesosulfuron) applications. Remaining blackgrass needs to assessed to find out if it’s due to poor efficacy or resistance.

“If it’s the latter it signals an even greater need for comprehensive strategies to deal with the problem,” he says.

Many growers are keen to apply nitrogen, but where crops are large applications could be delayed, says Mr Martindale. “The first dose could also be reduced.

“Some thick and forward first wheats could definitely miss out on the early nitrogen timing to minimise the risk of lodging,” he says.

Neil Donkin from Countrywide Farmers has seen spring drilling start in the west, with spring beans and wheat going in with the arrival of frost.

“There are few options for post-emergence weed control in beans, so a pre-emergence treatment is essential,” says Mr Donkin.

“Pre-emergence spraying should be considered in spring barley also, particularly if meadow grass is likely to be a problem,” he adds.

Although soils are currently allowing travel for spring drilling, due to low rainfall in the south, Mr Hunnisett worries that that could change. “Nature has an uncanny way of balancing itself out. We could be in for a very wet spring this year,” he says.