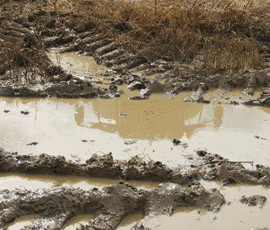 As the rain continues across the UK this week, field work remains at a standstill for our Crop Watch agronomists, but pressure on slug and weed control programmes are increased.

Fine and well consolidated seed-beds are becoming increasingly difficult to achieve in places, says Yorkshire agronomist David Martindale who reports some growers have been “mauling in” wheat.

“It’s a real mixed bag, ranging from those who have barely begun drilling cereals, to those who have progressed well and will soon be finished,” he says. “Soil type, quantity of rainfall and drainage are the main reasons for the differences.”

Mr Martindale also points out that some growers have abandoned the possibility of sowing winter crops in some fields and have ordered spring cereal seed already.

The recent relentless rainfall, combined with the poor quality seed-beds, has maintained the huge slug pressure for most parts this week and concerns grow about their control. Many growers would now be close to reaching their 210g/ha of metaldehyde allowed between August and December already.

“With the high use of slug pellets, combined with high levels of rainfall, I fear we will be hearing of pollution issues as time goes on. All we can so is urge that the stewardship guidelines are adhered to and that slug pellets are used judiciously.”
Tod Hunnisett, AICC agronomist

“The wheat sown so far has been quite slow to emerge and the wet weather has re-activated the slugs. I have seen some severe surface grazing,” says Tod Hunnisett, AICC agronomist in Hampshire and Sussex.

“With the high use of slug pellets, combined with high levels of rainfall, I fear we will be hearing of pollution issues as time goes on. All we can so is urge that the stewardship guidelines are adhered to and that slug pellets are used judiciously,” he adds.

Philip Vickers also reminds growers of the alternative pellet that will have less impact on the environment. “Ferric phosphate is proving very effective so far this season and is a responsible choice to replace metaldehyde,” he says.

Also in Lincolnshire, Mr Vickers is weighing up his herbicide options on a field-by-field basis dependent on drilling depth and slug pressure.

“Where seed depth has been compromised or slugs are abundant, the first herbicide will have to be early post-emergence with the addition of an insecticide.

“Although this will compromise blackgrass control crop safety is paramount, but where we can achieve good seed-beds and a good seed depth, a pre-emergence will be used,” explains Mr Vickers.

Flufenacet will be used as the backbone of his herbicide programmes, but he underlines the importance of using a mixture of active ingredients. “Flupyrsulfuron-methyl (FPU) will be a useful addition in either a pre- or post emergence in wheat, or solely a pre-emergence in barley.

“Mesosulfuron + iodosulfuron can still be used in the sequence provided blackgrass has not emerged and FPU is also very active on cranesbill.

“I am a little nervous of using pendimethalin pre-emergence with the inclement weather. Tri-allate, diflufenican and prosulfocarb will also have a important role to play in addition to the flufenacet, and most programmes will be applied in two stages with at least three actives,” he concludes.

Down in Devon, Matford Arable’s Neil Potts has seen crops emerging slowly, particularly where seed-bed fertiliser wasn’t applied. “Any crop without that application will be receiving 30-40kg/ha now as a matter of urgency in order to try and accelerate the establishment process,” he says.

“Seed availability also continues to be an issue, so I would urge anyone who thinks they might have a seed requirement this autumn, but has not ordered any, to do so urgently or risk not getting what you want,” he adds.

Read the full regional reports on our Crop Watch blog.

For more help and advice on herbicide options this autumn see our Herbicide Special.