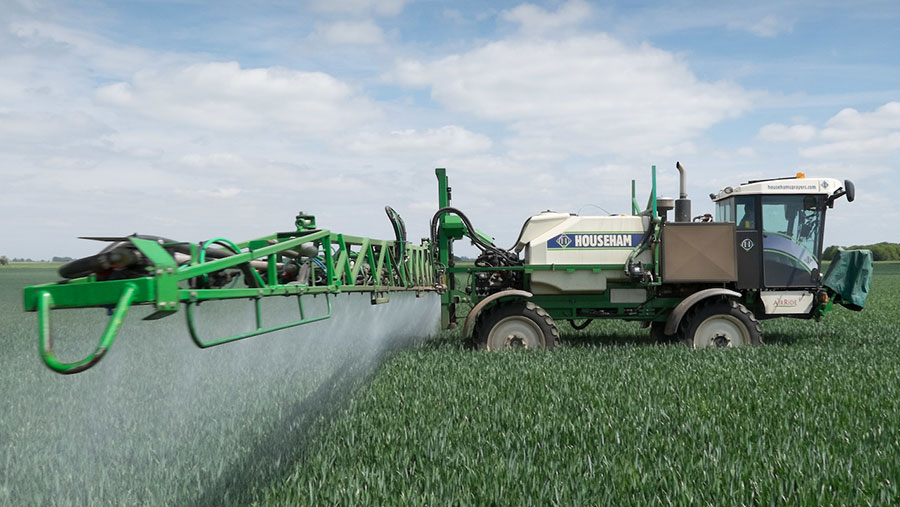 Recent warm weather allowed most growers to catch up but our agronomists urge proactivity with T2 fungicide applications in winter wheat, which are suffering heavy burdens of septoria.

These should be applied at the right time rather than observe the usual 21-day gap between T1 and T2 if disease is going to be successfully managed.

The lack of weeds seen so far in some spring cereals could point to a late flush after many herbicides have already passed their cut-off point, making control difficult.

So far, 2018 has turned into the craziest season I can remember.

Crops are all over the place and all the spring cereals have been drilled in the second half of April and into early May.

Winter barley crops that had delayed nitrogen applications are not looking great, compared with those that received some on time.

Many barley crops missed their T0 altogether and ended up having a robust and late T1.

These crops are now at awn emergence and the disease control is looking fairly satisfactory. T2 applications have now started.

Winter wheat crops have suffered the same fate, with some missing their T0’s and those on the heavier ground receiving late T1 applications.

The disease situation in these crops is not so great.

There are heavy burdens of septoria in crops that have missed applications or suffered delays. T2 applications are going to need to be made on time even if the period between T1 and T2 is a shorter than normal.

Some big guns are going to be needed at T2 to bring septoria back under control, particularly if the showery weather continues.

Only LG Sundance is looking clean at the moment, with later-drilled Graham not far behind.

Early drilled Graham is showing worryingly high levels of septoria and Skyfall, which is usually quite a clean variety, is brown with septoria on the lower leaves.

On the plus side, many wheat crops that were looking shocking six weeks ago have responded well to nitrogen applications and are now looking like they have some potential so long as the disease can be checked.

Spring barley crops are going to be difficult to manage this year due to the lateness of drilling.

They will undoubtedly come into ear at much the same time as usual, which means they are going to grow very quickly, giving us much smaller windows for top-dressing and spray inputs.

I would urge growers to not waste a single opportunity to get applications on to the spring barley crop as a small weather delay could prove very costly.

With spring cereals, maize and beet crops all going in the ground at the same time the agronomic workload is looking a bit daunting at present.

I cannot describe how good it has been to arrive on a farm and hear the phrase “I am all up to date”.

Most crops have dramatically improved in the past two weeks as they have responded to fertiliser applications and the warmer weather.

Flag leaves are beginning to emerge on winter wheat crops. Many have received a more robust T1 fungicide mix after missing T0.

Septoria tritici is the disease of concern and is easy to find on leaf four where no T0 fungicide was applied.

With the all-important T2 fungicide timing approaching there will be different fungicide choices and doses depending on the variety, drilling date and what did or did not happen at T0 or T1 in relation to Septoria tritici control.

The most robust T2 mixes will be for early sown crops which did not receive a T0 fungicide and their T1 application was delayed.

Oilseed rape crops are in full flower and appear to be quickly setting pods. Pod set in most cases looks good so far.

Sclerotinia fungicides have been applied and pest pressure has been confined to a small number of seed weevil hotspots.

Winter barley crops are mostly at the awns emerging stage.  T2 fungicides are being applied which will include chlorothalonil for ramularia control.

Where T1 fungicides were delayed in barley the rhynchosporium and net blotch levels are higher up the canopy than ideal. The T2 fungicide will prevent further spread of these diseases up the canopy while also providing brown rust control.

Spring barley crops have a huge variation in growth. Those sown before Easter have suffered the most from poor establishment due the heavy rains that followed drilling, but they have begun to improve in the past two weeks.

T1 fungicides will soon be ready to be applied to these crops with herbicides often added at the same time.

Winter beans are beginning to flower a fungicide mix to protect against chocolate spot should soon be applied.

Early sown spring beans look excellent at the 4-5 leaf pair stage while later-sown crops are emerging quickly but have required an insecticide after heavy attacks by the pea and bean weevil.

T1 fungicides may have only been applied to these crops seven to 10 days ago, and the temptation will be to keep to the standard 21-day interval between T1 and T2.

As I write this, I can hear heavy rain at the window, and with active Septoria tritici sitting in the base of some crops my mind turns to rain splash moving spores in the base of the crop up the plant.

With the flag leaf contributing to more than 40% of yield, it is even more important than usual to protect it at the correct timing.

SDHI chemistry in the forms of bixafen or fluxapyroxad will be employed at T2, mixed with either epoxiconazole or prothioconazole, with the latter forming a good base to control fusarium later on.

A multisite active ingredient such as chlorothalonil or folpet may also be added on susceptible varieties, or if wetter weather is forecast.

Blackgrass control in winter wheat in the form of mesosulfuron-methyl + iodosulfuron-methyl went on later than the ideal timing in places, controlling smaller plants, but allowing larger, well-tillered blackgrass to grow away to produce seed heads.

To top this off, I’m now finding new blackgrass emerging out of cracks in the ground. Later emerging broad-leaved weeds are also possibly going to cause problems as crops are now nearing the cut-off points for most herbicide products, with some products such as mecoprop-P having already passed its cut off point.

In spring crops, the lack of weeds in some places is concerning, pointing to a later flush, especially as it is raining. These may prove tricky to control, particularly in spring barley, sugar beet and peas where intervals between broad-leaved weed control and graminicides need to be observed.

Unreserved credit must go to the long-suffering operators: “I’m sorry sweetheart – I’d love to come to our wedding/grandad’s 80th birthday celebrations/auntie’s funeral but it looks like the weather’s going to be nice and I have about a million acres to drill/spray/fertilise .”

Finally, people are beginning to feel they are catching up.

Late-drilled spring crops have gone into warm, moist soils and have shot through the ground – some coming through so quickly they’ve missed their pre-em slot.

Last nitrogen doses have gone on to wheat and at last they have a decent bit of colour.

Because of the wet early conditions I went in pretty heavy with early fungicide doses; if it stays dry from now on it will give me the opportunity to cut back a bit.

Plough still has use

Spring grassweed sprays that went on in the early hot weather seem to have worked superbly – which is encouraging because it suggests previous year’s attempts that have been unsuccessful have only not worked because of the weather and not because of a resistant population.

Ear wash tickets have started to be recommended for winter barley. That’s always a lovely feeling because it signals the beginning of the end of the silly season.

Oilseed rape is coming to the end of flowering and once again it astonishes me with its ability to compensate in thin or backward areas.

Maize drilling is taking place, a lot of it going into overwintered soils that looked horrendous before some magician came along with a funny thing called a plough and transformed them into workable ground.

Call me old-fashioned if you like, but in a season like this we all have to think outside the box.