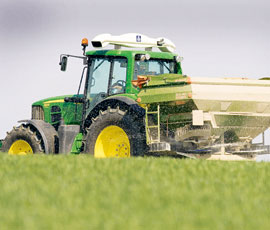 Managing this season’s lodging risk is at the top of our Crop Watch agronomists’ agenda this week as they plan their fertiliser timings and growth regulator programmes for forward crops.

In the south, Nick Brown of ProCam says the unusually dry winter, following on from a dry year last year, is going to pose many headaches as far as decision making is concerned. “The first of these will be fertiliser timing.

“Winter barley, we know, cannot compensate for a shortage of tillers in the way that wheat can, and as a second cereal, will not have access to large reserves of soil nitrogen. It, therefore, needs fertilising as per a normal year.

In contrast, first wheats on heavy land look very thick and clearly have access to plenty of N at the moment. “These will need starving until April if we are to avoid excessive lodging risks.”

Agrii’s Will Foss adds: “If soils dry out over the next couple of weeks, top dressing nitrogen fertiliser will be the priority. Careful plant growth regulator management of large cereal crop canopies will be needed, with robust split applications at T0 and T1 in the highest risk situations.”

In the north, AICC agronomist Patrick Stephenson says that sulphur needs to be applied early to get the benefit in this growing year. Each crop should be assessed on its merits and don’t be fooled by the dry spring weather over the last three years. Large, early applications of nitrogen will increase lodging risk and produce ideal disease conditions.

However, he adds that growth regulators could be vital this year and with possible chlormequat shortages, alternative strategies should be considered.

In oilseed rape, Mr Foss says canopies have generally shrunk, but lodging risk is likely to be higher this year, necessitating a robust PGR fungicide program. “Metconazole-based fungicides will play an important part in this strategy, with first treatments during stem extension to maximise the stem shortening and root development benefits.”

With cereals, Matford Arable’s Neil Potts says the cold snap in February seems to have slowed active foliar disease in cereals. “Plans for T0 remain robust and assume that rust and mildew will be very active again by leaf four emergence.”

However, Mr Brown believes the rust risk in wheat is not necessarily any higher than the last two seasons. “I am not suggesting complacency, just that a conventional T0 of a triazole/chlorothalonil mix applied mid March will be all that is required.”

For barley, Mr Potts says brown rust, mildew, net blotch and rhynchosporium are all in evidence in most crops. “If ever there was a year when winter barley was going to benefit from a T0/T1 application, this is this year.”

Winter oats are again looking very forward in most instances and crown rust can now be found in many crops. “If not treated effectively early in the season, this disease could come back to haunt us,” says Mr Potts.

• Read more from the writers on our Crop Watch blog.