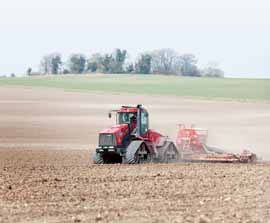 Yellow rust is creeping into winter wheat crops and septoria lesions are appearing on lower leaves, according to our Crop Watch agronomists.

“While septoria remains the dominant disease, yellow rust is widespread on Oakley and Robigus, but varieties like Viscount and Solstice are also high risk,” warns Prime Agriculture’s Norfolk agronomist, Marion Self.

T0 fungicide sprays and early plant growth regulator (PGR) applications have begun on early September-sown wheats that have reached the beginning of stem extension, she says.

Later-drilled crops at high risk from yellow rust, according to location and disease resistance, should also be protected from this disease, she notes, even if this means adjusting the traditional T0 timing – usually three weeks from T1.

She believes the early occurrence of yellow rust this season will encourage more use of strobulurins at T1, especially if followed by new SDHI fungicide chemistry at flag leaf.

“A low rate of proquinazid will be included to tackle mildew problems,” he says. “Otherwise, most crops will receive a low-rate triazole, with or without chlorothalonil, depending on the severity of the septoria.”

AICC agronomist Tod Hunnisett, from Hampshire/West Sussex, says wheats are waking up and quite a few crops are at GS30, although he hasn’t yet seen any at GS31, so he’s not rushing in with PGRs and T0 sprays.

“I’m recommending robust sprays at T0 and T1, keeping triazole rates relatively high, with the opportunity of cutting back later should the season allow,” he says.

For winter oilseed rape crops, the next task for his growers will be a stem extension/early yellow bud fungicide.

In Berwickshire, winter barley is starting to green up and manganese deficient areas or parts of fields that have suffered with frost are showing up, notes David Cairns from McCreath Simpson and Prentice.

“We’re encouraging growers to apply manganese and a tidy-up fungicide based on a triazole/morpholine mix, with or without cyprodinil,” he says.

Wheat crops are mostly at early tiller stage and a while off the T0 fungicide timing, so the main focus is completing weed control left from the autumn on backward crops.

“Treatments are being based on Picona (pendimethalin + picolinafen) and Lexus (flupyrsulfuron-methyl) combinations and any broad-leaved weeds that emerge later will be dealt with at later timings,” says Mr Cairns.

Planning for this year’s crop is well underway, but fertiliser allocation is concentrating the mind, he adds, especially where the top-up costs are considerably different to that purchased already.

Finally, widespread chitting is being carried out. “Hopefully, soil conditions will allow the full benefit of this to be achieved when it comes to planting, which has started in a few areas, with most going under fleece.”