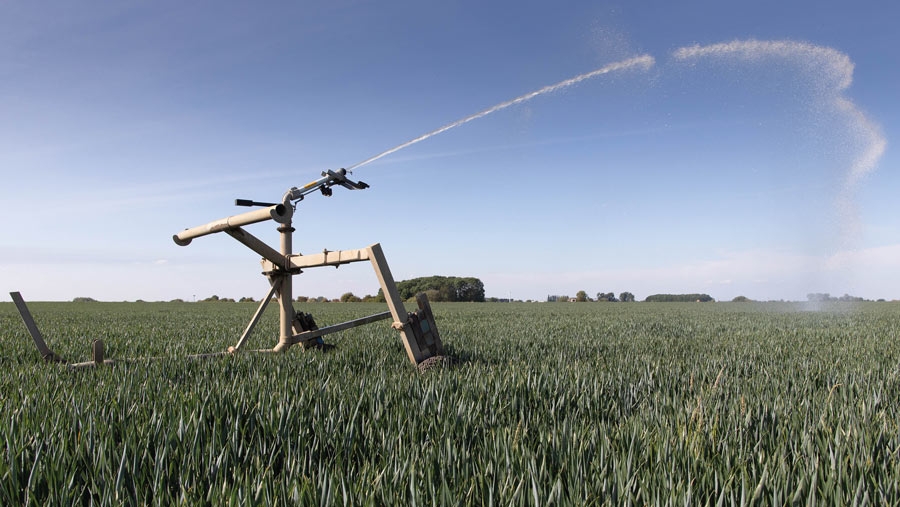 This season has seen the perfect storm for yellow rust, with spray misses in some varieties now dead, while the very dry conditions have kept septoria at bay.

However, growers are being warned against easing back on septoria control at the T2 spray in the current dry conditions, with memories of how last year’s June rain caught some out.

Blackgrass heads are visible above crops and dense patches are being earmarked for spraying off with glyphosate, to reduce its spread with the combine during harvest.

But the main concern is the lack of rain, with crops struggling, especially those on light land or with poor root systems.

They say a drop in May brings corn and hay. Well, we’ve finally had some rain in Cumbria over the past fortnight, but the damage is already done in some crops. Certain winter wheats and barleys (especially those late sown last autumn) are especially thin after dropping tillers during an exceptionally dry April and May.

T2s have been applied over the past week on winter wheat crops and although it is tempting on poorer crops to stop applying inputs after the drought conditions over the past two months, it is important to note that T2 is the most important fungicide on wheat, as the top two leaves contribute 65% to total yield, and additionally the recent rains and warm weather have increased disease pressure significantly.

Cereals aren’t the only thing taking a hit from the dry conditions. Grassland on light soils has struggled over the past month.

Many farms have taken first cut over the past two weeks in Cumbria and although in some situations there has been a lack of bulk, waiting is not always an option as it is crucial to take the grass before heading when aiming for high quality and digestibility in the silage.

Maize making progress
Maize is now nicely around the 4-5 leaf stage and has pushed up through the plastic where grown under film.

The dry conditions have meant pre-emergence herbicide efficacy has been poor, so post-emergence sprays will be necessary in some crops as maize is very uncompetitive in the early stages.

It is advisable to go earlier rather than later with the post-emergence spray, as smaller weeds can be controlled with a lower rate of herbicide, reducing the stress on the crop, which is especially important in the current hot weather.

Spring cereals have been slow to emerge but the recent rain have given them a boost and they are now moving quickly through the growth stages.

Weed emergence has been slow and every field is at a different stage, so field-by-field monitoring and timing of inputs (especially herbicides) is crucial this spring.

Winter wheat is now widely showing ears so T2 spraying is well under way. I say widely, because there are still many late February drilled fields yet to hit growth stage 31 and I’m wondering whether a lack of vernalisation and the hard dry may yet produce only silage.

Yellow rust and septoria are easy to find despite the equatorial conditions, so clearly the heavy dews are keeping the dream alive in the base of these crops.

Social media pundits are already proclaiming 2020 to be a “low disease year”, but have predictably short memories. We won’t know for a few weeks yet if it were such.

Be warned, I can still hear the anguished cries echoing from those growers bitterly regretting a “cheap and cheerful” tebuconazole + chlorothalonil mix (RIP) as their T2 choice last May as a soaking wet June then materialised.

Judge each field on its merits, always trust your gut and assume nothing.

Spring wheats and barley crops are now widely at the T1 stage and some barleys are already at T2 with ears fully emerged.

But as with winter wheat, there are many fields which have done little as they languish in the arid conditions, although the wild oats who share their beds seem to be finding moisture as they start to emerge.

Spring cereal fields outnumber winter cereal fields 10:1 up here – with the imminent demise of OSR and our options limited, is this the new normal? Peas and beans are still getting hammered by weevils.

Struggling sugar beet
Sugar beet is struggling in snuff-dry fields, with plants within metres of one another ranging in size from just emerging up to 10 leaves. Weed control is a challenge.

Myzus persicae (peach potato aphid) nymphs have hit threshold in most areas now, the population marching west to east across the county. The removal of Biscaya (thiacloprid) will be a big loss to beet growers going forward – particularly with its safety profile to ladybird larvae, ladybirds and hoverflies. I’ll just leave that there, then.

A constant run of Hutton periods means blight programmes are imminent and indeed under way. 2020: the season that just keeps giving.

In any situation there are only two decisions to be made:

It’s a poor sod who can’t get either of them.

Our wheats have been racing through their growth stages, going from growth stage 32 to 39 in only 14 days.

As we start on our T2s, the boots are already swelling on some crops and it won’t be long before ears begin to make their appearance.

Even with flag leaves fully out, we’re not rushing into spraying. The dry weather has held septoria back nicely, the strobilurins we included in all our T1s have done a good job on rusts, and we are comfortably within our 21-day T1-T2 interval.

Unlike those who didn’t prioritise yellow rust early enough and are seeing it widely – and, very worryingly, on previously strong varieties like Siskin – most of our crops are encouragingly clean.

With so much of the disease about, we certainly won’t be taking any chances here at T2.

And as temperatures increase, protecting ourselves against the brown rust so many of today’s varieties are so susceptible to will be as much of a priority. And, knowing how rapidly early summer rain can bring it on, we shan’t be forgetting septoria either.

This underlines the value of planning our T2s around Solatenol (benzovindiflupyr). It has to be the SDHI of choice against both brown and yellow rust.

While it may not have the immediate septoria activity of other SDHIs, its superior protective persistence is just what we need too.

In most cases, we’ll be pairing it with our preferred epoxiconazole/metconazole co-formulation to rotate the azoles and save prothioconazole for where we really want it at T3.

Adding boron
The valuable wheat responses we’ve seen from low rates of boron in recent years mean we’ll be including it with most of our T2s, along with the extra magnesium which is important for grain set.

Our spring barleys are also full of promise, having just had their T1s. With broad-leaved herbicides and trace elements as well as fungicides, some of these mixes were quite “challenging” – even without the sharp frosts we had in the second week of May.

So we shied away from a plant growth regulator to follow-up our early spray to stimulate tillering.

Instead, we will be putting it on with folpet (now we’re beyond chlorothalonil use-up time) at growth stage 37.

We find this timing particularly useful for ramularia control and it will avoid the temptation to bring our bixafen-based T2s forward, as well as guarding against any sudden growth spurts with the almost inevitable June rain.

While the least soil movement at drilling, good tillering and a great canopy size mean our barleys are hanging on to soil moisture fairly well, they could definitely do with another drink.

If our OSR doesn’t get some moisture soon pod fill could be disappointing once again.

But we’re on the horns of a serious dilemma here. Significant rainfall will trigger the sort of orange blossom midge emergence that would seriously challenge the many quality wheats in the ground without resistance.

At best, pyrethroid labels offer orange blossom midge emergence reduction and those that do aren’t the least harmful to beneficials either.

May has continued in extreme dry mode. The 12mm of rainfall we had early in the month seems a distant memory.

Root mass is poor in the slumped and compacted surface layers.

This season has engendered a perfect storm for yellow rust.

New races, breakdown in varietal resistance, and a winter which was too mild and a spring not hot enough to slow the epidemic have all favoured the disease.

Septoria remains at an unprecedented low level and no visible symptoms have yet been seen above leaf 5.

Forecasts up until early June show little prospect of rain, and without rain splash, septoria spread is limited.

Last year rain did appear in June and disease developed quickly. Also, do not ignore brown rust in a dry season. Crusoe is particularly susceptible.

Winter barley is now flowering, and all is complete apart from any pre-harvest treatments.

Blackgrass patches
Dense patches of blackgrass are now being selected for destruction with glyphosate.

Year in, year out this has proved an invaluable part of an integrated control strategy. Leaving these patches to harvest simply spreads the weed with the combine. 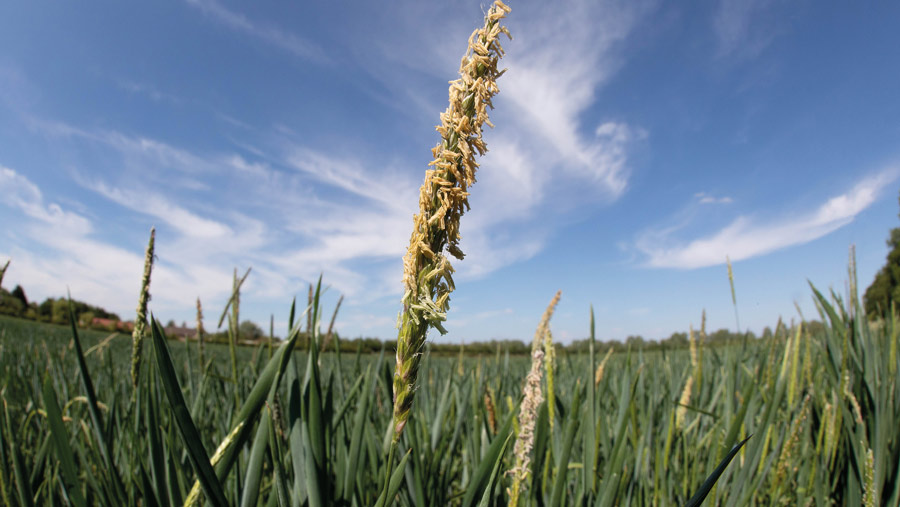 Spring barley varies widely, with the best crops on fertile ground looking thick and lush while later crops on difficult sites are struggling.

Brackling can be a major issue and late-season plant growth regulators may still be needed in some situations.

Ramularia is always a threat, particularly in stressed crops. Only folpet and Revysol (mefentrifluconazole) offer any control now that chlorothalonil is no longer with us.

Our small area of spring OSR has established far better than the winter crop it replaced. However, blackgrass has not been controlled by contact herbicides.

Future management strategy for this crop will be to plan it into the rotation, not simply use it to replace a failed winter crop.

That way grassweeds can be controlled over the winter with glyphosate before spring drilling.