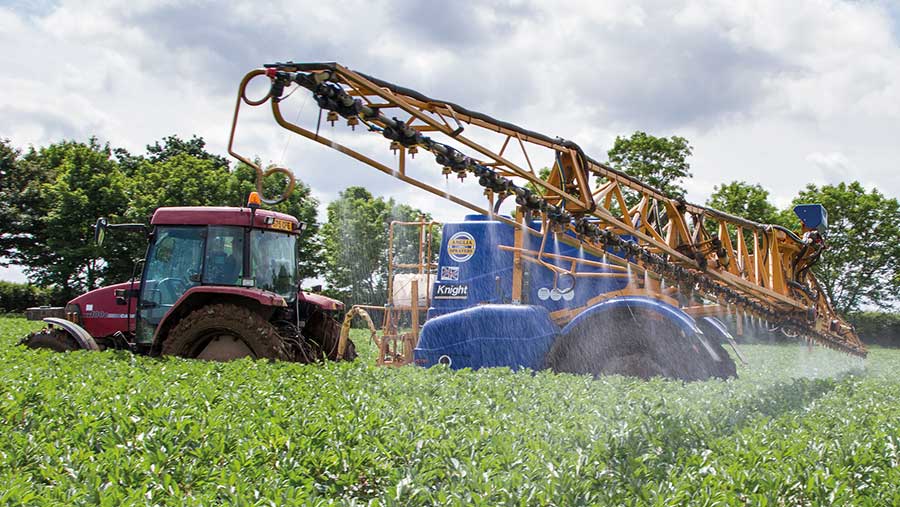 June is the time when grassweed problems become more evident, with ears above cereal crops, and bromes are proving to be a headache this summer, both in Scotland and the south.

Recent rains will test fungicide programmes in winter wheat, while many bean crops are at the stage for a fungicide application.

Not a familiar comment in Crop Watch is that the biggest challenge this month has been mice grazing the no-till potato trial plots at the Groundswell site in Hertfordshire. An interesting trial – unfortunately, mice in potatoes have very few control options. So it will be a case of hoping enough tubers remain undamaged and survive.

Back on the Downs, spring barley crops are looking much happier for their regular moisture deposits and have raced through the growth stages. For any crops still to receive a herbicide, or where there was a delay to allow more weeds to germinate following rain, it will mean there will need to be careful consideration to growth stage cut-offs.

Late growth regulation is often tricky in this crop, with the balance between stressing the crop and avoiding lodging. In general, where the crop is strong and likely to lodge then an ethephon-based growth regulator has been used, albeit the best results will come from earlier applications rather than leaving until flag leaf.

As the traditional earwash timings are just passing, wheats are all at some stage of flowering so are now past the stage at which effective control of some ear disease complexes can be achieved.

Thus the aim for any remaining T3 applications is to extend the period of foliar disease protection while offering some protection to the ear. With rust being such an issue, extending the period of rust protection this year by adding a strobilurin will be prudent.

Maize crops are varying in growth stage, with some only recently sown, but with recent rains weeds will germinate quickly and so control will need to be timely.

Strip-till maize combined with overwintered cover crops this year has worked well, and looks to be a promising way to establish maize reliably while reducing the risk of soil erosion. However, weeds within the strip are no less vigorous.

Many bean crops will be at the stage for fungicide application, winter beans receiving a second pass and spring beans a first application of tebuconazole + azoxystrobin.

Where chocolate spot has become established in the crop it is necessary to swap over to slightly more robust chemistry. Sadly there are no longer approved actives with very good control of chocolate spot. Elatus Era (benzovindiflupyr + prothioconazole) or Signum (boscalid +pyraclostrobin) offer good control of rust, but their abilities to control chocolate spot are very much more limited.

Showery weather and sunshine have boosted yield potential and crops look well as they move into their productive phase of growth.

Wheat ear sprays are being completed. For now, disease control strategies appear to have successfully kept the upper canopy leaves clean. However, following warmer and wetter conditions disease pressure is starting to build and there are visible differences between varieties with different resistance ratings in the amount of septoria on the lower leaves.

Yellow rust pressure is also high: active rust is evident in untreated areas or where weaker treatments/stretched timings have been tested in trials. Brown rust is also making an appearance in susceptible wheat and barley varieties.

For quality wheats, growers targeting a milling premium may be planning a final foliar nitrogen application at the watery to milky ripe stage. To avoid scorching the crop it’s important to be careful to make these applications in cool, dull conditions.

During grain fill also monitor crops for aphids on the ear, but only treat if close to guideline thresholds (as advised by AHDB). We haven’t had to treat for many years now.

Pulses should also be monitored for aphid populations. Pea aphid and black bean aphid can increase rapidly as temperatures rise. Again, applications should be made only when populations reach threshold.

For peas, treatment should be considered when 15% of plants are infested at early flowering. Remember to check product labels for the maximum number of applications per crop and the harvest interval. For instance, pirimicarb (such as Aphox) can be applied only once at maximum label dose of 280g/ha.

Monitor spring beans for bruchid beetle. These lay eggs on the young, tender pods at 1-2cm long, and eventually larvae make holes in beans. Control is often disappointing, as it is difficult to get insecticide spray onto the target deep in the canopy, and it could harm beneficials.

However, if you are minded to attempt control of this pest the trigger for treatment is at pod set when temperatures reach 20C on two consecutive days.

It’s time to reflect on the season using our “growing” experience to plan strategies for next year. Take some time to have a thorough look around the farm, assessing and mapping variations in crop growth, weeds and soil health.

Then use this knowledge and data to tweak planned cultivations, crop rotation and stewardship options to help make improvements.

And finally, enjoy visiting the shows and demonstrations. It’s time to meet friends, learn a little and get fired up for next season.

Recent wet weather has been ideal for septoria dispersion. Disease levels in the lower canopy are providing sufficient inoculum to further the epidemic.

A rise in temperature during the coming days will shorten latent periods. Much like last year, we will see fungicide programmes come under high pressure and expose any shortcomings in product performance.

Rusts and septoria remain the principal wheat diseases. Little mildew has been seen; I suspect due to the widespread use of prothioconazole in fungicide formulations.

The arrival of June has been accompanied by the appearance of grassweeds above crop canopies. Soft brome species are the most prevalent and becoming an increasing headache, especially in winter barley where no post-emergence herbicide options are available. Either these weeds are experts in camouflage or, as seems more likely, they are emerging extremely late.

Winter oats are now heading and, so far, disease levels are low following a comprehensive fungicide programme including extra intervention for mildew. Thick canopies of spring oats have also had mildew issues.

The winter oat crop looks noticeably short this year despite concerns about over-thick canopies early in the season. The crop is very prone to combinations of weather and plant growth regulators: even modest programmes have dramatically reduced crop height. Sadly, the prevalence of blackgrass has resulted in a handful of fields being consigned to silage and replaced by maize.

Pulse crops have thrived in the rain. Beans look well podded, and peas have developed dense canopies which can be prone to lodging. Disease spreads rapidly in lodged crops, so make sure fungicide programmes are in place. We use azoxystrobin + metconazole.

Linseed occupies a small but useful slot in some rotations. Canopies are dense, but limited options for broad-leaved weed control and restrictions on tank mixing and application intervals mean the sprayer has made repeated journeys through the crop.

The countdown to harvest is under way and, as always, the combine will be the final arbiter of the success or otherwise of our endeavours.

At this stage in the season, the bulk of crop protection is done, bar head sprays on wheat and some second fungicide applications on spring crops.

North of the border we have not had the challenge from yellow rust we saw last year, but septoria has been ever-present and I feel very strongly about growing varieties with good resistance. Most Scottish farmers grow soft Group 4s and some Group 3 (biscuit) wheats, and there is a big range in septoria resistance within both groups.

We are like the South West in that septoria is normally our main disease. I took a deep dislike to Leeds because of its weakness for mildew, and while the currently recommended Group 4s are not bad, there are a few weaker varieties in Group 3. These attributes will be studied closely at the trial sites when the open days come around.

Having used Revystar (fluxapyroxad + mefentrifluconazole) as the T2 treatment, I have avoided the issues with Univoq (fenpicoxamid + prothioconazole), and hope these will be resolved by next season.

Annoyingly, there are some bromes making an appearance where they should not be – and too late for Pacifica (amidosulfuron + iodosulfuron + mesosulfuron) or any other selective herbicide to be applied.

A review of autumn herbicides will be needed, and a higher rate of Liberator (diflufenican + flufenacet) around the endrigs looks necessary for some of these wheats.

Spring crops are growing apace and barley flag leaves are visible in many crops. Dry weather early on exacerbated manganese deficiency, but the rain came in time and most crops are looking well.

I have a few crops that look as though there could be some barley yellow dwarf virus present, and we will just have to hope it is not severe.

Spring wheats are growing even faster and the windy weather relented so that plant growth regulators could go on at the right timing. The varieties of spring wheats we are growing are more prone to rust and mildew than the winter varieties, and a robust programme is required to keep these problems at bay.